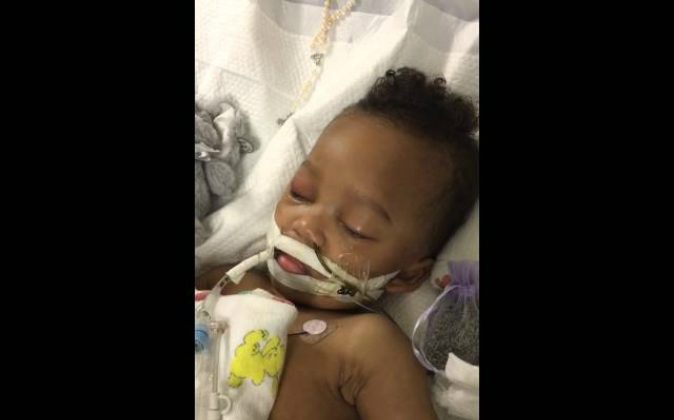 Sacramento parents of a two-year-old have been fighting in a federal courtroom in Sacramento on May 11 to keep their son, who has been declared brain-dead, on life support.

Israel Stinson has been hooked up to a ventilator for about six weeks, according to CBS Sacramento.

Nathaniel Stinson and Jonee Fonseca—Israel’s parents—said their son suffered a brain injury following an asthma attack on April 1. He was without oxygen for 40 minutes, they said.

Israel was then placed on life support at a local hospital in Sacramento; a neurological exam showed the child was brain-dead.

The little boy was transferred to Kaiser in Roseville, California, shortly after the discovery, where two other doctors also confirmed the previous doctor’s examination.

“Unfortunately it’s an irreversible condition, so there are ethical and medical concerns when you consider doing additional procedures on a patient who sustained brain death,” said Dr. Angelica Ha, a Pediatrician at Kaiser.

Fonseca wrote in a recent statement that, “Within 24 hours of being admitted to Kaiser, the hospital wanted to remove our son from life support.

“They said Israel would only live for a few days and his heart would soon stop beating. We were prepared to accept his death once his heart stopped. But one month later, Israel has proven the doctors wrong. He is a fighter!”

Jonee wrote she and her husband are “mentally and physically drained,” but, by the same token, spiritually they are “stronger than ever because we know that Israel is still very much alive!”

The Life Legal Defense Foundation, the organization supporting the Stinsons, recently uploaded a video on the family’s Go Fund Me page, which showed Israel responding slightly to his mom when she tickles him.

“A neurologist who recently watched a video of Israel’s movements said ‘Any head movement by a person, whether to verbal stimuli or spontaneously, reveals that there is intact functioning of the brain’ and that ‘it is completely illogical and against any brain death criteria standards to classify this child as brain dead,'” Israel’s mother wrote.

“The doctors who declared Israel ‘dead’ can see our son move his head and body in response to my voice. They listen to his beating heart. They tell me he is stable and that his organs are healthy. But they refuse to feed him. And because he didn’t pass their test—a test that was given almost a month ago-they want to kill him.”

Doctors are still convinced that Israel is, in fact, brain-dead, and that they have done all that they can do. Fonseca, on the other hand, still stands strong in her position.

“Are we pulling the plug too soon?” she asked. “I am a mother, not a doctor,” she wrote. “But I have started doing research into the brain and am learning new words like ‘neuroplasticity,’ which is the brain’s amazing ability to change and even to repair itself after severe injuries … ISRAEL IS NOT DEAD. HE IS ALIVE.”

A federal court decision would be made by the end of this week on the couple’s request for a preliminary injunction to stop Kaiser from taking their little boy off life support.