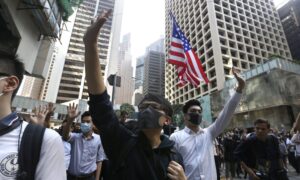 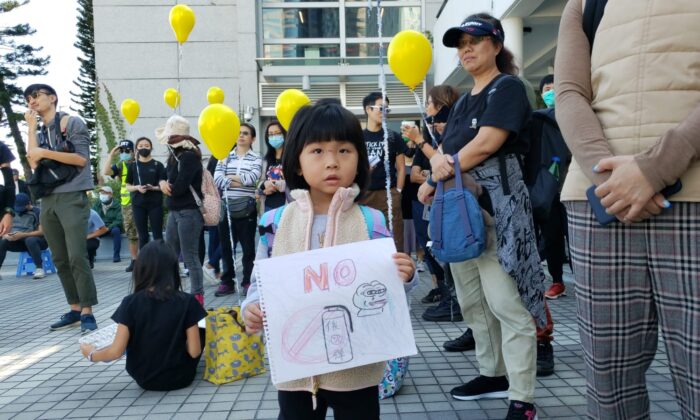 A girl holds a sketch showing no to tear gas at a rally at Edinburgh Place in Hong Kong, on Dec. 1, 2019. (Bill Cox/The Epoch Times)
HK Current Affairs

Yellow balloons with the words “No More Tear Gas” were flying high as many parents and their young children held a rally at a public square in the heart of Hong Kong’s business district on Dec. 1.

Hundreds of protesters showed up at the rally under the theme of “Children Don’t Want Tear Gas” at Edinburgh Place. At around 11 a.m. local time, they marched to the government headquarters, shouting slogans such as “No tear gas, return the city’s parks for me to play in.”

Many protesters then tied their yellow balloons on the rails outside the headquarters building.

Many parents with their young children at this morning’s rally and parade to call attention to police excessive use of tear gas and their potential harmful effects on children’s health #HongKongProtests pic.twitter.com/3nFJYyn3aA

Among those attending the rally was pro-democracy lawmaker Lam Cheuk-ting, who took to the stage to criticize how the city government has refused to publicly reveal the content of the tear gas fired by police or the impacts of the gas on human health.

The rally was organized by the local group Social Worker Home School.

Organizers called on Hong Kong police to stop using tear gas since the oppressive tactic has failed to restore calm to the city since mass protests broke out in June.

Additionally, organizers said many children have had allergic reactions to the gas, including rashes and sore throats after going to places that had previously been the sites of police clearance operations. They also expressed worries about the long-term health effects for their children as a result of being exposed to tear gas.

Parents have called on the city government to invite a third party to carry out chemical tests to find out the tear gas’s composition and alleviate parents’ concerns.

Hong Kong’s security secretary John Lee said at a legislative council (LegCo) session on Nov. 27 that police had fired a total of around 10,000 rounds of tear gas since June, Hong Kong media reported.

One of the protesters at the rally, Ms. Ho, 32 who lives in the Chai Wan area, told The Epoch Times that her 7-year-old daughter’s eyes are swollen and often become teary. The daughter’s condition worsened particularly after the police siege on City University of Hong Kong (CUHK) on Nov. 12. Ho added that she also has a one-year-old baby but she is afraid to take her out of the house.

Another protester, Ms. Lee, 39, said she was worried about the health of her 4-year-old daughter from all the tear gas.

“Don’t ruin the next generation,” Lee said, while calling on the city government to stop using tear gas.

Ms. Chau, 30, a resident in Tsuen Wan, recalled how she and her 3-year-old daughter were tear-gassed while they were recently out having food on a recent Sunday. She explained that at the time, most people near her were just normal citizens, not protesters with gas masks on.

Her daughter now coughs and has a lot of phlegm, and is taking a doctor’s prescription. However, Chau said the doctor did not really know how to relieve the phlegm symptoms.

“The government should disclose the tear gas components so doctors know how to treat,” Chau added.

Chau stated that her daughter sometimes loses her appetite because she doesn’t know how to cough up the phlegm and almost vomits.

U.N. High Commissioner for Human Rights, Michelle Bachelet, in an op-ed published in the South China Morning Post on Nov. 30, appealed to the Hong Kong government to conduct an “independent and impartial judge-led investigation into reports of excessive use of force by the police.”

A previous version of this article misstated the location where Ms. Chau was tear-gassed. The Epoch Times regrets the error.