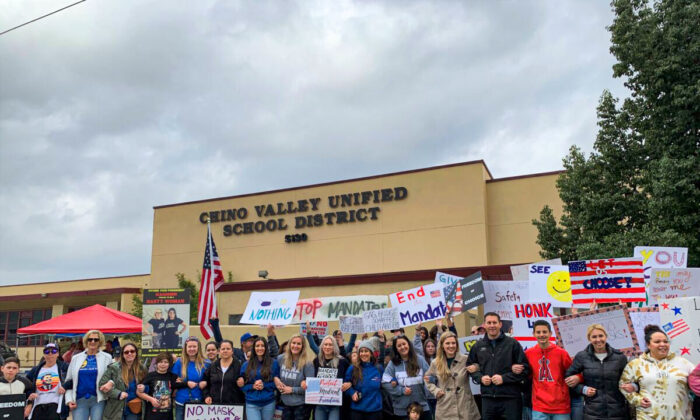 LOS ANGELES—Many parents lost patience when California lifted the indoor mask mandate for vaccinated individuals while delaying the decision for all K-12 students and teachers.

Hundreds of parents and students gathered in front of the Chino Valley Unified School District the morning of Feb. 15 to protest.

“It’s time for the kids to stand up for their rights and our parents to support our children in their right to choose whether they want to wear the mask or not,” Kadie Kirkpatrick, mother of a student, told The Epoch Times.

She believes that the prolonged mask mandate only brings harm and not much benefit for the students.

“They hate wearing masks. They do not want to go to school anymore. Everything is just sad and depressing at school,” she said.

With new COVID-19 cases and hospitalizations falling, California has decided to drop its indoor mask mandate beginning on Feb. 15, but students in the Golden State still cannot take off their masks at school. Kirkpatrick believes that “it makes zero sense.”

“Since the pandemic started, there’s just been so much emotional turmoil that the kids have gone through, “ she lamented. “When they see people at the Super Bowl, they see it everywhere except the kids at school wearing their mask, I think they’re not stupid.”

Many students joined the protest, holding slogans such as “End the Mandate,” “We Can’t Breathe,” and “Freedom of Choice.”

“We don’t want to wear masks eight hours a day,” Elena Ochoa, an 11th grader at Chino High School, told The Epoch Times. “We respect anyone who does and who has that decision, but we should be allowed to make that decision for ourselves.”

Ochoa said she was excluded from certain school activities because of the mask and vaccine mandates. Some time ago, she was looking forward to a trip her school organized for everyone, but was only to be told that everyone has to show vaccination status to be able to go. “That was unfair,” she said.

Some other students at the rally revealed that wearing a mask put pressure and stress on them, but if they did not wear a mask, they would be subject to discrimination and verbal abuse.

“I’ve been kicked out of class and told that I’m horrible for not wearing a mask. I’m killing off people,” said Kendall Hall, a student at Chino High School.

She was then isolated at a small dining table, but many students chose to sit together with her. The incident sparked anger and protests from many parents. However, the school authorities “haven’t apologized once for it,” according to Hall.

“We need to get rid of the discrimination against masks in these mandates,” she said, adding that students often need to get out and take off the mask to get some fresh air. “I’m not telling you to take your mask off. I’m just saying please let it be a choice,” she said.

Christina Gagnier, president of the Chino Valley Unified School District Governing Board, did not respond to The Epoch Times’ inquiry as of press time. Meanwhile, Andrew Cruz, the school board’s vice president, responded clearly that the schools should let parents and students “choose what they want.”

“There is NO LAW that requires the masking of our children,” Cruz wrote.

In a follow-up phone conversation with The Epoch Times, Cruz said he felt frustrated that the school district failed to suitably address parents’ concerns, and he plans to raise the issue again at the next school district meeting.

“The next step, we’ve already been hitting our county and our state with the same kind of complaints, will continue to push, and the next step is to go after the teachers union for what they’re doing to our children,” she told The Epoch Times.

At a press conference held on Feb. 14, California Health and Human Services Secretary Dr. Mark Ghaly said the state would wait until Feb. 28 to potentially change masking rules at schools.