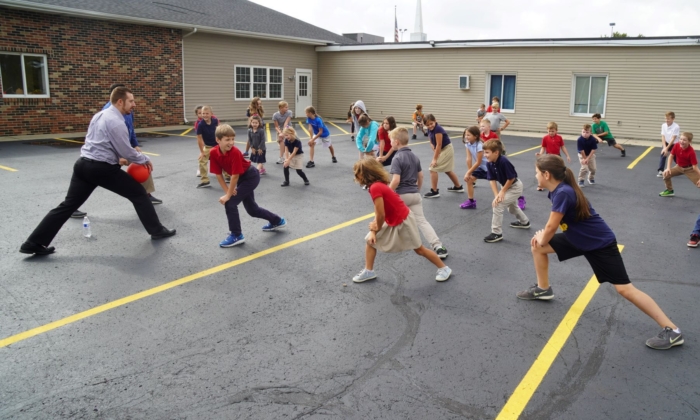 A group of Michigan parents is seeking to overturn a long-standing state constitutional amendment outlawing public funding of private and religious schools.

One of the plaintiffs, Jessie Bagos, told The Epoch Times: “To have the federal court declare the so-called Blaine Amendment unconstitutional will open up real school choice for all the people of Michigan.”

Bagos, a mother of twin first-grade boys, said: “This is a step in a much bigger process. Without this step, thousands of parents will have no alternative but the public school. They will have nowhere else to go.”

School choice is very important to Bagos and her husband, Ryan.

“Because,” she said, “our public school district handled the pandemic horribly. Two young boys forced to do kindergarten on a computer! Can you imagine? They cried every morning.

“We believe our children were harmed by that experience. One son developed anxiety. He just kept clinging to me and crying.

“Ryan and I wanted to switch the boys over to St. Mary’s (a nearby religious school). It stayed in-person all year long during the 2020­­–2021 school year. But, we couldn’t afford it.

“I never want to be in that position again. I want choice!” Bagos said.

In August, at the suggestion of a friend, Bagos asked for help from the Mackinac Center, a free-market think tank based in Midland, Michigan.

By mid-September, the Bagoses had joined four other Michigan families and the Parent Advocates for Choice in Education Foundation as plaintiffs in a complaint filed on Sept. 23 in the U.S. District Court, Western District of Michigan, Southern Division.

The plaintiffs are suing Michigan Gov. Gretchen Whitmer, a Democrat, and State Treasurer Rachael Eubanks in their official capacities.

The suit asks the court to overturn as unconstitutional Article 8, Section 2, Paragraph 2 of the state constitution, which prohibits public funds from going to private or religious schools, and to rule on the constitutionality of other state statutes and policies.

The complaint alleges that the state constitution violates the free exercise clause of the First Amendment to the U.S. Constitution on the grounds of religious animus, differential treatment, and “conditioning the availability of benefits on a recipient’s willingness to surrender its religiously impelled status.”

The complaint also alleges that Michigan law violates the equal protection clause of the 14th Amendment to the Constitution by the “creation of political structure that discriminates against religion.”

According to the complaint, discrimination occurs when parents contributing to the Michigan Education Savings Plan are treated differently.

A couple may contribute to a plan up to $10,000 annually, receive a tax deduction for it on their state income tax form, and use the money to pay for school tuition at a public school they like outside of their district of residence. However, under state law, another couple who uses the same money to pay for tuition at a religious or private school will lose the deduction.

“That’s unfair!” said Bagos. “It’s my money. Can’t I spend it where I want to? Why are they telling me what to do with it?”

The complaint also alleges Michigan’s private secular schools can request to be changed into charter schools, which enables them to receive public funding. Private religious schools aren’t afforded that opportunity unless they sacrifice many of their beliefs and values.

Pastor Jared Witkowski, of Community Baptist Church of Kimball, told The Epoch Times that he would be “leery” of accepting public funds to help support the Christian school at his church because of possible “strings attached.”

“I think money should go to the parents and the government should leave its hands out of the church,” he said.

Patrick Wright of the Mackinac Center, one of the lead attorneys on the case, told The Epoch Times that the complaint would be defended by lawyers from the office of Michigan Attorney General Dana Nessel, a Democrat.

“We are encouraged by the U.S. Supreme Court’s recent interest in religious liberty cases. If successful, this case will bring educational choice to Michigan’s 1.6 million schoolchildren,” said Wright.

Ben DeGrow, director of educational policy at the Mackinac Center, says of the lawsuit: “It is a significant case. Victory would mean the extension of educational and religious freedom. It will help thousands of families find, and help them afford, a better education for their children.

“The health and future of our nation depends on a well-informed citizenry. Not just academically well-prepared, but also in the understanding of the values of our country that can guide them for the rest of their lives.”