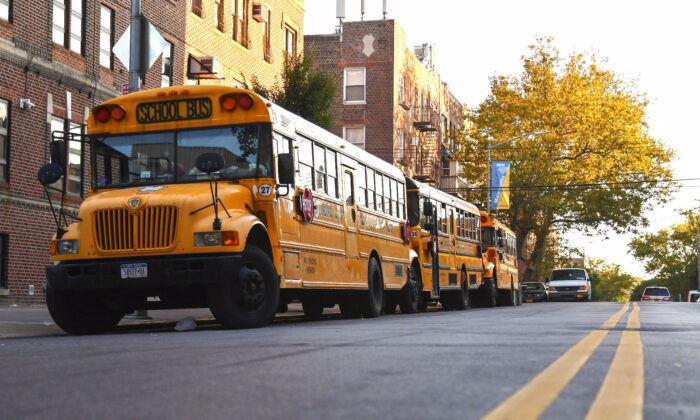 School buses are seen parked in the Brooklyn neighborhood of Borough Park in New York City on Oct. 6, 2020. (Angela Weiss/AFP via Getty Images)
US

“As long as I am on this earth, I am going to teach children what I feel they need to know.”

These were allegedly the words of Mt. Lebanon School District first-grade teacher Megan Williams, who earlier this year told the mother of one of her students that she would continue teaching about gender dysphoria and transgender transitioning to 6- and 7-year-old students—even if doing so goes against parents’ wishes, according to a lawsuit filed in Pittsburgh federal court on June 8 by three mothers over the matter.

The lawsuit names the school district in the suburb of Pittsburgh, as well as Williams, senior administrators, and school board members over what the parents say amounts to “grooming”—a term used to refer to adults psychologically creating emotional bonds with children to lower inhibitions.

According to the lawsuit, Williams showed students a video called “Jacob’s New Dress” to their children last fall, telling the students that her child had worn an “Elsa dress” for Halloween. When one of the moms raised concerns about this at a parent-teacher conference, Williams told her there was a misunderstanding and that the confusion was about Halloween—but then continued to teach the children about gender dysphoria anyway, the lawsuit states.

“Williams explained to this young boy that ‘doctors can get it wrong sometimes.’ In the course of these private discussions, Williams also told this young boy that she ‘would never lie to him’ and, if the subjects they were discussing came up at home, to say ‘I heard it from a little birdie.’”

The lawsuit argues that this behavior amounts to grooming.

“In other words, upon information and belief, while having private discussions with this young boy about topics related to gender dysphoria, she told the child not to tell his parents about the discussions,” the lawsuit states. “Williams’ ‘grooming’ of this young student is unconscionable.”

The lawsuit adds that the discussions peaked on March 31, 2022—Transgender Day of Visibility—when Williams allegedly provided direct classroom instruction on gender dysphoria and transgender transitioning to her captive audience of 6- and 7-year-old children.

In the course of doing so, she explained to her students that sometimes ‘parents are wrong’ and that parents and doctors ‘make mistakes’ when they bring a child home from the hospital, according to the lawsuit.

After one of the mothers pulled her child out of Williams’s class, she received a call from Williams’s private phone number several weeks later.

“Under no circumstances was this call appropriate for Williams to make.”

The lawsuit seeks a U.S. district court order prohibiting the school from teaching gender dysphoria and transgender transitioning—or, at the minimum, to require the school to allow parents to opt out of such education.

The lawsuit stresses that the complaints aren’t related to politics, nor is it anti-transgender or anti-LGBT.

“Rather, it is about Plaintiffs’ parental rights and each of their respective decisions not to want their 6- or 7-year-old child to receive first-grade classroom instruction on gender dysphoria or transgender transitioning from their first-grade teacher,” the lawsuit states.

Neither the school district nor Williams responded by press time to messages from The Epoch Times seeking comment on the lawsuit.