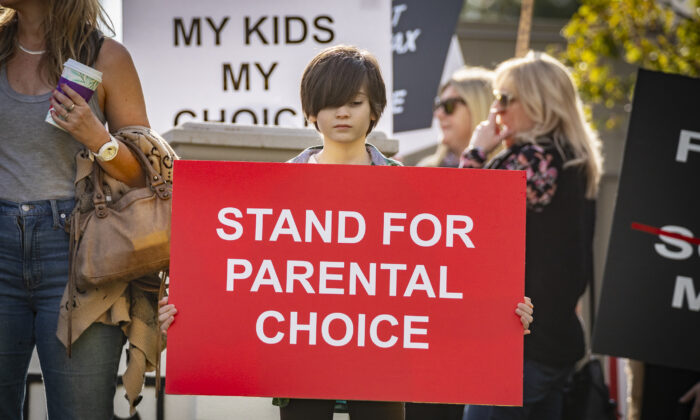 Corey DeAngelis, national director of research at the American Federation for Children (AFC), says parents across party lines share the sentiment that political candidates should advocate for parental rights and school choice, or face defeat in the November midterm elections.

In an interview for NTD at FreedomFest 2022, DeAngelis said school choice is popular and politically advantageous, and that at this moment in the United States, coming out against parental rights in education is akin to political suicide.

“We’ve seen a lot of victories over the past couple of months, in the primaries in particular,” he said. “About 75 percent of the candidates who are supported by AFC Action Fund and our state affiliates moved on to either run-offs or won their primaries outright,” said DeAngelis.

DeAngelis believes that any candidate who wants to win their November midterm election should have parental rights and school choice on their platform, and that Republican candidates supporting school choice are outperforming their rivals.

“At some point, I think if more Republicans start to run on this, Democrats are going to have to start to adopt the policy, too, because it’s going to become so politically disastrous that it’ll become a nonpartisan issue in time,” he said.

“I think Republicans can do well to lean into education more than they have historically. It’s a political winner,” said DeAngelis.

A poll of more than 2,000 registered voters by RealClear Opinion Research showed that 72 percent of respondents said they support school choice, with only 18 percent opposed.

AFC had a big victory in Arizona recently with school choice becoming the law of the land, despite teachers unions and Democratic opposition.

In early July, Arizona Gov. Doug Ducey signed H.B. 2853 into law, which guarantees that any parent of an Arizona K–12 student can access funds to put toward the education that best fits their child’s needs.

“This is what we’ve been fighting for, for a very long time: to have the funding follow the child to the institution that best meets their family’s needs and aligns with their values,” DeAngelis said. “I hope other states will learn from the victory in Arizona and empower families and fund students, not systems.”

In a statement about the bill, Ducey said Arizona children will no longer be locked in underperforming schools, and that the new law will provide “a whole new world of opportunity” for students and their parents.

“The Democrats all voted against it in the [Arizona] Senate and the House, and the teachers unions fought as hard as possible against empowering parents because they want to protect their monopoly,” DeAngelis said. “They don’t want to have to compete.”

School choice is essential because the competition from families being able to choose their schools will force public schools and colleges and universities to have higher educational standards, he said.

“[Teachers unions’] main argument is that they’ll say, ‘This will destroy the public schools’ or ‘It’ll defund the public schools,’ to which I respond, ‘Well, why would that happen if you’re doing a good job and you’re meeting the needs of families?’” said DeAngelis.

Education funding should be used for educating children, not for propping up and protecting particular institutions, whether public or private, he added.

“They saw the private schools were open right away. They saw that the teachers unions were lobbying the [Centers for Disease Control and Prevention] to keep the schools closed,” said DeAngelis.

DeAngelis said Democrats are going to have to change their midterm strategy because even their own polls show parents are not satisfied with the current public education system.

The American Federation of Teachers commissioned its own poll from Hart Research Associates (pdf), which found voters in battleground states were more likely to support Republicans than Democrats on the issue of education, and the majority were dissatisfied with public schools in their current state.