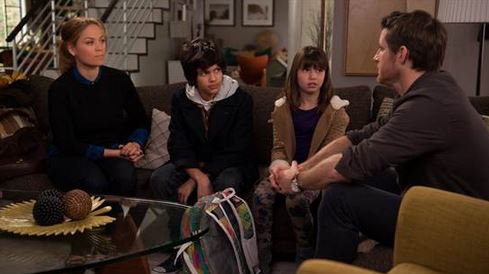 Parenthood season 6 starts in around a month and fans are looking for insight into what will happen in the upcoming season.

Julia and Joel are two figures important to many fans, and their situation will be resolved one way or another in the final season.

Executive producer Jason Katims told TVGuide that he’s cautiously optimistic about the couple’s future but stressed that they still have  a lot of work to do.

“I don’t want to come back and suddenly they’re fine and everything is normal again,” he said.

“It would be cheating the audience out of seeing what happens. While there was definitely a ray of hope there, I don’t think it’s resolved yet. So we’ll see what we can do in 13 episodes to get them through the crisis.”

Bustle, noting a story in which Katims teased that the season will have a “larger story” that affects everyone, said that one of the reasons it believes that Zeek Braverman could die in season 6 is it would help bring Julia and Joel together.

“Admit it, you want these two back together again just as much as I do. And as sad as Zeek’s death would be, it could serve as a motivator for this couple to find their way back to each other,” it said.

“Like it or not, death tends to have a way of bringing people closer, and Julia will certainly be in need of a shoulder to cry on. Come on, Joel — this is your shot to become the man you once were.”

Season 6 is slated to premiere on Thursday, September 25.