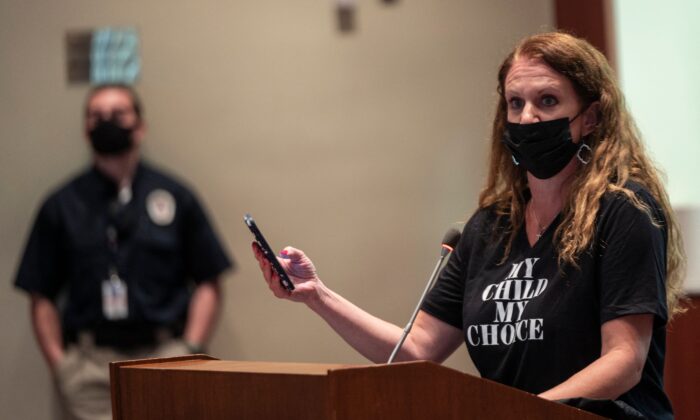 Patti Hidalgo Menders speaks out against board actions during a Loudoun County Public Schools (LCPS) board meeting in Ashburn, Virginia on Oct. 12, 2021. Loudoun county school board meetings had become tense with parents clashing with board members over transgender issues, the teaching of Critical Race Theory (CRT) and Covid-19 mandates. (Andrew Caballero-Reynolds/AFP via Getty Images)
Social Issues

Between 50 and 200 parents contact her organization every week because their schools teach lessons that promote transgenderism, Critical Race Theory, and other liberal ideas.

This year, about half of the tips she has received have been about schools teaching transgenderism, she said. But in the past, most complaints were about Critical Race Theory-related teaching.

“These kinds of lessons take place from coast to coast,” Neily said. “Why are these activists so bound and determined to rip our children’s innocence away from them?”

Nationwide, America’s schools are promoting transgenderism to young and impressionable children, she said. But parents often fear fighting back.

“They credibly fear retaliation, both against themselves as well as their children,” she said.

Nationwide, schools have changed the way they educate students about gender, Neily said. This change has often happened without parents’ knowledge.

“These are kinds of discussions and decisions that many parents want to make for themselves. They don’t want schools talking about these issues with their children,” she said.

Many schools teach even young children about radical gender theory and transgenderism, she said. These teachings often aren’t limited to a single class. Instead, they permeate the entire curriculum.

One Atlanta parent told her that when he tried to opt his kindergartner out of sex education, administrators responded that it would be impossible, Neily said.

“The school’s response was, ‘Well, we can’t do that. It’s in everything,’” she recalled. “‘It’s in math. It’s in science. It’s in social studies. It’s in reading. He said, ‘Time out. Why are they teaching my child about sex in math class?’”

Ideological gender education has rapidly swept across America, even into communities that don’t want it, said Neily. She described the phenomenon as a “tidal wave” that overrides community choice.

“It removes all the decision-making process from the community. It almost certainly doesn’t comport with the values of many small towns,” she said.

Schools often hide radical indoctrination behind a screen of obscuring terminology, Neily said. Her website offers explanations of typical terms and their meanings.

Often, classes titled “social and emotional learning” or “ethnic studies” encourage radical ideas like changing gender identity or seeing the world as a war between “good” and “bad” races.

To cut through this web of confusing terminology, parents must ask the right questions, Neily said.

School board deflections can make parents look like the crazy ones.

“Maybe you say the wrong thing at one of those public meetings and suddenly, you’re the neighborhood Q-Anon guy for the rest of your life,” she said.

One of the group’s strongest weapons is the media, she added.

“It starts to force a level of accountability into the system that, frankly, previously didn’t exist because a lot of these people operated behind closed doors,” she said.