'It made me feel very, very small as a parent. I was unaware of anything' 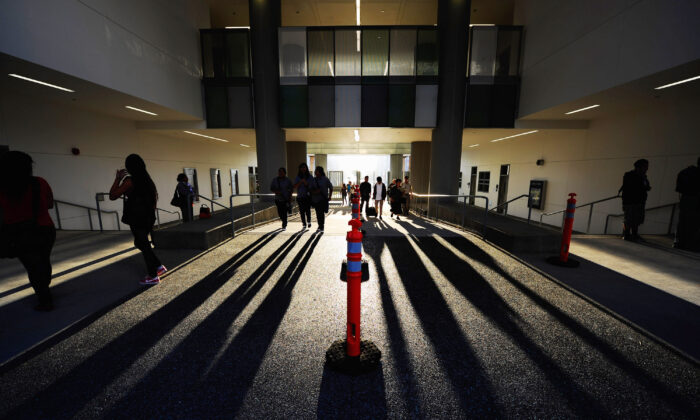 In this file photo, students arrive at school in Los Angeles on Sept. 13, 2010. (Kevork Djansezian/Getty Images)
By Brad Jones

Parents outraged over school staff who allegedly disguised the names of Gay-Straight Alliance (GSA) clubs at a California middle school are planning to voice their concerns at a school board meeting this week in Salinas.

Jessica Konen has alleged that school staff indoctrinated her then 12-year-old daughter in an LGBT club disguised as an “Equality Club.” She told The Epoch Times she plans to speak at the Dec. 15 meeting at Spreckels Union School District (SUSD) during public comments.

Two teachers at Buena Vista Middle School in Salinas were recorded coaching other teachers to conceal the nature of LGTBQ clubs from parents at a sold-out California Teachers Association conference held in Palm Springs, California, from Oct. 29 to Oct. 31. The CTA event was billed as the “2021 LGBTQ+ Issues Conference, Beyond the Binary: Identity & Imagining Possibilities.

The teachers led a workshop called “How we run a ‘GSA’ in Conservative Communities,” and described the obstacles that they face as activist teachers to conceal the activities of GSA clubs from parents.

SUSD officials have not responded directly to inquiries but SUSD did post an alert on its website notifying the community that school staff involved in the alleged incident have been suspended pending an independent third-party investigation.

Konen claims that one of the teachers coaxed her daughter to join a lunch-hour “Equality Club” and began affirming her daughter as transgender.

Near the end of sixth grade, Konen’s daughter told her she might be bisexual, and by the middle of the seventh grade, Konen was called to the school for a meeting with her daughter, a teacher, and the school principal.

The teacher told Konen her daughter was “trans fluid.”

“I sat across the table, and I was crying. I was trying to absorb everything.”

“They kept looking at me angrily because I kept saying ‘she,’ and that it was going to take me time to time to process everything,” she said. “I was very confused. … I was very upset. I was blindsided—completely blindsided.”

The teacher accused Konen of not being “emotionally supportive” of her daughter, who was to be called by a new name and male pronouns and would be using the unisex restroom at school.

“I felt she completely coached my child,” Konen said.

Konen said she was hurt that her daughter had not come to her first and the teacher acted in mean-spirited “smirking” way towards her.

“It made me feel very, very small as a parent. I was unaware of anything. Not one time had she mentioned to me ‘Oh, I think that I want to change my name,’ or ‘I’m transgender’ or anything. Nothing. I only heard bisexual one time, and that was it,” Konen said.

Within a few days of the meeting, the King City Police Department showed up at her door and told her that there had been a complaint made to Child Protective Services (CPS). The police questioned her two children and asked them if they wanted to be removed from the home.

“They made me feel like a monster,” she said.

But Konen complied and took her children to meet with CPS that week.

According to Konen, CPS dropped the case and did not demand she call her daughter by masculine pronouns as her teacher had insisted.

Throughout the school year, Konen was afraid to ask questions about her daughter or her school activities, fearing that CPS could take her children away.

After several meetings with the teachers, Konen discovered the school knew her daughter had searched online for information about suicide, but never told her about it, she said.

“They failed to tell me that part, so I was very angry, and after that it has just been downhill,” Konen said.

“It is not OK” for teachers to keep parents in the dark about gender identity issues or anything else, Konen said.

Her daughter, now 14, left Buena Vista and is now attending a new school where she’s using her female birth name and feminine pronouns.

Konen asked her daughter if she was sure and told her it was OK if she wanted to use the male name and pronouns her teachers had used at Buena Vista, but according to Konen, her daughter responded, “Mom, they’re not good people.”

“Things are better. She’s in a different school, different surroundings. Nobody is really pressuring her,” Konen said.

Konen’s father, Gunter Konen, told The Epoch Times he can’t believe the way the school treated his daughter and granddaughter.

“I’ve watched my daughter—what she went though. It really broke my heart,” he said. “My daughter’s done nothing wrong. If anything, she’s too much of a good mom.”

He blames the school for getting police and CPS involved.

“Right is right, wrong is wrong,” he said. “I think it’s not their place to teach what they’ve taught to my granddaughter.”

He said parents are unaware of what’s being taught to their children by teachers.

“What goes on in the schools? What’s the criteria that’s being taught? I mean, the things that are being taught in school kind of made it through the cracks,” he said.

‘It’s Happening Across the State’

Another mom of a gender dysphoric daughter who goes by the pseudonym Charlotte Jacobs told The Epoch Times the Konens’ case is not uncommon and is almost the same as hers.

“It’s happening across the state in California. It happened to me,” Jacobs said. “When I spoke with the school administration where my daughter was attending school about the name change, a few days later CPS was at my doorstep.”

Calling the police or CPS is a way to pressure parents to follow certain gender ideology, she said.

“It’s extremely scary for parents to have CPS show up at their home over a name. It’s unexpected, and we’re caught off guard. Our parental rights are being trampled on by a teacher who may or may not have our child’s best interest at heart,” Jacobs said.

Cheryl Duffus, whose children attended Buena Vista Middle School, has repeatedly complained to the school over the last six years and warned that LGBT activism in the classrooms and on the school grounds had escalated beyond acceptable levels.

When she learned of reports that Buena Vista teachers had coached other teachers how to hide GSA Clubs from parents, Duffus was outraged.

“I was shocked,” she told The Epoch Times.

“I knew things were going on at that school. I had no idea about the deceit that was going on, the preying on children, and the lying to parents. I knew they were passionate teachers and that their agenda was spilling into the classroom, but I did not know that it had gone that far. I was mad. I mean, I was beyond mad,” she said.

“I do have several friends whose kids went to Buena Vista who are struggling with gender, and immediately … I wondered if they would be struggling if they didn’t go to that school,” Duffus said. “Would they be? Were they pushed?”

The level of activism in Salinas schools has reached the point where something must be done to curb it, Duffus said.

“It’s a disaster zone,” she said. “Somebody has to stand up and do the right thing or our whole town is lost,” she said.

Mike Lipe, whose children attended Buena Vista before he chose a homeschooling option, opposes sexual education of any kind in public schools.

He told The Epoch Times the SUSD school board and administration has become “radicalized.”

The board and administration assured Lipe in July that “there was no type of comprehensive sexual education going on at the school except in the eighth grade for a few short days once a year,” he said.

“So, this pretty much leads me to believe that they’re dishonest,” he said.

Lipe wants to see “any and all sexual-related clubs and/or education” cease until there has been a thorough investigation.” That includes the teachers and any other staff who were running the clubs, the principal, the school superintendent and the SUSD president, he said.

SUSD School Board President Steven McDougall has not responded to inquiries.