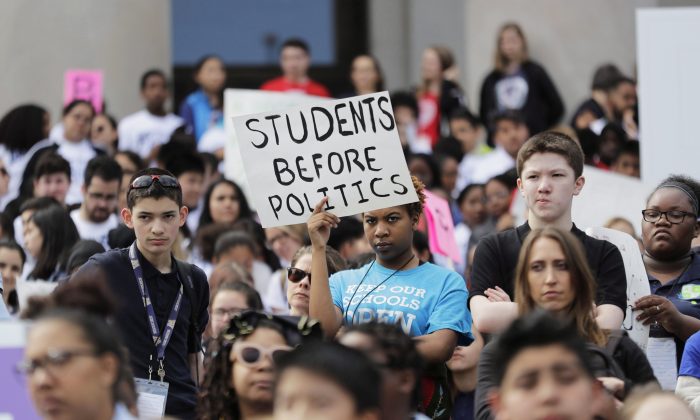 To allow schools to be free of Critical Race Theory (CRT) parents must break the unions, parental rights activists say.

This school year, Moms for Liberty leaders Tiffany Justice and Tina Descovich have mounted a nationwide campaign to end union control of schools.

“Let’s start the new school year right—by ending the reign of the powerful teachers’ unions who care more about pushing woke ideology and rewriting forms to say ‘birthing parent’ instead of ‘mom’ or ‘dad,’ than they do about improving reading scores or closing the growing learning gaps in our country,” the group’s press release reads.

Teachers have pushed CRT into the classroom at a time when many students are failing to learn how to read, said Justice.

According to nationwide surveys, only about a third of 4th Grade students read proficiently at a 4th Grade reading level in 2019.

At the same time, reports of teachers giving children political instruction in CRT, transgenderism, and other left-wing ideologies have increased greatly.

Teachers’ unions like the National Education Association (NEA) and the American Federation of Teachers (AFT) have long been bastions of Democratic political power, she said.

Rather than ensuring teachers get good pay while giving children a good education, they have focused on making education ideological, said Justice.

“What we’ve seen over the past 40 years in education in America is a real shift away from giving children practicable skills to making them into social justice warriors,” she said.

Moms for Liberty encourages teachers to leave these unions to stop their promotion of left-wing education, Descovich said.

“It’s vital that teachers understand there [are] options out there, they do not have to be a member of the union,” she said.

For many parents, COVID-19 led to new discoveries about schools, Descovich said. During the pandemic, parents got to see the lessons their kids received. Often, they didn’t like what they saw.

“I think they’ve been shocked to see gender ideology being pushed in the classrooms, the division between race, the Critical Race Theory,” she said.

While the pandemic was a time for parents to learn, now is a time for them to act, Moms for Liberty leaders said.

“The start of the 2022-2023 school year is a perfect time to end the woke union bosses’ death grip on innovation, excellence, and freedom in public education,” the Moms for Liberty press release reads.

Moms for Liberty has a two-part strategy to break union power, according to its press release.

It will encourage teachers to leave unions in states where they can do so, and it will inform parents about school performance.

As unions like the NEA have spread across America, they have allied with school system administrators to protect a bloated bureaucracy, said Justice.

“We see more and more money being spent on public schools,” she said. “And yet, the teachers aren’t being compensated better.”

Although the Supreme Court has ruled that it’s illegal to force teachers to pay union dues if they don’t want to, sometimes unions do so anyway.

In many states, even non-union members have to pay unions for their role in collective bargaining. In other states, social pressure to remain in a union plays a major role, said Descovich.

“The unions will say, ‘If you get in trouble, if somebody accuses you of something, the only person that’s going to be there for you with us,” she said.

“The unions have become the foot soldiers for the Left in America, the very most progressive fringe Left,” she said.

Justice said she strongly believes American teachers are already breaking from the unions.

“I think that the education curtain has been pulled back, and all of America now recognizes that the union bargains for the people at the table, not for the teachers on the ground,” she said.

Parents can also pressure schools to change their curriculum, said Descovich. But often, schools have pushed back against parents.

In union strongholds, some Moms for Liberty supporters have lost their jobs due to union member harassment of their employers, she said.

One mother got the FBI called on her. It has been a struggle to get school boards to listen to parents.

“It’s been about as nasty as you can imagine where there are union strongholds,” said Descovich.

Moms for Liberty has more than 200 nationwide chapters, Descovich said. Despite these setbacks, many chapters have met with success in placing parental rights advocates on school boards.

“The unions need to understand that teachers in schools, their primary duty is to educate children,” said Justice.