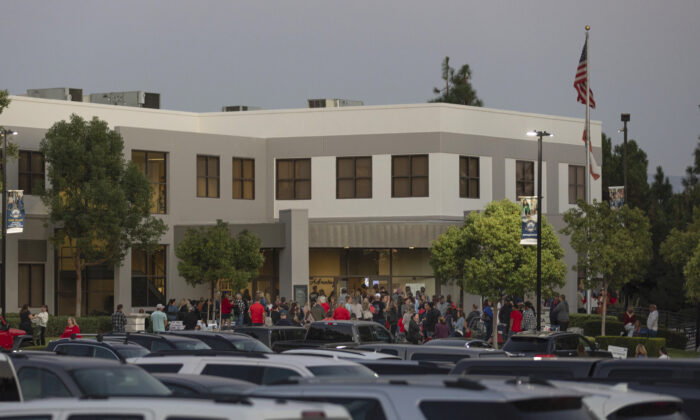 On April 5, the Placentia-Yorba Linda School Board voted to ban Critical Race Theory (CRT) in the district’s classrooms. Opponents of the ban said CRT actually was not being taught. Retorted Trustee Leandra Blades, who favored the ban, “To say that it’s not being taught, it’s just not true. My kids have been taught CRT.”

Although presented as just a way of teaching about racial problems in American history, CRT instead is a type of Cultural Marxism that turns different races against one another.

According to a Goldwater Institute study, “Critical Race Theory is a perspective on modern life—a worldview—that believes all the events and ideas around us in politics, education, entertainment and the media, the workplace, and beyond must be explained in terms of racial identities. … Even George Washington, Abraham Lincoln, and the U.S. Constitution itself are subject to being canceled out of American culture—such as being removed from the names of public schools—for failing to live up to the standards set under Critical Race Theory.”

The Placentia-Yorba Linda action is bound to lead to more school boards “canceling the cancelers” by banning CRT. But more actions protecting children are spreading around the country.

Also on April 5, Election Wizard wrote in a tweet, “Menomonee Falls, Wisconsin—Three conservative ‘Moms on a Mission’ have swept the three school board seats in Menomonee Falls, ousting two liberal incumbents.” Explained Waukesha County Republican Party Chairman Terry Dittrich, “CRT and other things that have caused a lot of concern by parents and the average citizen and that’s really driven their interest in local races.”

In February, even liberal San Francisco recalled three far-left school board members for trying to “cancel” George Washington and other worthies from the names of public schools. They also tried to dumb down the merit-based admissions of Lowell High School, the honors and Advanced Placement-based school, which is 71 percent non-white.

Explained journalist Kenny Xu on The Federalist a year ago, before the recall, “Ultimately, the elimination of Lowell’s merit-based system represents, yet another victory for the ‘equity’ advocates who use the narrative of systemic racism to tear down San Francisco’s centers of excellence in the name of diversity and desegregation.”

In CRT-speak, “equity” means a socialist leveling of all in society, destroying achievement and excellence. It replaces “equality,” which since the 1960s has meant treating everyone equally.

Mistreating the parents also was a major theme in last November’s victory by Republican Glenn Youngkin in Virginia’s governor’s race. The Democratic candidate, Terry McAuliffe, blabbed about how many politicians, schools bureaucrats and teachers’ unions officials think about parents, “I don’t think parents should be telling schools what they should teach.”

At his final campaign rally, McAuliffe even trotted out his main supporter, American Federation of Teachers (AFT) President Randi Weingarten. That happened even though she earlier was revealed as a major influence on the Centers for Disease Control keeping schools across the country closed far too long during the pandemic.

According to the New York Post, “The lobbying paid off. In at least two instances, language ‘suggestions’ offered by the union were adopted nearly verbatim into the final text of the CDC document” on the shutdowns.” Yet Weingarten is not a medical doctor nor an epidemiologist.

The AFT’s state affiliate is the California Federation of Teachers.

Last July, Weingarten hosted a discussion with Ibram X. Kendi, a major CRT theorist. As related on the AFT website, Secretary-Treasurer Fedrick “Ingram asked Kendi about the furor over critical race theory and related pushes against teaching about enslavement and discrimination. Kendi compared it to the reaction to Brown v. Board of Education, when some white people were fearful that desegregated schools—and the Black children in them—were going to be harmful to their children. Today’s fears are similar in that misinformation is being spread about potential harms; one bold lie is that teaching about racism conveys to white children that they are inherently evil. Kendi was clear and compassionate: He does not know of any anti-racist teacher who would believe or convey that any child or group of people is inherently bad or racist.”

Actually, the Brown decision was about allowing black students to attend on an equal basis neighborhood schools their parents helped pay for. The curriculum was not an issue, and was the excellent curriculum that, for all, emphasized science, math, languages, and real history.

Moreover, as Newsweek headlined last July, “‘CRT Teaches My Daughter Her Mother Is Evil’: Father Gives Testimony Before School Board.” It reported, “A father at a school board meeting blasted critical race theory (CRT) for teaching his daughter that ‘her mother is evil,’ in his words, and influencing students of different races ‘to hate each other.’

“Ian Rice, a parent in Caledonia, Michigan, spoke out against CRT, calling out the district’s schools for ‘failing’ students, including his own two children. … Rice, who is black, also said the teaching of CRT has been especially harmful to his daughter. ‘Critical race theory is teaching that white people are bad. That’s not true. That would teach my daughter that her mother is evil.’

“He also brought up an instance where a teacher pulled his daughter aside and told her, ‘Well, you’re a minority, so you know better than to engage in certain things,’ which elicited gasps from the crowd around him.

“He mentioned that his daughter was ridiculed after he initially brought up the matter to the school board.”

Caledonia is a small, rural city southwest of Grand Rapids. If CRT is being imposed there, where is it not being imposed?

Coming back to California, there obviously will be no reform from the legislature because Democrats control supermajorities in both houses. That means the fight will be in local school boards, eyeball to eyeball. At the state level, the only hope of reform will be putting an anti-CRT initiative on the ballot in 2024.

All these anti-CRT measures likely will end up in the courts. The California state courts, including its Supreme Court, could stymie reform efforts. Then again, justices are aware they can be recalled, as happened in the Rose Bird recall in 1986. Largely over their softness on the death penalty cases, Chief Justice Bird and Justices Cruz Reynoso and Joseph Grodin were ousted by voters.

With schools becoming an even more contentious issue, today’s justices would have to tread lightly to keep their jobs. Rejecting the democratic choice of local school board voters, or statewide initiative supporters, could land the robed ones in the unemployment line.