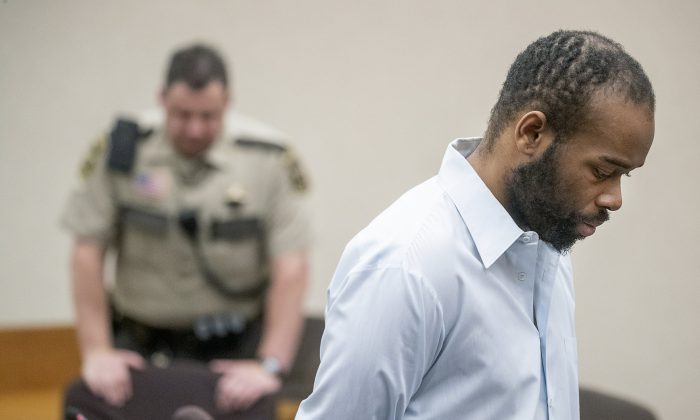 Emmanuel Aranda, who threw a 5-year-old boy over a Mall of America balcony, listens as Judge Jeannice Reding hands out a 19-year sentence at the Hennepin County Government Center in Minneapolis, Minn., on June 3, 2019. (Elizabeth Flores/Star Tribune via AP)
US News

Parents of Boy Thrown at Mall of America to Suspect: ‘You Chose to Listen to the Worst Parts of Yourself’

The mother and father of a 5-year-old boy who was thrown from the balcony at Minnesota’s Mall of America released a statement to the suspect, Emmanuel Aranda.

On June 3, Aranda was sentenced to 19 years in prison for attempted murder. Investigators said that in the attack, Aranda went to the mall looking for someone to kill before he grabbed the boy, Landen, who was with his mother and friends.

The boy fell about 40 feet to the floor and survived. He is still in the hospital recovering, said his family, adding that he has a long road ahead of him.

His mother’s letter was read aloud in court during the suspect’s sentencing.

“You intended to harm him, but God intended it for good! To accomplish what is now being done, the saving of many lives,” she wrote. “You chose to think about yourself that day, what you were feeling and wanted to do to someone else. I’m sad you chose anger and hatred. Something really bad must have happened to you for you to want to do this to a sweet, innocent little boy. I’m sorry for whatever you’ve gone through. I hope God can save you and show you what His love is all about someday,” according to Fox9

Aranda, she claimed, “chose to listen to the Devil” on the day of the attack.

Read More
Restaurant Praised After Showing ‘Uncommon Kindness’ to Boy With Autism
11-Year-Old Boy Eats 5 Meals a Day to Save His Father’s Life
6-Year-Old Boy Found 20 Hours After Going Missing; Rescuers See Dog Lying at His Side
Video: 6-Year-Old Boy Sees His Mother’s Face Light up for the First Time
Video of Father Comforting Baby Boy as He Gets Shots Goes Viral

“Your act was evil and selfish, you chose to listen to the worst parts of yourself that day. You chose evil over good and chose to take your hate and hurt out on my precious boy. That is where your impact on us stops, you will take nothing more from us. We will continue to Love and serve our God, we will continue to love people and have joy and peace in our lives, you will not define our lives or our hearts,” he wrote to Aranda.

He added: “We will live our lives to the fullest filled with fun and joy. You chose to waste your life and I wish you could experience the pain and suffering you inflicted on my boy, you should have the maximum punishment that this life has for you so you understand the impact of your actions.”

A GoFundMe was set up for the family in the wake of the attack. More than $1 million was raised.

An update was posted on June 3, saying, “Thank you doesn’t even begin to describe the gratitude for all of the prayers and support still coming in. We are all so appreciative!”

The person behind the fundraiser stated that “Landen is still in good spirits and is still continuing on his road to recovery, a lot of small steps on his road back home. Our family is anxiously awaiting the time when he gets to go back to a living a normal childhood.”