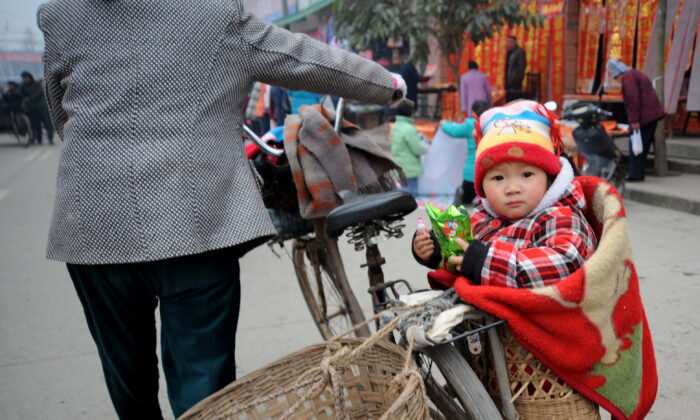 A baby sits in a basket on his way home after shopping for spring festival couplets in Chengdu of Sichuan Province, China, on Jan. 16, 2009. (China Photos/Getty Images)
Social Issues

A civilian exposed China’s black market involving the trafficking and selling of newborn babies under the guise of adoption after a year-long voluntary undercover investigation.

According to The Paper, a Chinese state-owned digital newspaper, a civilian played a critical role in the anti-trafficking effort. The civilian, Zhengyi Shangguan, joined a baby trafficking WeChat group disguised as a barren woman who desired a daughter. After prolonged undercover work, Shangguan gradually gained the trust of the middleman and was later considered to be a suitable buyer.

There were about 100 members in the WeChat group, consisting of people from various cities and provinces in China. Due to WeChat’s sensitive vocabulary recognition, the group often disbands and reassembles itself. New members must clearly state their needs or be removed from the chat group.

Shangguan was able to identify the encrypted terms used by the group to avoid vocabulary detection. For example, the slang “bao” represents “baby.” The English letter “S” represents “sending for adoption,” and “L” represents “acceptance of adoption.” The two English letters corresponded to selling and buying.

On June 11, Shangguan received an encrypted message on WeChat suggesting that a baby girl would be available, followed by a phone conversation. The party that reached out to Shangguan was Ms. Zhu, one of the alleged orchestrators.

Zhu said the baby girl was expected to be delivered around July 20 at a hospital, and the price would be $17,000. She then guaranteed the baby’s health with a clean genetic history and offered to be there for the entire delivery process. To further dispel buyer worries, Zhu also suggested that payment could be made on the delivery day, but only cash would be accepted.

After thorough communications, Shangguan learned the entire delivery process and transaction details: A pregnant woman is usually admitted to the hospital’s delivery room in the morning. For the next three days, the newborn will be looked after by the nurses and screened for diseases and defects. After the examinations are completed, the baby is ready to be discharged. Upon discharge, the nurses will hand the baby directly to Zhu. After collecting payment, Zhu then passes the baby to the buyer along with a “consent to adoption letter” signed by the birth mother—then the transaction is complete.

Zhu appeared to be detail-oriented in her operations and even provided the buyer tips in advance. She suggested that it’s best to pretend to be pregnant months before the transaction occurs. Otherwise, friends and neighbors might question when a child suddenly appears. “It may cast a shadow in the child’s future” if not done properly, Zhu said, according to Beijing-backed media ifeng.

To ensure smooth operations, Zhu claimed that she had connections in the local hospitals and that doctors and nurses generally turned a blind eye. “You have to spend what you have to spend to make things work,” Zhu added, and suggested that there are other staff that are part of the operation.

Zhu claimed to have graduated with a master’s degree and was formally a teacher. After remarrying, she was unable to conceive and started her 10-year-journey to have a child and accidentally entered the business of trafficking. The middleman in the WeChat group once helped her get a surrogate, and the two became partners.