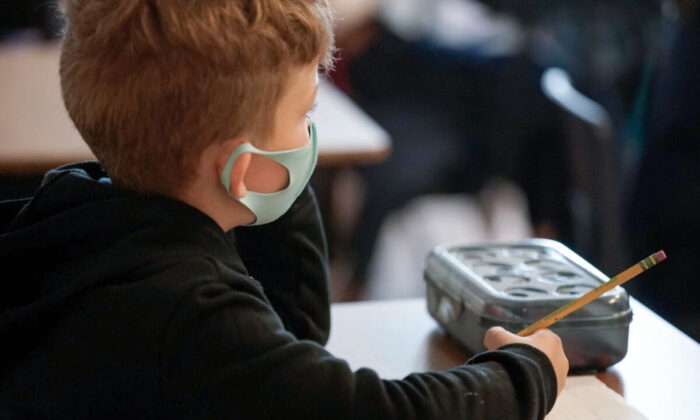 A masked-up student attending class at a U.S. school on Sept. 10, 2020. (George Frey/AFP via Getty Images)
US News

A group of parents sued the state of Minnesota asking a judge to order Gov. Tim Walz (D) to impose a statewide school mask mandate.

The group filed the complaint (pdf) in Ramsey County District Court on Friday. The parents want Walz to declare a state of emergency and use the authority to impose a mask mandate on public schools statewide, the Pioneer Press reported.

“This action is brought to protect the health, safety and lives of Minnesota students, school personnel, and others by requesting a court order directing Defendant Governor Walz to declare a peacetime emergency … and issue an executive order directing all school districts and schools in the state to impose and enforce a mask mandate to protect against the spread of COVID,” the complaint states.

The lawsuit argues that the state’s Constitution entitles students to a “right to an adequate education,” which is purportedly undermined by the lack of a statewide school mask mandate.

“This fundamental right to an adequate education requires at a minimum that Minnesota students be allowed to attend schools that provide a healthy and safe environment for them, educators, and staff and the public, including the students’ parents,” the lawsuit states. “Schools that do not impose mask mandates do not provide such a healthy and safe environment and thereby deprive students of their fundamental right to an adequate education.”

The complaint further argues that the lack of a mandate creates a “public and private nuisance” and accused Walz of breaching his fiduciary duty.

Walz used his emergency powers last year to impose a statewide mask mandate. He has not declared an emergency or imposed a mandate as the Delta variant of the CCP virus fueled a resurgence of COVID-19 beginning in July this year.

Minnesota health and education officials recommended in late July that all students, teachers, and staff wear masks in schools this fall, regardless of whether or not they are vaccinated against COVID-19. The state’s guidance followed that released days earlier by the Centers for Disease Control and Prevention.

“More and more evidence is mounting that the Delta variant is a very different and more challenging virus than the original strain,” Health Commissioner Jan Malcolm told reporters at the time.

The 139 hospitals which report child COVID-19 hospitalizations to the federal government said that a total of 16 children were hospitalized with the virus as of Saturday, according to data maintained by the COVKID project. That’s far below the peak of 43 hospitalizations reported in November last year.

Nearly 42 percent of U.S. states have school mask mandates in place, including populous New York and California, according to a tally maintained by Burbio. Every state with a mask mandate in place is led by a Democratic governor.

The national discussion over school mask mandates is split sharply among political lines, with Democrat voters and executives heavily favoring mask requirements. Republicans are pushing back against the mandates, including with outright bans on such measures enacted in nine Republican-led states.

In Missouri, the state’s attorney general sued to declare mask mandates unlawful, citing studies that show that masks impair learning, cause headaches, lead to lowered happiness, and hinder verbal and non-verbal communication, and other negative effects.