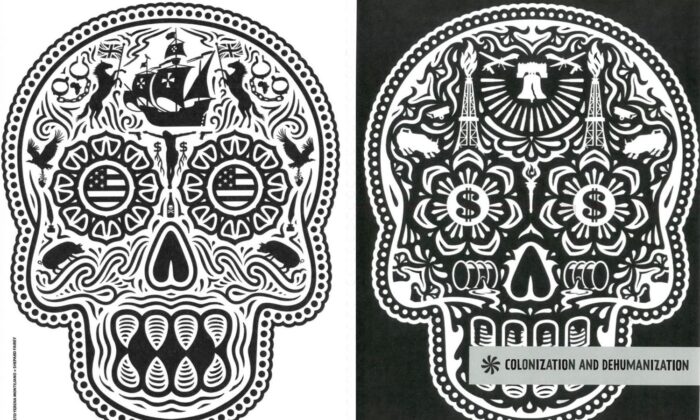 A mandatory ninth-grade ethnic studies curriculum at a school district in California’s Monterey County pushes dark and controversial political themes and imagery, says a critic of the program.

The Epoch Times obtained a copy of the curriculum from Schenkoske, who filed a California Public Records Act request through her attorney, Craig Alexander. It was verified as legitimate by Kali Fontanilla, a former SUHSD teacher.

Schenkoske said the teaching materials contain anti-Christianity ideology while promoting other spiritual traditions. She said the curriculum also focuses on “counter-hegemony,” a concept developed by Marxist philosophers to target dominant social structures, such as capitalism.

CRT concepts are also clearly included on pages 92 through 96 of the curriculum in excerpts from the article “Whose Culture Has Capital? A Critical Race Theory Discussion of Community Cultural Wealth” and page 97, featuring a diagram from “Examining Transformational Resistance Through a Critical Race and LatCrit Theory Framework: Chicana and Chicano Students in an Urban Context.”

“It’s absurd. This is propaganda schooling in every way, shape, and form,” Schenkoske said.

Schenkoske pointed out several examples of this dark imagery, including the work of Ernesto Yerena Montejano and Frank Shepard Fairey, a contemporary street artist, illustrator, activist, and founder of OBEY. Fairey is also known for creating the famous Barack Obama “HOPE” poster.

The first page “Unit 2 Readings” on “Colonization and Dehumanization” in the SUHSD Ethnic Studies curriculum contains an illustration of a communist raised fist, the socialist rose and an OBEY symbol.

An illustration of a skull with American flags for eyes on Page 136 depicts the crucifixion of Jesus with pistols near both hands of the Christ figure nailed to a cross and hovering above a bottle with a skull-and-crossbones. Under Christ’s arms are dollar signs with roots that drape down near his sides.

“This particular drawing is offensive because it shows the crucifixion of Christ, with guns on either sides of his hands pointed outward, as if Christ Himself were holding and aiming them,” Schenkoske said.

The imagery, she said, is “biased propaganda” that some children in the district are currently being forced to learn.

“This is like looking at a representation of a nation that they believe should be dead,” Schenkoske said.

On the next page, a similar skull has “$” signs in its eye cavities. It shows military drones by the Liberty Bell, surveillance cameras, bulls, spilled oil barrels, and burning oil wells with the heading “Colonization and Dehumanization.”

The image paints America and its flag in a negative light, Schenkoske said.

“This curriculum, and this image specifically, attacks capitalism,” she said.

On Page 46, the curriculum contains a chart from “Rethinking Ethnic Studies” that under “Religion” lists Christians as the “privileged/hegemonic” group responsible for “creedism, Islamophobia and anti-Semitism” forms of discrimination.

Under “Class” the chart calls for the “redistribution of wealth,” and a “shift in economic thinking.”

CFER and parents Eric Gonzales, Steve Houbeck, and Jose Velazquez filed a lawsuit on Sept. 3 against the state government and its agencies, including the State Board of Education and the State Department of Education. State Superintendent of Public Instruction Tony Thurmond was also named in the suit.

The co-plaintiffs allege that prayers to Aztec and Ashe gods in the state-approved Ethnic Studies Model Curriculum violate the California Constitution’s free exercise of religion and no government aid clauses.

The previous day, San Diego Superior Court Judge Eddie Sturgeon denied CFER’s petition for a temporary restraining order “partially because AB 101 had not been signed into law at that time,” Wu Wenyuan, CFER’S executive director, told The Epoch Times in an email on Nov. 10.

“Our lawyers sent the court and defendants additional documents proving our case. The State of California emailed them asking to be dropped from the case, because the State doesn’t think it has legal standing in the case,” Wu said.

“But we don’t plan to drop the State of California from the list of defendants.”

Schenkoske declared in writing to the court that she would testify as a witness about the content in SUHSD ethnic studies program, which documents the Aztec prayers.

Schenkoske states in the declaration that she learned through a public records act request that SUHSD’s ethnic studies curriculum has already incorporated the “In Lak Ech affirmation,” also known as the “Aztec prayers” that are being challenged in the lawsuit.

The California State Board of Education met on Nov. 3 and 4. The lawsuit was the first item on the agenda, but discussion on the issue was held in closed session.

At a recent SUSHD board meeting, Schenkoske criticized the district for allowing activism to seep into the classroom.

She told the board that the ethnic studies program teaches students about the Aztec god of human sacrifice. She later told The Epoch Times the lesson is on page 12 of local lesson plans and is included in the state curriculum.

The Aztecs believed Huitzilopochtli, the Aztec god of the sun and war, “fed on human blood and hearts,” so they held human sacrifice ceremonies at which they cut open the bodies of prisoners or slaves and offered the victims’ hearts and blood to Huitzilopochtli, according to Brittanica.

“And this a god you want to pray to? I mean, really?” said Fred McCuistion, another parent at the same meeting.

If someone were to suggest reciting the Lord’s Prayer after the Pledge of Allegiance in the morning, “people would be having a cow,” McCuistion said.

Schenkoske pointed out that amid the ongoing CRT debate, Aztec dancers showed up in the parking lot before one school board meeting, and they often perform dances at school events in the district.

Critics of the ethnic studies program claim it’s based on CRT and pushes neo-Marxist ideology.

CRT has gained traction among left-wing activists and academia, but opposition from conservatives, Christians, parents, and intellectuals reached a fever pitch over the summer and early fall. Opponents argue that teaching CRT in schools will further divide American communities along racial and political lines.

While Karl Marx focused on class struggles between the “bourgeois” and the “proletariat,” CRT focuses on the struggle between white “oppressors” and “oppressed” other races. It uses “privilege,” “intersectionality” and other terminology to describe these concepts.