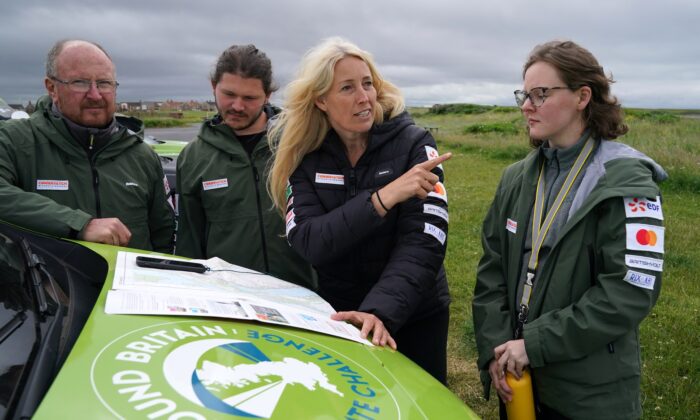 Paramotorist Sacha Dench (second right) chats with her team as they check the weather in Stevenston, Scotland, to see if the conditions are right for flight, in a file photo dated June 24, 2021. Dench was injured in an incident that killed her support paramotorist Dan Burton (far left) on Sept. 18, 2021. (Andrew Milligan/PA)
UK

Sacha Dench, who who was attempting a world-first circumnavigation of mainland Britain to raise awareness about climate change, has been seriously injured after a paramotor accident in the western Highlands of Scotland.

Dan Burton, a member of her support staff, was killed during the incident that happened late on Saturday afternoon.

Dench is currently in Aberdeen Royal Infirmary in a serious condition.

She had been dubbed the “human swan” as she attempted a 3,000-mile Round Britain Climate Challenge ahead of the Cop26 conference due to start on Oct. 31.

In statement, the trustees of the Conservation Without Borders, which was founded by Dench, said the accident happened near Loch Na Gainmhich in the far north of Scotland.

The statement said: “We are very sorry to have to confirm that Dan Burton, the support paramotorist has died as a result of the accident.

“Sacha Dench is seriously injured and is being treated in hospital. Her injuries are serious but not life-threatening.

“Both highly experienced paramotorists, our thoughts are with the family of Dan Burton to whom we offer our sincere condolences.

“The incident was attended by police and medics and enquiries are underway to establish the details of the accident.”

The statement added that the families of those involved had been informed and that the Round Britain Climate Challenge would now be put on hold.

Police Scotland said officers had been alerted at around 4:45 p.m. on Saturday.

The PA news agency understands that Dench had been flying earlier in the day with Burton, whose role includes documenting the climate challenge from the air, taking film and photographs.

Dench and Burton had landed before taking off again at around 3:30 p.m..

The ground crew, who communicate with the flyers and pick them up when they land, thereafter lost contact.

Dench had begun her climate challenge in June, taking off from Stevenston in North Ayrshire.

Over the following months, she had flown across the UK, most recently flying over the Kelpies in Falkirk on Sept. 3.