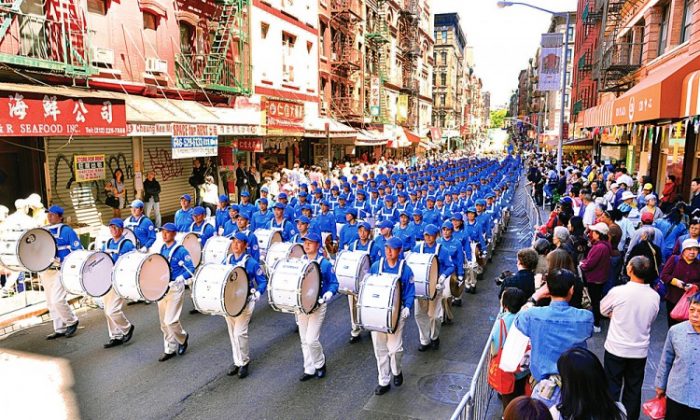 Qian Lin walks through Chinatown carrying a photo in memory of her husband who was persecuted to death in 2002. (Jeff Nenarella/The Epoch Times)
US

The drum major’s field of vision is vast. At the front of the parade, with an empty road ahead and spectators lining the sidewalks, he stands proud—the sway of his red tassel a beacon for the band members following.

“I feel the power of the percussion,” Kuo Ming Cheng said of the 85 drummers behind him. “I melt my spirit with their spirit, so we are together.”

Kuo, a native of Taiwan, led 6,000 practitioners of Falun Dafa through Chinatown in New York Saturday.

“I feel honored,” he said, “to be able to lead the grand parade today and show the beauty of Falun Dafa to the people of New York and the world.”

Kuo, a quiet man in his 40s, owns a company that provides learning assistance to students in his hometown of Gaoxiong. He started practicing Falun Dafa more than 10 years ago.

Falun Dafa practitioners do five meditative exercises, study the teachings of Falun Dafa—the main text is “Zhuan Falun,” and do their best to apply those teachings in everyday life. The basic principles are truthfulness, compassion, and tolerance.

He jumped at the chance to join the Tian Guo Marching Band in Taiwan six years ago when it was first formed.

“All practitioners in Taiwan wanted to join,” he said. “The music is very powerful. People can understand and feel the power very directly. Our mission is to go all around the world, especially Asia, to spread the goodness and beauty of Falun Dafa.”

The parade in Chinatown on Saturday also had a serious message, said Kuo. Falun Dafa has been persecuted in China for nearly 13 years, and practitioners spend much of their free time raising awareness of this human rights crisis.

Qian Lin couldn’t see Kuo from her place in the parade, and the two have never met. Lin’s purpose was somber, a sad reminder of a persecution that has affected all Chinese people.

One in 12 Chinese people practiced Falun Gong by 1999, when then-leader Jiang Zemin launched the persecution, out of an irrational fear of the sheer number of people practicing. The propaganda emanating from Beijing was so widespread and complete that it reached every household and workplace in China. Outside China, Chinese communities were fed the same erroneous information.

Lin was one of hundreds of women walking in the parade wearing white, holding photos of people who had been killed in the persecution. She held a wreath with a photo of her husband, Rao Zhuoyuan, on it. An arrangement of small orange flowers was placed around the frame. Rao was tortured and killed by the regime in 2002.

“After he was persecuted to death, I wanted to see his body one last time, but they asked me to pay 100,000 yuan (US$15,850) first,” she said. “I just feel the people who have been educated under the Chinese Communist Party do not have humanity anymore.”

Lin did not get to see him after he died. She arrived in the United States in 2007 “with the help of the U.S. government and the United Nations.”

“For cases like mine … there are tens of thousands of them in China. Yet most of them are not fortunate enough to be able to come to the United States. I came here wanting to expose this persecution.”

For two hours on Saturday, Lin was able to share a tiny portion of her story with the people of Chinatown, New York, through the somber memorial march.

“We hope people all over the world can join us to end the persecution and to raise their righteous voice,” said drum major Kuo.

“I feel very glad for the people watching. They have such a rare opportunity to see 6,000 people in a parade and see Falun Dafa. They are very lucky.”