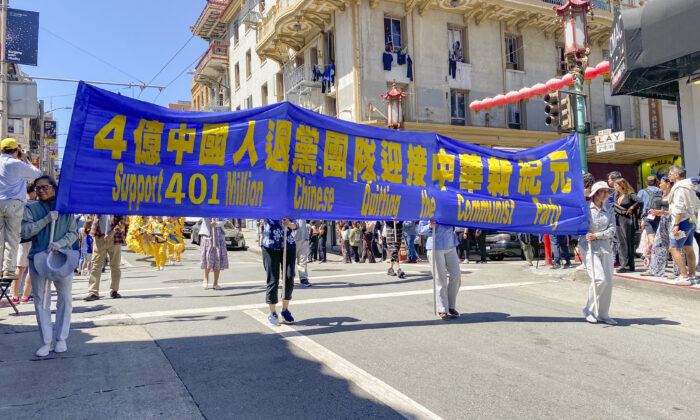 SAN FRANCISCO—Hundreds of Falun Gong practitioners from around the San Francisco Bay Area held a parade in San Francisco on Aug. 20 to celebrate the milestone of 400 million people quitting the Chinese Communist Party (CCP).

“That’s a big number,” Scott Shields, a Bay Area resident, told NTD, a sister media outlet of The Epoch Times. “I think that it should scale even higher. And I think with that kind of number, it can wake people up … to understand the importance of why [Chinese should quit] and why they should sign [a petition of support] as well.”

As of Aug. 3, more than 400 million Chinese people in mainland China and overseas have joined the movement to renounce their membership to the CCP or its affiliated organizations. That’s according to data compiled by the New York-based Global Tuidang Center, which focuses on encouraging people to renounce their oath to the Party. Many use aliases to protect themselves from reprisal.

“All Chinese people in China have to listen to what the Chinese Communist Party says and what they want us to think,” Jollia Xiong, volunteer coordinator for the San Francisco branch of Tuidang, told NTD. “When I was very little, we had to say, ‘Oh, we have to follow the Communist Party, to sacrifice our lives there.’”

Their purpose is to make public the CCP’s history of crimes against humanity so that more people will be aware.

“[The CCP] did so many evil things,” Xiong said. “The Cultural Revolution, you know, the student movement in Tiananmen Square—so many students [were] killed.”

On June 4, 1989, during a mass pro-democracy protest led by students, the communist regime rolled out tanks and deployed guns in the heart of Beijing, crushing people and objects in their way. It became known as the Tiananmen massacre.

“I was in China at the time, and I didn’t know [anything about the massacre],” Xiong said. “They said … no single student was killed. I believed, because all I could get was the state-run media—radio, television.”

She didn’t learn the truth about the deaths until she got to the United States.

Hong Zhang, a Falun Gong practitioner attending the parade, recalled her experiences working in a hospital after the Tiananmen massacre.

“I was part of the medical staff trying to rescue the students and citizens. Our hospital floors—it was like a river of blood—there was blood everywhere. We’ve never seen this before. It was like war,” Zhang told NTD.

Like Xiong, Zhang said she remembers the propaganda news on television reporting no deaths, while she witnessed one death after another. After that, she made up her mind to move to the United States for freedom.

For years, Zhang made calls to China, encouraging people to quit the CCP. One time, she called a dorm with six college students to expose the Communist Party and told them about the June 4 massacre.

“After they heard that, they were very shocked,” Zhang said. “After that, all six of them quit the CCP.”

Religious and ethnic groups are also persecuted in China. Since 1999, Falun Gong practitioners have been tortured, forced into labor camps, and even had their organs forcibly removed, with many dying on the operating table.

“We never thought that something like this is happening in the world,” said Victoria, from Austria. “[People should have] the freedom to meditate.”

Dylan Dawson, a San Francisco resident, told NTD: “I think the greatest support you can give someone is to listen, understand—much like we did today. We just came out for a stroll in the city where we live and witnessed a parade and wanted to know more about it.”

Shields said: “Truth, compassion, and forbearance [is] the exact opposite of lie, cheat, steal. The CCP does lie, cheat, and steal, as we know, in tech and in politics.”

The international community has been increasingly turning away from the CCP.

The CCP is blamed for mishandling and covering up the coronavirus leak from a top lab in the central Chinese city of Wuhan.

The Tuidang Center has organized a petition to support the “End the CCP” movement, collecting more than 2.5 million signatures to date.

Jason Blair contributed to this report.