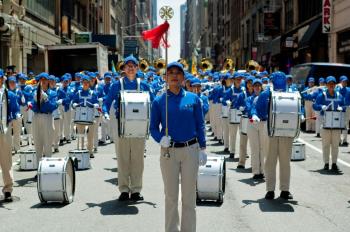 The Divine Land Marching Band, composed mostly of Falun Gong practitioners, warms up before a parade in Manhattan on June 6. (Joshua Philipp/The Epoch Times)
US

NEW YORK—Drums and flutes sounded as the band warmed up. Dressed in blue and white, the Divine Land Marching Band led more than 4,000 people in a parade in Manhattan on Saturday.

The participants came from more than 70 countries to call for an end to the persecution of Falun Gong in China.

“We came here to support human rights. We can’t just be silent,” said Miatra Miraftabi, a middle-aged woman who is visiting New York from Iran.

Falun Gong practitioners are thought to account for 66 percent of the torture victims in the prisons of the Chinese Communist Party (CCP), according to a 2007 report from the U.N. The U.S. Department of State also said in a 2007 annual report that foreign observers estimate Falun Gong practitioners constitute at least half of the known prisoners in the Chinese regime’s forced labor camps.

Other reports and witnesses have shown evidence that in addition to using torture and forced labor on Falun Gong practitioners, the CCP also uses them as living sources for organ transplants.

“This is the most brutal human rights abuse through history until now and it must end,” Mriaftabi said.

The parade gave a broad image of the practice, from its roots in ancient Chinese culture, to the meditation and values that it is based on.

Girls dressed in ancient Chinese dress danced with large flowers, hundreds of people demonstrated the slow movements of the Falun Gong exercises. Others held banners displaying the guiding principles of the practice—”Zhen, Shan, Ren,” which translates to truthfulness, compassion, tolerance.

Chu-Cheng Ming, a 56-year-old professor of political science at the National Taiwan University held a banner with the a large Chinese character on it.

“The practice is about being a better person, both morally and physically,” said Ming. “It is an overall improvement of yourself.”

“[After practicing] your mind is more free,” said Ming. “Nowadays I get whatever I get and I’m happy where I am. If I have it I’m fine and if I don’t have it I’m also fine.”

Falun Gong, also called Falun Dafa is the most popular meditation practice in China. There were an estimated 70 to 100 million people practicing Falun Gong inside China, within just seven years of it being made public.

A large section of the parade was dedicated to those who have lost their lives. Dressed in white, hundreds of people held pictures of family and friends who were killed by the CCP for practicing Falun Gong.

Vivian Duan, 30, was among the participants in that part of the parade. She held a picture of Wang Bin, a 47-year-old man who was killed by the CCP by having his organs removed for forced transplant.

“In China there are no human rights and there is no freedom of belief,” said Duan. “They kill these practitioners and steal their organs. It is more horrible than words can describe.”

“We are calling for help—bringing attention to what is going on in China,” she said.

Another part of the parade was dedicated to the “Tui Dang” or “quit the party” movement.

Tui Dang is a movement of Chinese withdrawing their membership from the Chinese Communist Party. It began as a peaceful approach to end the regime’s abuse of its people. Through Tui Dang, Chinese people have simply stated that they will not partake in its abuses and are withdrawing from the regime’s ruling structure.

“Going by its nature, we cannot expect that the CCP will stop the persecution by itself,” said Zheng Qu, a research scientist at CalTech who was marching in the parade. “For me, Tui Dang is the most peaceful way to stop the persecution and is an effective way to awaken the conscience of the Chinese people.”