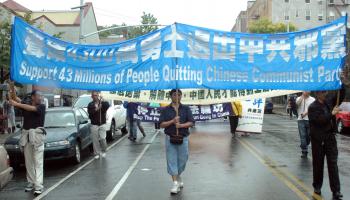 40 Million and Counting: Marchers in a Parade in Brooklyn Chinatown Sunday celebrate the resignation of more than 40 million people from the Chinese Communist Party. (Jonathan Weeks/The Epoch Times)
US

The group carried signs and banners honoring the more than 40 million Chinese who have publicly denounced the CCP and its affiliated organizations. Some of the signs also carried pleas to stop the CCP’s persecution of Falun Gong practitioners in Mainland China and throughout the world.

A Chinese drum section with a group of traditional dancers led the procession. Rain came down for the duration of the parade, but the group showed no signs of stopping due to weather.

Area residents peered through windows and came out on their porches to watch the parade go by. Participants of the demonstration set up a small stage at the end of the march for speeches.
Yanfeng Zhou, a member of the Chinese Democratic Party, requested in a press conference after the march that the United States government take steps to ensure that no CCP members be admitted into the U.S.

Groups of young people stopped and agreed with the parade’s message, denouncing the CCP.

“Everybody who has emigrated here from China was asked by the U.S. government if they were a communist,” said Zhou in his speech after the parade. “They had to answer ‘no’ to get in the country, then they come here to New York and act like communists.”

In 2004, The Epoch Times published an editorial series on the history and nature of the Chinese Communist Party, including its destruction of the traditional culture, its rule by terror, and its history of killing. The editorial series has spread widely in Chinese communities overseas, and clandestinely inside China.

It has spurred a movement whereby Chinese are renouncing the Communist Party. To date, more than 40 million Chinese have renounced the party on a special website set up by The Epoch Times and through local service centers. The majority of those have signed up from inside China, using software to get through the regime’s internet firewall.