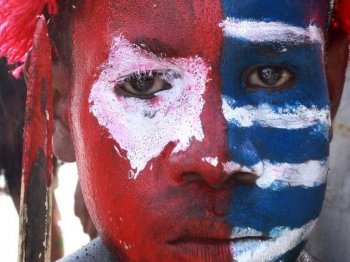 A Papuan tribesman's face is painted with the color of the banned separatist flag during a rally in Jayapura on July 8, urging the provincial Parliament to demand a referendum on self-determination.
World

Plight of the Papuans

James Burke
View profile
Follow
biggersmaller
Print
He had just had his abdomen carved by a bayonet, yet still managed to let out “Freedom! Papua… Freedom!”

The defiant act prompted the uniformed men who were videoing his final moments via a mobile phone to taunt him.

“How are you going to get freedom when you are like that?” said an officer of the Indonesian paramilitary police in the video recently released on the Internet. “You are never going to have your freedom, as long as there are still soldiers.”

A mixture of verbal abuse and political lecture followed as the police stood around the dying man who replied with, “God, the suffering of all the simple people. There are so many. They are crying.”

A police officer responded, “God isn’t going to answer your prayers. Papua is not going to be free until Jesus returns, I’ll tell you that.”

According to human rights news website HUB, which shows the 2009 video, Wayeni was accused of burning police vehicles and buildings. HUB also said that local nongovernment organization (NGO) sources stated that at the time of the video, the middle-aged Wayeni was no longer politically active.

Indonesian police told media that Wayeni was shot while resisting arrest and died on the way to a hospital.

A director general from Indonesia’s Ministry of Justice and Human Rights, Harkristuti Harkrisnowo, said earlier in the week that she was unaware of the video but would investigate, reported the Jakarta Post.

A low level insurgency by a small number of Papuans against Jakarta’s rule has been ongoing since the 1960s when Indonesia took control over what is the western half of New Guinea island. Prior to that it had been a Dutch colony. Papuans are Melanesians and they have nothing culturally in common with Indonesians who are being settled in Papua in large numbers.

Estimates of Papuans killed since Indonesian control are in the tens of thousands and Jakarta is restrictive of media, diplomats, and human rights organizations seeking to investigate claims of abuses.

Earlier this month, 50 members of the U.S. Congress sent a letter to President Barack Obama saying that there is strong indication that a slow-motion genocide has been taking place in Papua against the indigenous population.