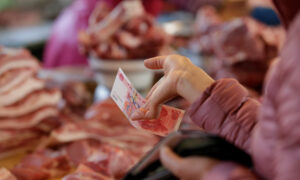 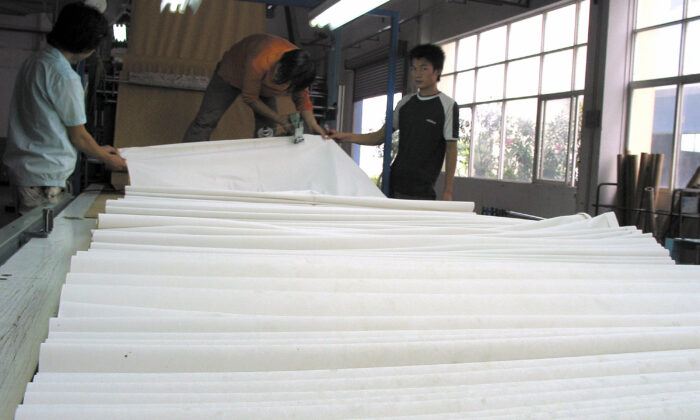 Shenzhen, China: Workers view the production of paper at a paper mill in the southern Chinese city of Shenzhen on 19 Oct. 2006. (Peter Harmsen/AFP via Getty Images)
China Business & Economy

Paper prices have taken a sharp rise in China recently, with some companies upping prices five times in a month. The soaring price has become a most searched topic on China’s Internet.

Major printing paper companies and traders issued a number of notices of price adjustments in May after the price of printing paper increased by approximately $31.34 per ton. The increase for white cardboard was even higher.

Nine Dragons Paper, a leader in the packaging paper industry, raised prices five times in May. The price adjustments became more frequent in the second half of the month, with increases on May 17, 19, and 24. More than 40 paper companies in Hebei, Henan, and Shandong provinces followed suit immediately.

The owner of a printing shop in Beijing told China Central Television that the original price of white cardboard was approximately $1,018 per ton, while the current price is $2,034 to $2,191 per ton. He said his profits dropped by 30 percent due to the price hike.

On April 1, the four major household paper companies in China, Gold Hongye Paper, Hengan International, Vinda International, and C&S Paper, all raised their prices, with some products increasing by 10 percent to 20 percent.

The paper product makers attribute their price adjustment to the continually rising cost of raw materials. The price of wood pulp started going up in the second half of last year, and the cost increase this year is even more dramatic. Paper companies have adjusted their prices accordingly.

Zhang Shenjin, secretary-general of the China Paper and Pulp Industry Chamber of Commerce (CPICC), told Chinese media that the main reason for paper price increase is the global increase in pulp prices, logistics, and energy. These increases in the upstream of paper making led to increased production costs for paper companies.

There are two major types of paper makers, one uses wood pulp as raw material and the other uses recycled paper. For a long time, China has relied on imports of wood pulp, which is derived from wood chips.

According to Chinese state media, China has ranked as the number one importer of wood pulp in the world since 2003, and its demand has been growing. In 2020, the country’s wood pulp imports reached 30.64 million tons, accounting for 72.8 percent of its total wood pulp consumption.

The price of wood pulp rose from July last year to March this year, with an average increase of more than $400 per ton.

When using recycled paper to make paper, waste paper is processed into paper pulp before being fed into the paper-making machine.

In December last year, Chinese authorities issued a sweeping ban on imports of solid waste, including waste paper, beginning on Jan. 1, 2021. Hence, paper companies could no longer import waste paper, and the price of domestic waste paper went up immediately.

Not all paper companies feel confident that they can achieve their sales goals if they continue to increase prices of their final products. A number of factories halted production in the past three months amid the soaring prices of raw materials.

On March 31, Sun Paper Group of Shandong Province announced that it would optimize its industrial paper and art paper machines in April.

On April 26, Huatai Paper Company Limited, another paper maker in Shandong Province, issued a notice that it planned to suspend production in order to conduct maintenance of the copper paper machine in early May.

Similarly on April 27, Chenming Paper announced that it had decided to shut down the printing paper machine for 10 days for inspection and maintenance.

Zhang Shenjin explained that the reason for these production suspensions was the increased cost of wood pulp and paper pulp making it impossible for the paper makers to make a profit.

Senrex Paper is a carton box producer in Guangdong Province. Manager Wang Xiaoya told Chinese media that if the company were to maintain its original prices, the cost of raw materials would account for more than 75 percent of overall operating costs.

Although major carton box factories increased their prices by an average of 15 percent, their profits remain scant.

The increase in carton box prices has a great impact on downstream manufacturing industries, such as small household appliances and furniture. A manager at a furniture company in Guangdong told Chinese media: “The price of cartons has increased by at least 30 percent this year. We have to deal with a much higher operating cost as a result.”

He added that he had to raise the prices of end products, even for customers who made previous inquiries.

“They will have to pay the new price,” he said. “We may lose some customers, but we have no other choice.”