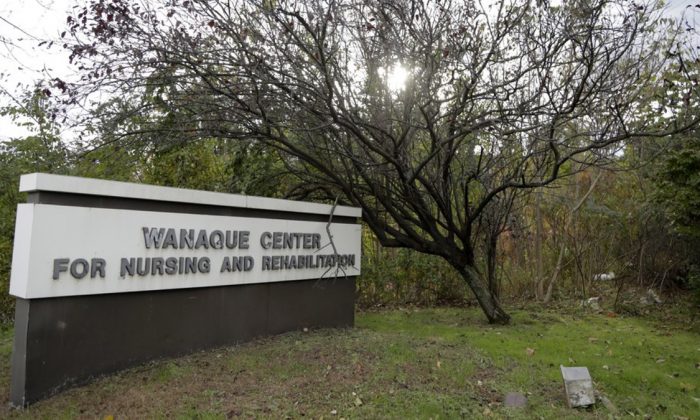 The Wanaque Center For Nursing And Rehabilitation in Haskell, N.J., on Oct. 23, 2018. (Julio Cortez/AP Photo)
US News

The North Jersey Record reports that the penalty stems from state and federal inspections at the Wanaque Center for Nursing and Rehabilitation during last fall’s outbreak.

The inspections cited conditions posing “immediate jeopardy” to children dependent on ventilators and other pediatric and elderly residents. A letter from Lauren Reinertsen of the Centers for Medicare & Medicaid Services said the convictions existed from Oct. 9 to Nov. 16. Officials said the center is now in compliance, although it can’t admit pediatric ventilator patients pending state approval of an infection-control plan.

The center strongly disputes a federal report on the outbreak and is appealing.

Company Leaders Are Faulted in Outbreak That Killed 11 Kids

A federal report says the viral outbreak was made worse because those in charge didn’t plan for such an outbreak and didn’t react fast enough.

The Record reports the pediatric medical director of the Wanaque Center for Nursing and Rehabilitation didn’t know how many children were infected with adenovirus or what his job entailed at the time of the outbreak last fall.

The deficiencies in leadership “contributed to the delay in identification and containment of (the) adenovirus outbreak, affecting 33 residents (and) one staff, and resulted in 11 pediatric resident deaths,” the report said.

Posted by The Wanaque Center for Nursing and Rehabilitation on Thursday, 3 September 2015

Center Administrator Rowena Bautista says the report by regional offices of the Centers for Medicare and Medicaid Services is “riddled with factual inaccuracies and blatant misstatements.” She says the center has appealed the findings and will “vigorously dispute” the allegations.

“We are infuriated that, after a cursory review, federal surveyors put together a report riddled with factual inaccuracies, disregard of medical judgment, and blatant misstatements about how viruses spread,” she said in a statement.

A disturbing federal report describes the pediatric medical director of the Wanaque Center for Nursing and Rehabilitation as so disengaged that he didn’t know how many children were infected, or what exactly his job entailed. @LindyWa reports. https://t.co/w7npiu2HGI

The 114-page report was written on Nov. 17, 2018. The inspectors visited the Wanaque center during the peak of the outbreak on Nov. 13 through 17. The center has 92 beds for children and 135 for elderly residents.

No new cases of the virus have been reported at the center since Nov. 12. But the state still bars new admissions to its pediatric ventilator unit.

Adenovirus usually poses little risk for healthy people. It can cause mild cold or flu symptoms, and some strains also cause diarrhea and pinkeye.

The strain found in the Wanaque rehab center outbreak is called type 7 and is among the more potent types. It sometimes causes more serious respiratory illness, especially among those with weak immune systems.