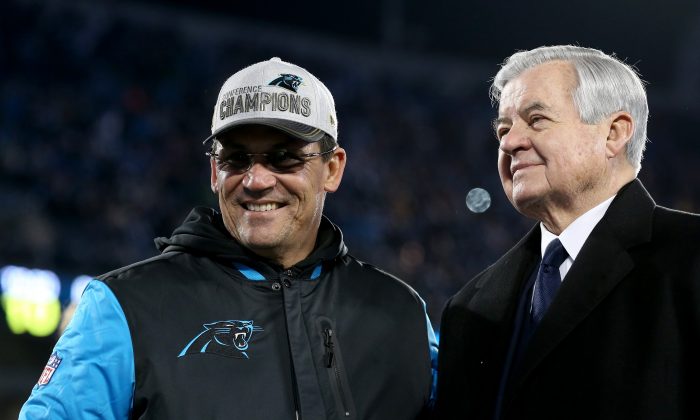 Panthers owner Jerry Richardson is going all out this year and is generously taking every team employee (even the interns) to the Feb. 7 Super Bowl in Santa Clara, California:

Richardson did the same thing a dozen years ago when Carolina lost 32–29 to New England in Super Bowl XXXVIII—the franchise’s only other Super Bowl appearance—according to a report in the Charlotte Observer.

“Mr. Richardson understands that this memorable season would not have been possible without harmony and a complete team effort,” team president Danny Morrison said in a statement to the Observer. “This is not unprecedented as he also provided an opportunity for the Panthers staff to travel to the 2004 Super Bowl in Houston, Texas. It’s an incredibly gracious gift.”

Although it’s unclear if Richardson, a former player in the NFL, will be paying for hotels and any other expenses, the move is extremely generous, but not completely unprecedented (aside from him doing it 12 years ago).

Last summer, Golden State Warriors owner Joe Lacob made a similar gesture for all full-time employees, taking them on a ride in a chartered jet to Cleveland to see Game 3 of the NBA Finals—a game they lost 96–91, though they still wound up winning the series in six games.

Naturally, there are storylines on both sides. A win by Carolina would be the franchise’s first ever Super Bowl title and they would be the first one-loss team since the ’85 Chicago Bears to win the big one.

On the other side, there’s Peyton Manning. The only NFL player to win more than three MVPs (he has five) has just one Super Bowl title and plenty of heartache to show for his previous 14 trips to the NFL playoffs. This time may be his last and a Super Bowl win seems like the fitting ending for one the best to ever play the game. He’ll likely have to lean on Denver’s top-ranked defense to hold Cam Newton and company in check though.