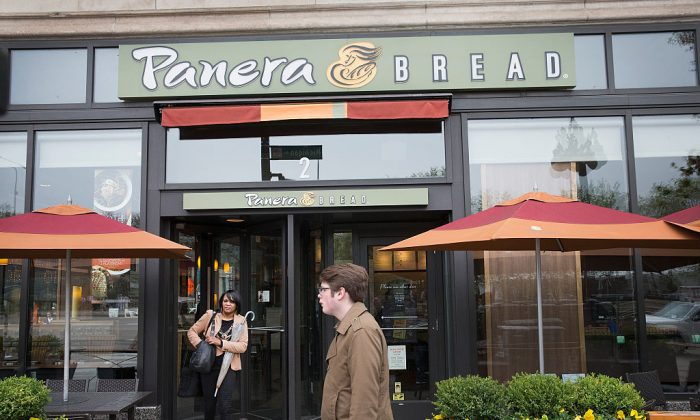 A sign marks the location of a Panera Bread restaurant on May 5, 2015 in Chicago, Illinois. The company said today it has eliminated or intends to eliminate by the end of 2016 a list of more than 150 artificial colors, flavors, sweeteners and preservatives from food served in its U.S. restaurants. (Photo by Scott Olson/Getty Images)
US News

Panera Bread Fires Cashier Over What He Wrote on Receipt

A Georgia woman was so upset over what she saw on her receipt at a Panera Bread restaurant that she won’t be coming back again.

The woman went to a Panera Bread in North Druid Hills before picking up her son. She ordered a salad and asked to substitute strawberries for watermelon, WSB-TV 2 reported.

After getting her salad and sitting down, she couldn’t believe her eyes.

“I was floored. What are your morals? What does Panera Bread stand for?” she asked.

She saw the following message on her receipt:

“ADD WATERMELON FOR THIS STUPID [EXPLETIVE].”

The woman was so upset that she dropped her fork, didn’t take another bite, and went straight to the manager.

The manager told her that he would speak to the employee and asked if she would like her salad remade. Unsatisfied with the response, she left the restaurant and called Panera Bread’s corporate office, but that didn’t help either.

“The response that I got from them just didn’t feel like they felt like it was a big deal,” she said. “Across the board it was unacceptable.”

So to vent her frustration, the woman posted the receipt on Facebook, detailing her ordeal. The post got a lot of attention and a local TV station picked up the story. After that, Panera Bread finally issued a response, saying that they had fired the employee.

“At Panera, we have a zero tolerance policy for this kind of behavior and the associate has been terminated as a result of this situation,” a representative for the company said.

“We are focused on fostering a warm and welcoming environment for everyone, and this incident is not indicative of the way that we treat our guests,” the representative added.

The woman is now satisfied with the company’s response, but wishes that it was handled properly to begin with.

“I feel like if I did not use social media as my platform, I truly don’t feel like would have [gotten a response],” the woman said.

The woman was a regular visitor at Panera Bread before the incident, stopping by at least once a week to relax there. She said that she won’t be coming back anymore.