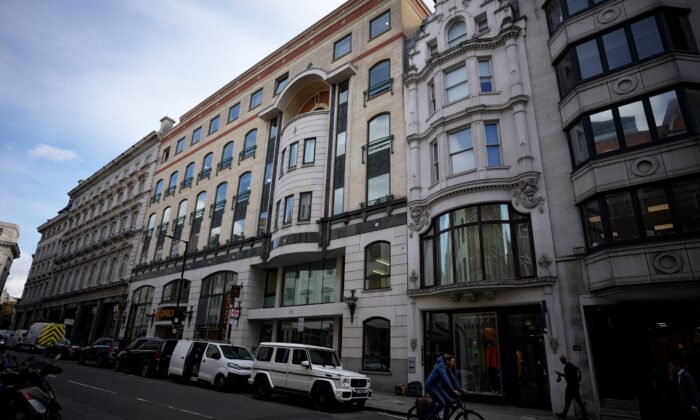 An exterior view of 56-60 Conduit Street, the property is linked to Azerbaijani President Ilham Aliyev in a new report dubbed the Pandora Papers, is shown in the Mayfair district of London, on Oct. 4, 2021. (Matt Dunham/AP Photo)
World

LONDON—Transparency advocates are calling on Britain to tighten the country’s defenses against money laundering and tax avoidance after a massive leak of financial data showed how London is a key destination of choice for some of the world’s richest and most powerful people to conceal their cash.

The cache of almost 12 million files shows how wealthy people around the world reportedly set up offshore companies to buy the property and avoid taxes.

Foreign individuals identified as beneficiaries of these types of offshore accounts in London include Jordanian King Abdullah II, Azerbaijan’s President Ilham Aliyev, and associates of Pakistani Prime Minister Imran Khan. Abdullah has denied any impropriety and Khan tweeted that his government would investigate anyone mentioned and take appropriate action if wrongdoing is found. Aliyev hasn’t commented.

The leaked financial data, dubbed the “Pandora Papers,” was published Sunday by the International Consortium of Investigative Journalists and its media partners, including Britain’s Guardian newspaper and the BBC.

Though the purchases are legal under British law, they highlight the complicated—and often anonymous—financial practices wealthy individuals use to avoid tax, far removed from the everyday experience of most of the British population.

London is a go-to for the rich and powerful because it’s home to a sophisticated ecosystem of businesses that can help in the process, including creative wealth management firms, high-end lawyers, and long-established accounting firms.

A 2019 analysis by transparency group Global Witness indicated that around 87,000 properties in England and Wales were owned by anonymous companies registered in tax havens.

It said that 40 percent of the anonymously owned properties identified were in London and that the total value of the properties was likely to be more than 100 billion pounds ($135 billion). Popular areas were said to include the boroughs of Westminster, where the U.K. Parliament is located, Camden, and Kensington, and Chelsea.

The London property market has for years struggled to shake off a reputation for playing a central role in how rich people around the world seek to hide and accentuate their wealth, with many prime properties in the heart of the city owned by non-nationals. Russian oligarchs have been high-profile purchasers of London properties in recent years, for example.

For decades, authorities in the U.K. have pushed a light-touch approach to regulation in order to attract foreign capital and talent. Critics say that has been a magnet for tax avoidance, which can be legal, as well as more criminal activities, including money laundering.

Duncan Hames, policy director at the campaign group Transparency International U.K., said the disclosures should act as a “wake-up call” for the government to deliver on long-overdue measures to strengthen Britain’s defenses against what he termed “dirty money.”

“These leaks show that there is one system for corrupt elites who can buy access to the prime property and enjoy luxury lifestyles and another for honest hard-working people,” he said. “Once again Britain’s role as an enabler of global corruption and money laundering have been exposed with the same loopholes exploited to funnel suspect wealth into the country.”

Transparency International U.K. is urging the government to close a loophole that allows companies in the U.K.’s offshore financial centers such as the British Virgin Islands and the Cayman Islands to hold property in the country without requiring these companies to reveal the names of their true owners.

It also wants the government to crack down on professionals that help those with illicit wealth move and hide their cash in the U.K. and to properly resource the National Crime Agency to go after those suspected of having made their money through crime and corruption.

“I don’t think it is a source of shame because actually our track record on this issue is very strong,” Sunak told BBC radio.

He pointed to measures taken over the past decade by the Conservative government to improve transparency—who owns what—and exchange data between tax authorities.

“As you’ve seen from the papers, it is a global problem, there’s a global dimension to it and we need other countries to co-operate with us to tackle this, but we are determined to do that,” he added.

Sunak also said there is “always more we can do” when he was asked about reports that half of all Russian money laundering is estimated to occur in the U.K.

Opposition parties said the revelations, which also raised questions over donations given to the Conservative Party, needed to be acted on urgently by the U.K.’s Conservative government.

“The tentacles of dark money exposed by the #PandoraPapers reach into the heart of U.K. democracy,” Labour Party foreign affairs spokesperson Lisa Nandy said in a tweet.