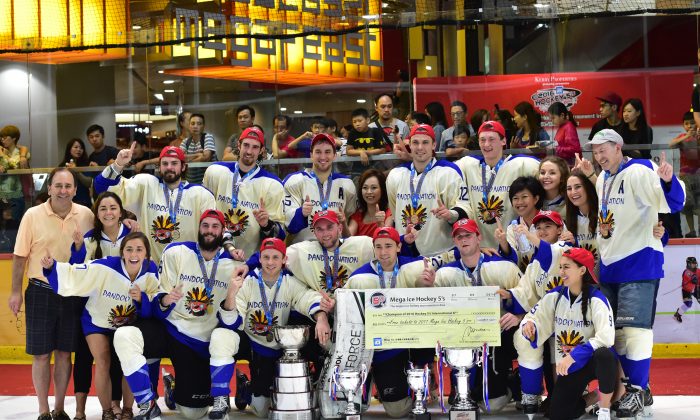 Nation celebrate their victory in the in the International division of the 2016 Mega Ice Hockey 5s, at Mega Ice on Saturday May 7, 2016, together with Ms Czarina Man, Director of MegaBox and a few of their special friends. (Bill Cox/Epoch Times)
HK Ice Hockey

Hong Kong teams lost in the finals of the two top divisions of the Hockey 5s at Mega Ice on Saturday May 7.

In the International Championship match Pandoo Nation the well-known multi-national Singapore based team, also winners of the top division in 2015, kept the Hong Kong Tigers team at bay for the three, 13 minute sessions of play.

Pandoo Nation came out strongly from the whistle, with wave after wave of attacks in furious style. After several surging runs Pandoo Nation scored through their star striker Montgomery in the 7th minute of the match. The Tigers battled hard to get on level terms but each attack was denied by good defence and impressive goal keeping. Pando Nation notched a second goal later in the game to record a 2-0 win.

In the Asia A Championship final there was a furious battle between Hong Kong Hitmen and Kung POW Kings with goals and goalies under pressure at both ends of the ice. It was level pegging right through the game with scores to the opposing teams. At 4-4 in the 3rd session the Hitmen broke the deadlock going ahead 5-4, they pushed on again to what they must have thought was a winning 6-4 score. But in the last 2 minutes of the match Kung POW Kings scored twice to push the game into extra time, much to the excitement of the spectator gallery. Kung POW Kings had the momentum and soon scored the winner making the final score 7-6.

Several of the Hong Kong players played in both the Asia A and International finals, so had consecutive matches involving over 2 hours of play, which must have been very energy sapping, particularly as the first match (Asia A final) was played at a very fast pace with very intense competition, going through to extra time. This may well have taken some of the edge off their abilities in the International final.