Pandemic Should Be Wake-Up for Ottawa Call to ‘Dangers’ of Chinese Regime: Expert 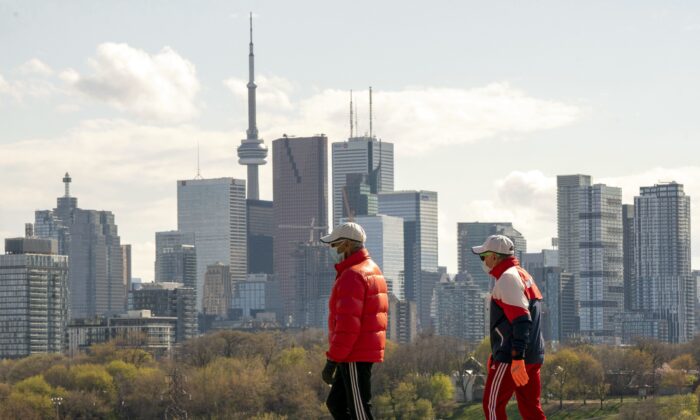 Men wearing masks to protect against COVID-19 take a walk in Toronto on May 7, 2020. (The Canadian Press/Frank Gunn)
By Shane Miller

As more damning information comes to light regarding Beijing’s handling of the COVID-19 outbreak, calls are increasing for countries impacted by the pandemic to hold the Chinese regime to account.

One expert says the crisis should be a wake-up call for the Canadian government as to the true nature of the Chinese Communist Party (CCP) and provides an ideal opportunity to start taking a hard line toward the regime.

“Based on their treatment of dissidents, their persecution of Uyghurs, or their continued detention of Canadians Michael Spavor and Michael Kovrig, our politicians should have long recognized the brutality of the Chinese Communist Party,” said Kaveh Shahrooz, a senior fellow with the Macdonald-Laurier Institute’s Centre for Advancing Canada’s Interests Abroad.

“But if they were willing to overlook those things, the COVID crisis will hopefully open the eyes of Canada’s lawmakers to the dangers of the CCP.

“We now have a choice to make: do we ignore the threat China poses and continue making nice with them in the hopes of winning trade deals? Or do we finally take a hard line, in concert with our democratic allies? I think the answer should certainly be the latter.”

Shahrooz says there are several things Canada needs to do to hold the regime to account, including applying sanctions under the Magnitsky Act to “Chinese officials responsible for human rights violations, corruption, and the coverup of the pandemic.”

“And we should demand a credible and independent international inquiry into China’s role in the pandemic. Yes, all of this will affect our trade relations. But if we move in lockstep with our democratic allies, we can withstand the pressures the CCP will try to exert on us.”

Though it’s now widely known that the CCP initially covered up the outbreak that went on to spread around the world, details continue to come to light about the extent of the regime’s bad-faith actions, the latest being a leaked Five Eyes intelligence network dossier obtained by the Daily Telegraph in Australia.

The 15-page research document outlines how the CCP suppressed or destroyed evidence of the virus’s spread in China. It summarizes how various researchers at the Wuhan Institute of Virology discovered novel coronavirus samples or were infected with the virus themselves and tried to sound the alarm, only to be pressured to stay quiet or, in more malevolent cases, have completely disappeared without any explanation.

In addition, it noted that Chinese authorities destroyed evidence of the virus in laboratories and refused to provide live samples to international scientists who were working on a vaccine, according to The Telegraph.

Although some intelligence experts have said it is unlikely the virus came from a lab, there’s still much uncertainty as to its origin, and Secretary of State Mike Pompeo continues to assert that there is “a significant amount of evidence” it originated from the Wuhan Institute of Virology.

The revelations in the Five Eyes dossier come amid signals of a brewing backlash toward China from the international community. As The New York Times reports, Beijing’s conduct has served to alienate it from several countries. Chinese ambassadors in African countries such as Nigeria and Kenya have been asked to address allegations of repressive treatment of Africans in China who became infected with COVID-19. The Australian government has called for an international inquiry into the virus’s origins in Wuhan. In Washington, President Donald Trump has entertained the idea of suing the Chinese regime for damages.

In a recent CBC News interview, former U.S. United Nations ambassador Samantha Power urged Canada to hold the regime to account for the sake of its strategic and moral interests. Ottawa has thus far been taciturn on what it thinks of Beijing’s culpability, or what its approach to China might be in the aftermath of the crisis.

“First and foremost, Canada should align with every other partner in the G7 and beyond on expressing profound disappointment with the Chinese Communist Party,” Shuvaloy Majumdar, a Munk senior fellow at the Macdonald Laurier Institute, said in an interview.

“Canada should also review a host of domestic positions, including suspending the Canada-China Legislative Association, recognizing the Canadian Mission in Taipei as ‘Canada House’ alongside a Taiwan relations act for Parliament, and revisiting ‘one country, two systems’ in light of how Beijing has been overtly subverting Hong Kong democracy.

“Beyond this, Canadian interests are best served by assuring stronger domestic production of goods and establishing more resilient supply chains abroad. This includes reviewing all Chinese investment to Canada under the Investment Canada Act, partnering with the United States, Japan, and Australia in the Blue Dot Network.”

The Epoch Times and other media have reported on how Canadian groups affiliated with the United Front—a department that works directly with the Central Committee of the CCP and operates as an aggressive instrument of soft power—helped stockpile significant amounts of personal protective equipment (PPE) to send back to the “motherland” to make up for an expected shortage there. The same approach was taken in other countries, creating a global shortage.

When Canada’s time of dire need for PPE came, the regime sent equipment, but much of it was faulty.

This served to demonstrate how inherently inextricable national security and supply chains are, which should be rectified going forward, says Sharooz.

“[We must] expand our definition of national security and ensure that supply chains that touch on this expanded definition are no longer at the mercy of the CCP.”

Both Shahrooz and Majumdar believe the government should consider sanctioning actors affiliated with the regime who have facilitated acts that jeopardize Canadian security.

“In defending the security of Canadians, the government should consider exploring criminal charges and levying sanctions against Chinese state-run companies who benefit from China’s ongoing information operations, cyber espionage, and foreign interference in Canada,” Majumdar says.

“A full assessment should be conducted ascertaining the activities of all Chinese diplomats in Canada. The government should also take proactive measures to ensure the security of Chinese Canadians from all elements foreign and domestic that aim to do them harm.”

Given that Beijing has significant clout within several international institutions, it’s questionable whether multilateralism can be effectively used to hold the CCP to account. Canada, Majumdar suggests, should establish a global contact group with those threatened by Chinese economic aggression in the developed and developing world.

“It is time to review China’s membership in the World Trade Organization,” he says.

From Canada’s pending decision on Huawei’s participation in the 5G rollout and the future of trade relations with China to its involvement in international organizations, many China analysts say the pandemic should be the impetus for long-needed changes in Ottawa’s approach to foreign policy. And how it decides to deal with Beijing in the aftermath will indicate the government’s willingness to accept and adapt to global realities as it tries to define Canada’s role in the world.

“It would be useful for Canadian policymakers to prioritize the independent interests of Canadians to shape the international order rather than be governed by international priorities imposed on Canadians,” Majumdar says.

“The fact is that millions of Canadians are imprisoned in their homes, that our national health-care system risks being overrun exposing both frontline workers and vulnerable patients to [infection], and that the national economy has come to a grinding halt. This isn’t occurring by accident—it is occurring because one state failed to uphold their obligations to the international system and betrayed the partnership they had promised.”