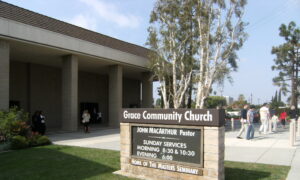 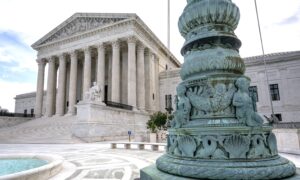 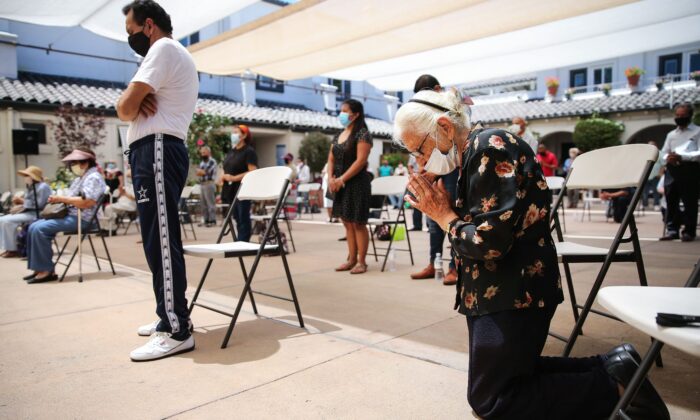 A worshipper kneels in prayer during Mass celebrated outdoors at the historic Our Lady Queen of Angels (La Placita) Church amid the COVID-19 pandemic in Los Angeles on Aug. 9, 2020. (Mario Tama/Getty Images)
US News

Constitutional tensions between the authority of governments to use coercive powers to protect public health and the right of Americans to freely engage in religious worship have come to the fore in recent months as the quarantines, curfews, and stay-at-home orders amid the CCP virus, which causes the disease COVID-19 have dragged on.

The Supreme Court has come under attack by churchgoers in recent months for holding in effect that there is a pandemic exception to the Constitution’s First Amendment religious protections. Many churches are now openly practicing civil disobedience just as religious activists seeking equal rights for blacks did during the Civil Rights era.

In May, in South Bay United Pentecostal Church v. Newsom, the high court unexpectedly denied a request from a California church that it be permitted to function under the same conditions as secular businesses. The vote was 5–4.

In July, the Supreme Court refused a request from a Nevada church that it be allowed to carry on under the same conditions as secular businesses. This prompted a particularly sharp dissent from Justice Neil Gorsuch in which he concluded: “The world we inhabit today, with a pandemic upon us, poses unusual challenges. But there is no world in which the Constitution permits Nevada to favor Caesars Palace over Calvary Chapel.” The vote in Calvary Chapel Dayton Valley v. Sisolak was 5–4.

Some critics, such as Dr. Steven J. Allen, distinguished senior fellow at the Capital Research Center, worry that if governments can trample religious freedoms with relative impunity, what will be next? Will future presidents, governors, and mayors use the emergency powers the courts have allowed them to possess to impose sweeping restrictions on the use of carbon emissions to supposedly save the planet? Will officeholders issue dramatic fiats limiting gun ownership rights despite the Second Amendment?

Some Americans have been appalled at what they say are examples of government overreach that limit church activities in hopes of combating the virus. As religious people go about their daily lives, battles have been raging in courts about how far governments can go in their efforts to combat the virus.

Liberals have tended to support restrictions limiting church activities, particularly those regulating indoor services by banning them or imposing social-distancing requirements in the pews.

Conservatives, on the other hand, have tended to chafe at such restrictions on religious worship, arguing that they violate a fundamental constitutional right upon which the nation was founded.

Very few of the lawsuits aimed at churches during the pandemic have led to the striking down of state or local orders restricting church services.

Curt Levey, president of the Committee for Justice, told The Epoch Times in an interview that “the courts have so far been hesitant to overrule governments, but as time goes on the momentum will probably shift in the other direction.”

Right now, legally speaking, it is as if the United States is now in a wartime emergency, Levey said.

In 1918, while the war the United States joined the year before was still raging, Americans were being arrested for protesting and campaigning against the war. At that time, “most of the free speech challenges lost, but as you got into 1919 and 1920, and some of those cases went to the Supreme Court, they started winning. I think we’re in that 1918 phase right now.”

Allen told The Epoch Times that from a conservative perspective, “what’s happening is the other side has been winning.”

Americans were shocked into compliance when the virus containment measures were first instituted, he said.

But now “the people on our side are educating ourselves, and as we’ve learned more about the Wuhan coronavirus we know how much of what has been said about it has been nonsense.”

“In terms of the rights issue, I think we’ll find out which side is winning on Nov. 3, because the election to some degree will be a referendum on the way the politicians have handled this crisis. The media, obviously, and particularly social media, are actively censoring information, the facts about the Wuhan coronavirus.”

‘Not Based in Science’

Levey said Americans are wondering if they have given up too much in exchange for supposed public health protections.

While President Donald Trump “has tried to strike a good balance,” some government officials have gone overboard.

“Whether these pandemic policies have been an overreaction, whether we’ve given up too much including in terms of health,” are open questions right now, he said, adding that he recently read that a large number of cancer cases are expected because people haven’t been getting screened during the pandemic.

Robert Weissberg, a professor emeritus of political science at the University of Illinois at Urbana-Champaign, told The Epoch Times he isn’t surprised that the churches have been losing in court.

“In the case of violating religious liberty, the justification must be iron clad, beyond doubt. Not just maybe, perhaps, and the like. National security provides the best examples since these restrictions often require a court order. The left has been waging war on religion for centuries, so what else is new?”

Attorney Paul Jonna, a member of the Thomas More Society legal team who has been successfully defending Grace Community Church in Los Angeles, which has been defying county rules about indoor church services, recently spoke to The Epoch Times.

“Judges are people like you and me, and they read the news and see the data,” Jonna said.

“At first, we didn’t know much about this virus. But as things progressed, and as the data set in, it has become increasingly clear that the restrictions on churches are not based in science. They are arbitrary and unjustified and reflect, at best, apathy toward religion or, at worst, disdain for it.

“Courts are starting to acknowledge that the burden on the government to justify these restrictions—at this stage in the pandemic—is much higher. This is especially true given how the government viewed certain ‘preferred’ First Amendment activity (like protests).”

In the church case he’s handling, it was on Aug. 14 that “the first judge in California agreed that there are constitutional problems with how they [i.e. governments] are treating churches.”

Cary Gordon, senior pastor at Cornerstone World Outreach in Sioux City, Iowa, told The Epoch Times he’s fed up with how both parties have handled the pandemic.

“One of the most fundamental laws of God states: ‘Remember the Sabbath day to keep it Holy,’” he said.

“Obedience to this command in a seven-day cycle must not be interfered with by civil authorities. Those in both political parties who have shouted ‘Separation of Church and State’ at me every time I exercised my First Amendment right to speak as a pastor into the political world for the last 25 years are now invited to live up to their perverted, progressive retooling of the phrase by separating themselves from my business in my church every Sunday morning.”