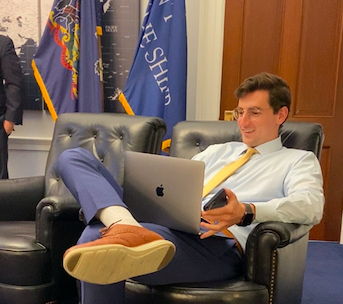 David Tennent, creator of the CNCT App for congressional aides. (Photo courtesy of CNCT).
US

Pandemic Left Capitol Hill Aides Isolated, so Former Intern Did Something About It

David Tennent was unfamiliar with the ins and outs of Congress when he left his hometown of Pittsburgh to start working on Capitol Hill in March 2019 as an intern in the office of a Republican House member, but he quickly proved to be a fast learner.

“I didn’t even know what ‘a coffee’ was until I moved to Washington, D.C., but then I went to a lot of those,” Tennent, 25, told The Epoch Times in a recent interview, describing the difficulties facing all newcomers to the Hill to meet colleagues and make new friends, even in the best of times.

Tennent did manage to meet people, but it wasn’t easy, because of the many factors that make working on the Hill a unique challenge: long hours, chronically low pay for all but the top positions, frequently high turnover, the steep cost of living in the nation’s capital, always laboring in the background, and much else.

But then in March 2020, two things happened: Tennent became digital director for Rep. Guy Reschenthaler (R-Pa.), and the isolation occasioned by the CCP virus-inspired pandemic that gripped America also turned Capitol Hill into a near ghost town, with the vast majority of staffers working from home.

Even today, two years later, the halls of the congressional office buildings—where most staffers labor—are nowhere near as crowded as they were routinely before the pandemic.

There are more than 12,000 mostly young men and women working on “the Hill” for individual senators and representatives and congressional committees. Given the nature of legislative campaigns and lawmaking, every such office tends to be its own little world.

Add the pandemic’s isolation, and it becomes doubly difficult for Hill newcomers and veterans alike to meet new friends, network in search of job opportunities, and know about potentially important political and social events.

“One of the main problems I found with the Hill is that everything is done through email, and there’s no way to track what you’re doing with government software. I had a notebook full of notes about coffees I went to, but it’s hard to keep track of everything with that,” Tennent said.

“That’s one of the things about the Hill, we’re very antiquated with a lot of the systems. We have all these LISTSERVS to communicate inside these email groups, which is great, but that’s not good for connecting with people, it’s not inter-personal. It’s one thing to have a legislative chat, but, if you want to set up a Happy Hour, the LISTSERV is not the place to do that.”

Not being one to sit back and do nothing about a problem he sees, Tennent said he couldn’t stop thinking that “there’s got to be a better way.” After a while, he seized on the idea of creating an app to help Hill staffers connect more easily and in a thoughtful way.

“That’s when the entrepreneurial spirit hit me,” Tennent told the Epoch Times. He became engrossed early in 2021 with translating the ideas and vision in his head to something concrete on a Hill aide’s cellphone, iPad, or laptop.

The result is CNCT, the Connect App, launching March 18 on the App Store and the internet near you.

“It’s a social and professional networking App focused around events, group messaging, and coffee meetups. It is strictly for Hill staffers, so you have to have a House.gov or Senate.gov email address to sign up,” Tennent said.

CNCT isn’t unlike Facebook or LinkedIn, but, Tennent said, he “wanted to take this on a different route and focus it on just networking, meeting people, connecting people, and at the same time taking it however you want.

“Whether you want to find new friends, or you want to find new business connections, a lot of times those go hand-in-hand. So I thought it was a good place to start,” he said. “The registration includes a few questions like what state you’re from, where you went to school, what neighborhood you live in right now, some interests that you want to pick up.”

CNCT users can either disclose or keep private who they work for, and the information about your political party is kept private. Users are also asked to indicate if they’re interested in new job opportunities, which involves a separate questionnaire that is also kept confidential.

Users can search based on selected factors, such as specific interests, schools attended, and neighborhoods, plus the app recommends potential matches for people with similar backgrounds and interests.

The app also enables meetings and other events to be scheduled and invitations sent, and provides a way to confidentially rate individual attendees.

Tennent’s app has attracted several hundred users in its Beta phase and he promises that people on the Hill will be seeing some innovative marketing approaches in the days ahead.

A 2018 University of Pittsburgh graduate with a bachelor’s degree in communication, Tennent’s first job out of school was doing marketing for The Laundry Chute, an internet startup that offers laundry services for college students. He left Reschenthaler’s staff two weeks ago to devote himself full-time to CNCT.

He has funded all of the development work on CNCT out of his own pocket, even though, unlike many on the Hill, he doesn’t come from an affluent background. He’s using savings from socializing that didn’t happen during the pandemic and profits from some deft investments.