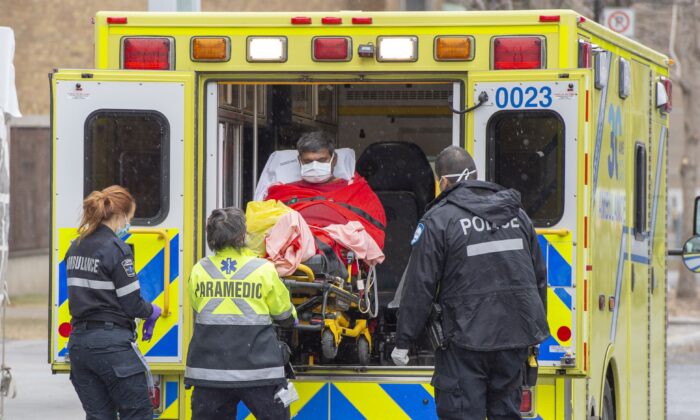 A patient is brought to the emergency department at a hospital in Montreal on April 9, 2020. (The Canadian Press/Ryan Remiorz)
Canada

The cancellation of medical procedures during the pandemic reveals inherent problems within the health-care system, prompting advocates to call for a greater role for the private sector or for the government to consider alternative models, while others remain sternly opposed.

As in earlier phases of the pandemic, thousands of surgeries were cancelled across Canada again in the summer of this year and in Alberta and Saskatchewan in recent weeks, as hospitals allocated more beds and personnel to intensive care units and emergency wards to handle COVID-19 cases.

Dr. Brian Day, founder and medical director of the Cambie Surgery Centre in Vancouver, said the problems would be less acute if Canadian health care was more efficient in the first place.

“To be fair, surgeries are being cancelled everywhere, but when we [rank low] in the world in the number of hospital beds per population, I think that’s a big part of the problem. The governments have neglected to build infrastructure in Canada,” Day said in an interview.

Day’s Cambie Surgery Centre issued a constitutional challenge against B.C.’s provincial ban on private health insurance. In September 2020, the B.C. Supreme Court sided with the government. However, the centre filed an appeal in June this year, which Day expects will soon get a positive response.

“There is only one country in which there are jurisdictions where private health insurance is unlawful in the whole world, and we’re living in it,” he said.

Day, a past president of the Canadian Medical Association, said private centres can offer surgeries evenings and weekends, unlike most public hospitals, and could more flexibly and affordably respond. Public or private, he said, surgical centres do things better.

Intervenors such as the BC Health Coalition and Canadian Doctors for Medicare (CDM) opposed Day’s court action and applauded his setback last September. BC Health Coalition co-chair Edith MacHattie and CDM chair Dr. Melanie Bechard co-authored an article in the Vancouver Sun in June to argue for more taxpayer funding to extend operating room hours, but not to facilitate more private options.

“Canadians do not want to sacrifice efficiency and equity for the sake of corporate profits,” they wrote. “We have had more than enough to worry about throughout the past 15 months. Let’s not add whether we can afford medical bills to that list.”

“Most developed nations are better equipped to respond to a pandemic for the simple reason that they have more resources in the system. Canada has fewer doctors and hospital beds and other assets in the health-care system per capita than many other developed nations, and that is because our system rations health-care resources to ultimately have politicians deciding how much money to spend,” Craig told The Epoch Times.

According to the Fraser Institute’s 2020 report comparing the performance of universal health care countries, out of 28 high-income Organisation for Economic Co-operation and Development (OECD) countries included for comparison, Canada ranks 26th in terms of physicians per capita, 17th in terms of nurses per capita, and 25th in terms of acute-care beds per capita.

The think tank also reported that in 2020, it took 10.5 weeks to get from a referral by a general practitioner to a consultation with a specialist, and another 12.1 weeks to get treatment. It estimated that, across the 10 provinces that year, people were waiting for treatment for a total of over 1.2 million procedures. Assuming that each person was waiting for only one procedure, that meant an estimated over 1.2 million Canadians were left waiting for treatment, or about 3.2 percent of Canada’s population.

In a press release announcing their report, the authors noted that even though the wait times in 2020 “have been undoubtedly influenced by the ongoing pandemic, historical data suggests they are also the result of decades of policy inertia.”

Craig said a public sector monopoly is bound to be inefficient, a situation made worse in health care since every patient treated drains a set budget. One way that could change, he says, is by implementing activity-based funding, in which hospitals are paid a predefined amount of money for each patient they care for, based on the patient’s particular condition.

“Someone needs to have an operation? Well, let’s do it, because then you get another chunk of money from the government and that totally changes the incentive model,” he explained.

“A lot of other countries have used activity-based funding for decades now, and what they’ve seen is that they can ultimately provide more output for patients. You have the incentive to spend less money on administrators … and are really focused in on providing services to patients, hip operations, cancer treatments, and so forth.”

According to a Fraser Institute report in May, nearly all of the world’s developed nations with universally accessible health-care systems have moved at least partially to the activity-based funding model. England, Germany, and Australia are enhancing their incentives to improve quality delivery within this model, while Canada, Iceland, Ireland, Luxembourg, and New Zealand remain outliers by relying on bulk budgets.

“There’s a lot of people suffering in this country with pain. There are people that are passing away. They’ve had to wait too long for heart procedures, cancer treatment, and other services from the health-care system. So ultimately, the status quo without reform is costing patients’ lives,” Craig said.