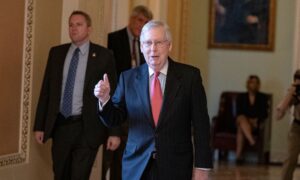 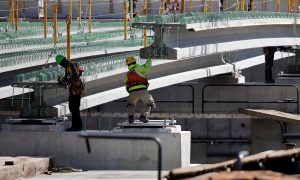 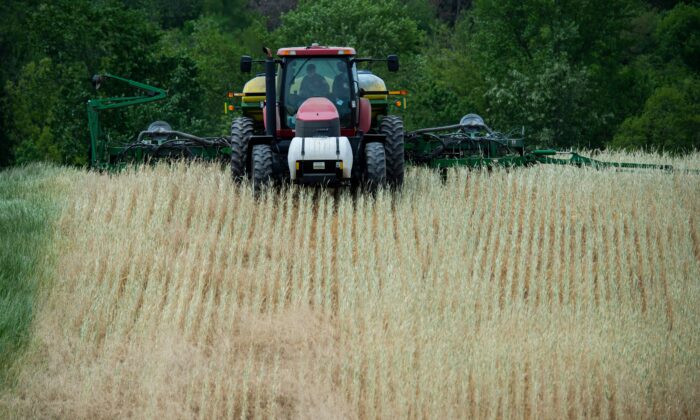 Farmer Dave Burrier plants corn in the Marvin Chapel field in Mount Airy, Maryland, on May 19, 2020. (ANDREW CABALLERO-REYNOLDS/AFP via Getty Images)
US News

WASHINGTON—Affordable and accessible broadband in the United States has become more essential than ever as the pandemic has moved many social and commercial activities online. However, there are many parts of the country where broadband is still unavailable.

During the health crisis, there were huge spikes in the use of broadband as many Americans worked from home and schools closed around the country.

Nearly 18 million Americans, mostly in rural areas, lack a reliable high-speed connection, according to the Federal Communications Commission (FCC), although the agency speculates the number could be much higher.

The agency’s latest broadband deployment report showed that the digital divide in the country has continued to narrow in recent years as more Americans gain access to high-speed broadband. This advancement was fueled by a nearly $80 billion investment in network infrastructure in 2018, according to the government agency.

Despite the improvement, however, there’s still significant work required to connect rural Americans to affordable internet. The FCC approved another $20.4 billion investment early this year to close the digital gap.

In urban areas, 97 percent of Americans have access to high-speed internet. In rural areas, however, that ratio drops to 65 percent, according to the FCC. And on tribal lands, the access is worse, with only 60 percent reaping the benefits of the digital age.

There have been several legislative proposals in both the Senate and the House to prioritize broadband build-out during the pandemic.

Accessible and affordable broadband in every house has become more essential with the health crisis, according to Clyburn.

“The children go to the local parking lot of a local fast food place, so they can get on the internet to do their homework,” he said at a press conference on April 30.

“And I’m very pleased that when we had our first infrastructure meeting at the White House, the president said he got it. He understood.”

President Donald Trump earlier proposed to spend $1 trillion on infrastructure and, according to a Bloomberg article, the administration may soon release a plan.

Trump is scheduled to discuss boosting broadband access in rural areas at the White House on June 18.

The pandemic has exposed the inequities of the “homework gap,” which refers to children lacking the connectivity they need to finish their homework assignments online. The Pew Research showed that 35 percent of lower-income households with school-aged children don’t have access to high-speed internet at home.

COVID-19 has also changed the health care delivery system in the country with telehealth becoming increasingly popular. Broadband-enabled telehealth services have allowed patients to communicate with their doctors and access the care they need without going to the hospital. However, in rural areas the lack of broadband has been a key barrier in the use of telehealth services.

“From the Alaskan Bush to the Mississippi Delta, no American should get second-class broadband service, or worse yet, no service at all,” Shirley Bloomfield, CEO of NTCA–The Rural Broadband Association, said on May 13 in her testimony before the Senate Committee on Commerce, Science, and Transportation.

She praised the innovative ideas floated to address the digital gap problem, but advised Congress not “to reinvent the wheel with new programs, but to instead simply enhance, improve, and direct any new funding to existing broadband programs that have been improved over years and even decades.”

During the hearing, Sen. Roger Wicker (R-Miss.), chairman of the committee, said that proposals to solve the digital gap problem should also include ensuring permitting efficiency.

Broadband providers need to “have access to permits in a timely manner to maintain and upgrade their networks to support increased demand for internet services,” he said.

In January, Trump introduced a plan to expedite the permitting process for major infrastructure projects, proposing reforms to the National Environmental Policy Act (NEPA), a law that is essential in determining the environmental impacts of projects.

On June 4, Trump signed an executive order to expedite the permitting process, providing flexibility to agencies for complying with the NEPA in emergency situations.

Speaking at a press conference hosted by the U.S. Chamber of Commerce in February, Zippy Duvall, president of the American Farm Bureau Federation, said the streamlining of permits would help narrow the gap between rural and urban areas in broadband access.

“It’s ridiculous that a farmer’s child has to go to McDonald’s to be able to get online and keep up with his education,” he said.

Access to broadband is essential for farmers in order for them to stay connected with commodity markets and customers, but nearly 29 percent of U.S. farms have no access to the internet, according to the Farm Bureau.

The number of Americans who lack access to broadband could be significantly higher than estimated.

Some studies have shown that the true number of people without broadband access is 42 million or even as high as 162 million, the FCC stated in its broadband deployment report.

“That’s because if a broadband provider tells the FCC that it can offer service to a single customer in a census block, the agency assumes that service is available throughout,” the agency stated, noting that this assumption wildly understates the extent of the digital divide in the country.