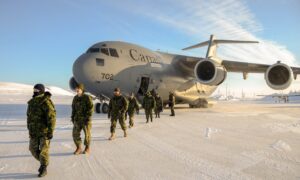 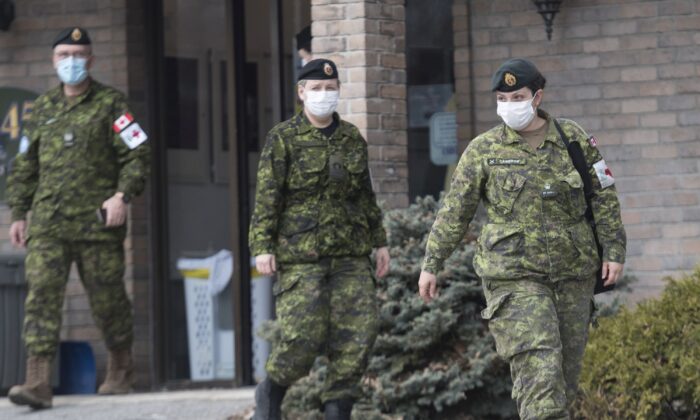 Members of the Canadian Armed Forces outside Residence Villa Val des Arbres in Laval, Que., on April 19, 2020. A mix of regular and reserve forces helped out in long-term care facilities in Quebec at the height of the pandemic. (The Canadian Press/Graham Hughes)
Canada

Following a long period of neglect, Canada’s Army Reserve has begun to be built up again in recent years. But the pandemic has set back training for reservists, something that concerns experts who hope the interruption doesn’t jeopardize hard-won gains.

“Things were improving up to the onset of the COVID situation, but then, of course, everything stopped: recruiting stopped, collective training stopped,” says Chris Champion, author of “Relentless Struggle,” a book about the 30-year fight to save the Army Reserve.

“It’s not possible to go out in the field, at least not for ordinary reservists, because of the risk of infection. So everybody was told to stand down and keep safe,” Champion explained in an interview.

“They started going back to sort of normal training on the 1st of July, but quite frankly if you’re practicing social distancing and stuff, I don’t know how the hell you do it,” Selkirk told the Epoch Times.

“We’re going to be behind the eight ball come September and if this COVID thing carries on, the same problems will carry on through the winter, so it is a very serious concern.”

The reserves received renewed attention in 2016 following an auditor general’s report that said the army failed to give clear guidance to reserve units, did not provide adequate equipment, and that the reserves suffered from low numbers due to inadequate recruitment and retention. Although the reserves needed 29,000 people, it only had 19,500. Of these, less than 14,000 were active and trained.

The army responded by enacting the Strengthening the Army Reserve program, which has sped up recruitment, provided better training opportunities, and set up thousands of full-time summer jobs for reservists. Now, pandemic precautions have set that training back.

In his 2019 book, Champion documents how senior officers and bureaucrats based mainly at National Defence Headquarters (NDHQ) worked to weaken the reserves—going against the explicit wishes of successive national defence ministers. He also tells of how the advocacy group Reserves 2000, composed of concerned citizens and honourary colonels, saved the reserves from a misguided purge.

“It’s probably a 10-year effort to rebuild the reserve because the neglect has resulted such a depletion of leadership,” he says. “To train reservists you need to have junior leaders, and those are corporals and master corporals and sergeants. So you can’t have trained soldiers unless you have qualified leaders to train them at each level that’s necessary.”

Champion argues in the book that the reserves are more important than ever given that Canada’s regular army is getting both smaller and less capable. He notes that in Afghanistan, reservists at times formed up to 20 percent of Canada’s deployed soldiers.

“The regular forces tend to think that they are the real armed forces and the reserves are just to fill in the gap when they’re needed, but really they are two quite different forces,” he says. “What you want is a good strong regular force and a strong reserve working together.”

Selkirk joined the Army Reserve (then called the Militia) in 1960. He was part of the regular full-time army from 1963 to 1984, then returned to the reserves until the early 1990s. He understands why some in the regular forces might have less esteem for fellow soldiers in the reserves.

“When I left the militia and joined the regular army I thought I was so much better than those guys I’d been serving with the week before,” he said. “That’s a normal, I think, attitude of youth.”

In future years, Selkirk and those atop the chain of command renewed their esteem for the reserves. Even so, the same old equipment shortages remain, he says.

Selkirk says Canada is not ready to face real aggression from China or Russia, noting that HDHQ is too focused on what is possible under current resources, instead of considering what is actually required and building capacity.

“It really would serve Canada well to have a plan about how are we going to get there, and these people refuse to think along those lines.”

Retired Colonel J. Paul de B. Taillon was a reservist who continued on to 22 deployments. The adjunct professor at the Royal Military College tells the Epoch Times the reserves offer unrivalled leadership training that is valuable to both military and civilian life.

“[Someone in their] late teens, early 20s goes out on an exercise and it’s a live fire exercise. He has a responsibility of life and limb—all those soldiers that are under his command. Where do you give that to any 18, 19, 20, 21, 22-year-old, exactly?” he says.

“I’ve had parents come to me and say, ‘What a difference this summer made with my child,” he adds. “He was never on time, he was dressed sloppily, he didn’t take care of things. And then, after the first summer, when he was back home, such a simple thing as tidying your bedroom becomes normative behaviour. It is a motivator.”