Pandemic Could Be Solved Quickly If Politics Thrown Out: Dr. Ben Carson 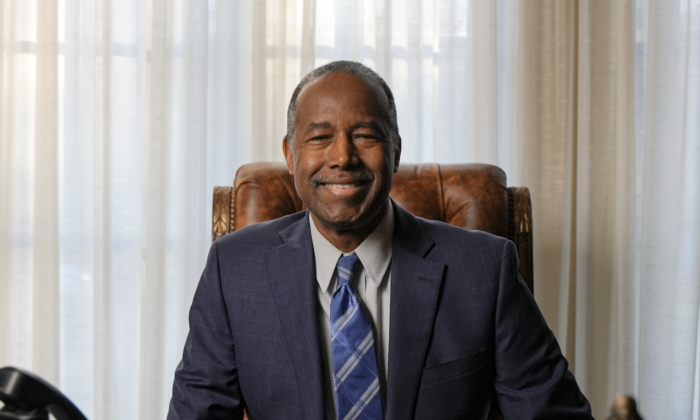 “Let’s throw the politics out. We could solve this problem pretty quickly,” he stated in an interview that will premiered on Dec. 18.

“Let’s open this thing up to all the different mechanisms,” said Carson, a renowned neurosurgeon who was awarded the Presidential Medal of Freedom—the highest civilian award in the nation—in 2008 for his work. He retired in 2013 and ran for the presidency in 2016, before serving as the secretary of Housing and Urban Development during the Trump administration.

“Let’s look around the world at things that work. Let’s look at the fact that on the western coast of Africa, there’s almost no COVID. And let’s ask ourselves, why is that? And then you see, it’s because they take antimalarials, particularly hydroxychloroquine. Let’s study that. Let’s see what’s going on there.

“Let’s listen to these physician groups who’ve had incredible success with ivermectin. Let’s look at the results with monoclonal antibodies. Let’s look at all of these things. Let’s put them all in our armamentarium so that we don’t have a one-size-fits-all system.”

The U.S. Food and Drug Administration (FDA) at one time had authorized hydroxychloroquine for treating certain COVID-19 patients but quickly revoked the emergency use authorization (EUA) in June 2020, claiming no data showed its effectiveness.

The FDA hasn’t approved or issued an EUA for ivermectin to treat COVID-19, citing the same reasons.

Using hydroxychloroquine or ivermectin to treat COVID-19 patients has been highly controversial. Some studies show, and some doctors claim, that hydroxychloroquine or ivermectin can effectively treat COVID-19 patients. A vaccine confidence insight report (pdf) from the Centers for Disease Control and Prevention (CDC) labeled such claims as misinformation or disinformation.

“COVID is a virus. Viruses mutate. That’s what they do. And they will continue to mutate,” Carson said.

Carson pointed out that fortunately, most of the time, viruses become a little weaker with each mutation.

“We can admit that and deal with it, or we can take every little mutation and every little change and try to make it into a crisis so we can frighten people and control their lives more,” Carson said.

The latest variant has been named Omicron. During a White House COVID-19 Task Force briefing on Dec. 15, CDC Director Dr. Rochelle Walensky said that she expected Omicron cases to increase in the coming weeks, urging people to take preventive measures such as being vaccinated and getting booster doses.

Carson said he has some concerns with how COVID-19 is being utilized to “manipulate and frighten people.”

“We should be using every tool available to us to fight the pandemic. There’s no question about that,” Carson said. “But that means, you know, therapeutics, which had been poo-pooed. And I understand why. Because in order to get an EUA—an emergency use authorization—to pursue the vaccines, you can’t have anything that’s effective as an alternative. So, that’s a defect in our system, we need to get rid of that.

“I think a lot of people died unnecessarily because we had that attitude,” Carson added. He shared that when he contracted the CCP (Chinese Communist Party) virus and was severely ill, monoclonal antibodies saved his life. He said monoclonal antibodies weren’t really utilized the way they should have been early on.

The FDA issued its first EUA for monoclonal antibodies to treat COVID-19 patients in November 2020.

“There are many things that have been very effective that we have not pursued, including natural immunity,” Carson said.

That’s one of the reasons people are losing confidence in federal health agencies, he suggested.

Last month, the CDC said it had no record of naturally immune people transmitting the CCP virus.

“A lot of people who probably should be vaccinated are not doing it because they see these inconsistencies, these things that make absolutely no sense,” Carson said. “This demand that everybody get a vaccination, except if you’re coming across the southern border illegally, then it’s not all that important.”

“We have a situation where you have the government advocating that children be vaccinated, even though the risk for death for a child with COVID is 0.025 percent, essentially the same as it is for seasonal flu. You don’t see us doing all this every year for seasonal flu,” Carson stated.

“The risk of mortality for a healthy child is approaching zero, and yet we’re saying do this without knowing what the long-term risks are?” he said. “And why would you subject an innocent child to a lifetime of unknown risk? It just makes absolutely no sense.

“Why not learn how to look at what’s logical and what makes sense? And why not encourage discussion of those things, rather than everybody getting their respective corners and shooting hand grenades at each other?”

The way out is real leadership, he said.

“The only path is strong leadership. We don’t have that.”