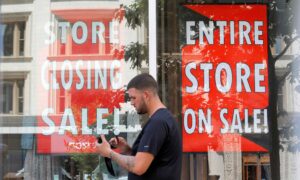 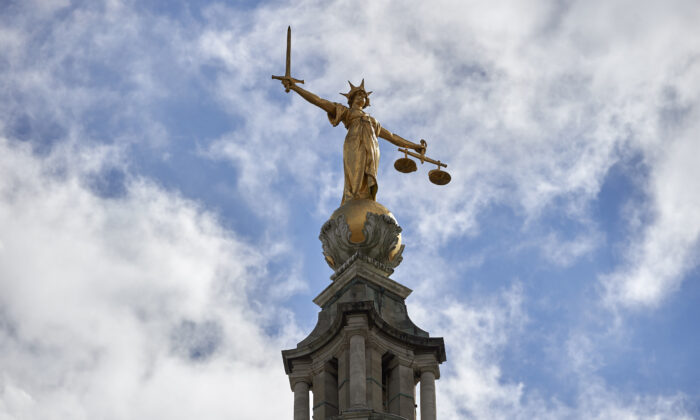 The "Lady of Justice", a 12-foot-high, gold leaf statue is pictured on top of the dome of the Central Criminal Court, commonly referred to as The Old Bailey, in central London on Aug. 21, 2016. (Niklas Halle'n/AFP via Getty Images)
UK

The pandemic has caused a backlog of “grave concern” in courts in England and Wales, according to the national justice watchdogs, with the number of people in prison awaiting trial rising by 20 percent.

Almost half of all courts were closed and jury trials halted in March in England and Wales during the first wave of the (Chinese Communist Party) CCP virus, also known as the novel coronavirus. Jury trials were reintroduced in May, with three-quarters of Crown Court buildings now back in use.

In a joint report, the four criminal justice chief inspectors warned that the impact has yet to be fully felt.

“We have grave concerns that this impact will prove deleterious to victims, witnesses, and defendants alike,” stated the report.

For example, the backlog for serious trials is 65 percent higher than normal, with some trials expected to be delayed by a year.

The report praised the overall response of the branches of the justice system but said that pre-existing significant failings had been amplified by the crisis.

“Delays mean victims must wait longer for cases to be heard; some will withdraw support for prosecutions because they have lost faith in the process,” said Chief Inspector of Probation Justin Russell, speaking on behalf of all four inspectorates in a statement.

“Witnesses will find it difficult to recall events that took place many months ago, and prosecutors waste significant periods of time preparing for cases that do not go ahead.”

The report was written jointly by the chief inspectors for prisons, probation, prosecution, and police. They singled out the backlog in courts as the issue of greatest concern.

According to the report, the prison population dropped by 4.5 percent in March to September, after trials were paused.

However, the number of prisoners on remand (awaiting trial) rose by 22 percent from pre-COVID levels to a six-year high. Almost one in six prisoners are now currently those awaiting trial.

The report said that they found “evidence of swift and sensible decision-making” when the pandemic began. However, they described the court backlog as unprecedented and called for urgent action from the government.

“The Chief Inspectors rightly recognise the swift and unprecedented work that has kept the justice system moving in the face of the pandemic,” a government spokesperson told The Epoch Times via email.

“These efforts have allowed us to rapidly increase the use of video technology, establish 36 Nightingale courtrooms and prioritise urgent cases to protect the public from dangerous criminals, while we were one of the first countries in the world to resume jury trials.”

The spokesperson pointed to a £450 million ($613 million) investment to boost recovery in courts, saying it was already yielding results.

However, Victim Support, a charity supporting victims of crime, described the report as damning and said it painted a picture of “a justice system that is facing a crisis point.”

“For years, even before the pandemic, we knew first-hand from victims that the system wasn’t working. Some victims face years of waiting while others have been told to pursue civil routes, for example applying for non-molestation orders,” Diana Fawcett, Victim Support’s chief executive, said in a statement.

She warned that it could take years for the system to recover, and echoed the chief inspector’s report in asking the government to take drastic action.