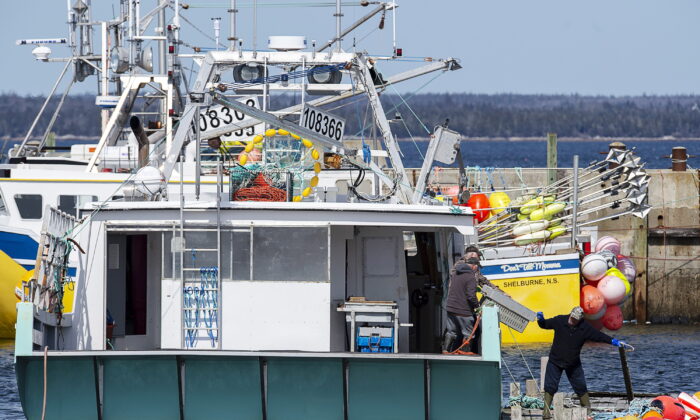 Beijing is demanding that Canadian lobster shippers sign COVID-19 liability waivers for products entering China, months after it condemned countries for closing their borders to Chinese travellers to stop the virus from spreading.

On June 19, Chinese importers started requiring a signed declaration that Canadian live and processed lobster be free of COVID-19 before it can enter China, according to a CBC report.

It’s the second hit for the industry in recent weeks, after new COVID-19 testing measures and random inspections were imposed on products in at least three major Chinese cities, leading to delayed or cancelled lobster shipments from Nova Scotia.

The restrictions come as the Canadian industry is already struggling to rebound after a precipitous fall in exports to China amid the pandemic.

In January, Canada sent over 4,300 tonnes of live lobster worth $79.3 million to China. By February, sales had fallen to 46 tonnes—worth just $940,000, according to seafood publication Undercurrent News.

Last year, Canadian companies shipped a total of $457 million worth of live lobster to China.

Meanwhile, the World Health Organization, Canadian Food Inspection Agency, and other major food safety agencies report there is no scientific evidence that COVID-19 has been transmitted through seafood or any other food products.

China expert Margaret McCuaig-Johnston says China’s rules on lobsters is related to Beijing’s requirement to buy more from the United States as part of the U.S.-China trade deal. Under the first phase of the deal, the Trump administration has required China to buy an extra US$200 billion of American products and services over two years.

“This new rule will allow China to get out of its deals with [Canadian] lobster firms,” McCuaig-Johnston, a senior fellow with the University of Ottawa’s Institute for Science, Society and Policy wrote on Twitter. She says lobster is a key product that China must buy from the United States.

U.S. Secretary of State Michael Pompeo, after a recent meeting with the Chinese regime’s top foreign affairs official Yang Jiechi in Hawaii, said that Yang said Beijing is committed to honouring the obligations of the trade deal.

In January and February, as the CCP (Chinese Communist Party) virus, commonly known as the novel coronavirus, began spreading around the world, Canada refused to impose any travel restrictions on Chinese travellers—a decision that drew praise from Beijing.

Meanwhile, the regime strongly condemned the United States, Australia, Taiwan, and other countries that closed their borders to travellers from China.

Beijing has come under increased scrutiny in recent months, as more evidence has come to light about the CCP’s coverup of the original virus outbreak in Wuhan, which led to the pandemic that crippled the global economy and has caused over 476,000 deaths by June 24, at the time of this writing.

Amid increased criticism, the CCP has engaged in retaliatory measures against several countries that have challenged or criticized the regime for its bad behaviour.

Canada has been increasingly affected by Beijing’s strong-arm tactics, with restrictions placed on some Canadian agricultural goods and the detention of Canadians Michael Spavor and Michael Kovrig after Canada arrested Huawei CFO Meng Wanzhou in December 2018 on a U.S. extradition request.

Last week, amid escalating diplomatic tensions between China and Ottawa after Meng lost a key fight in her extradition case, Kovrig and Spavor were charged with suspected espionage—indictments that could result in life imprisonment.

Other countries have also experienced retaliation for speaking out against the Chinese regime.

Australia is currently engaged in a protracted trade dispute with the regime, which has resulted in tariffs being placed on Australian barley imports, a ban on imports from four Australian abattoirs, Chinese power plants notified not to buy Australian coal, and a death sentence suddenly given to an Australian actor jailed in China.

Tensions have also escalated between Beijing and Washington amid U.S. criticism of the communist regime on a host of key issues, including its handling of COVID-19, its move to strengthen its grip on Hong Kong, its threat against Taiwan’s self-ruling status, its unfair trade practices, and its treatment of the country’s Uyghur Muslim minority.