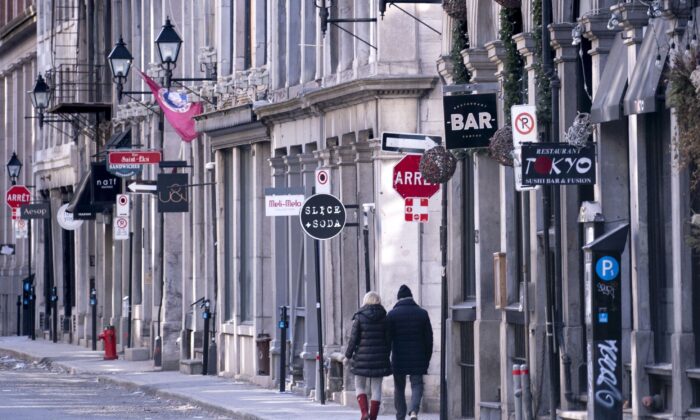 A couple walks along a deserted street in Old Montreal on March 31, 2020, amid the ongoing global pandemic. (The Canadian Press/Paul Chiasson)
Canada

Pandemic a Symptom of Beijing’s ‘Culture of Corruption and Criminality’: Former Justice Minister

The Chinese Communist Party’s continued “suppression of truth,” which has been a fundamental part of widespread persecution in China for decades, is also to blame for the COVID-19 pandemic the world is now suffering from, says former Canadian justice minister Irwin Cotler.

“The pandemic was really generated by the CCP’s suppression of the truth, by its arrest and disappearances of those who sought to tell the truth—be they medical doctors or dissidents, and by a global campaign of disinformation to cover up the truth and blame others for what has occurred,” Cotler, also a former attorney general, said in an interview.

The global pandemic is the latest symptom of the deep-seated “culture of corruption and criminality” within the Party, Cotler said, pointing to ongoing endemic human rights abuses in China, such as the forced organ harvesting of Falun Gong prisoners of conscience, the repression of Uighur Muslims and Tibetans, and persecution of journalists and democracy activists.

Beijing has faced growing international pressure over its handling of the outbreak, as questions circulate over the transparency and accuracy of official data on COVID-related deaths and infections. Some Western countries, including the United States and Australia, among others, have demanded an international investigation into the origins of the virus and how it spread.

But the fact that COVID-19 reached the level of a pandemic is due in part to the international community’s failure to hold China to account for systemic medical abuses for years, said David Matas, a prominent Canadian human rights lawyer.

“We are suffering the consequences now of turning a blind eye.”

Matas was one of the earliest researchers into China’s forced harvesting of organs from Falun Gong adherents. The Epoch Times first broke the news about transplant abuse of living Falun Gong prisoners of conscience in China in 2006.

The United States recently announced it would put a hold on funding to the World Health Organization and launch an investigation into the U.N. agency’s mishandling of the pandemic, citing its apparent close ties to China. The WHO repeatedly downplayed the risk of the spread of the CCP (Chinese Communist Party) virus, also known as the coronavirus, and repeated the Party’s infection data as fact, even as evidence of a coverup was emerging.

In ongoing efforts to address the pandemic, the world needs to stop taking information coming from the regime at face value and step up systems to keep it accountable, said Matas.

“The CCP is throwing its weight around globally to propagandize, to pressure, to intimidate using economic and political leverage to cover up, deny, obfuscate, and present a counter-factual narrative. And for too many people around the world, it’s just been politically and economically convenient to go along.”

China increased the death toll numbers in Wuhan, the epicentre of the outbreak, by 50 percent to 3,869 on April 17, saying cases were originally missed due to “overwhelmed medical resources.” But widespread skepticism remains as to whether the updated numbers can be trusted.

Although several Western countries have openly criticized China’s handling of the pandemic, Canadian officials have been silent.

When Prime Minister Justin Trudeau was asked by reporters at a press conference on April 17 about whether he felt the revised number of deaths from China was evidence Beijing has been covering up the full extent of the outbreak, he declined to directly answer, saying now is “not the time” to focus on “other countries’” management of the outbreak.

Former senator Consiglio Di Nino said Canada needs to take a tougher stance on China’s lack of transparency and disinformation around the virus outbreak and independently investigate data coming from the regime.

“[The CCP] didn’t even try to allow the world to better understand what was going on,” he said. “If we work together as a human family we can solve most of our problems … China does not see us as equal partners in that family.”

“I think the government of Canada should fully endorse and support this committee and give them the opportunity to do the research necessary to call witnesses, wherever they may be in the world, that can help us to come to a better conclusion about what’s been happening,” he said.

Cotler said “the least” Canada can do is use the Magnitsky Act to apply sanctions against specific CCP officials who have violated human rights by engaging in a deliberate coverup and the persecution of whistleblowers.

“Those specific individuals should be held accountable for what has tragically now become a global pandemic,” he said.

Cotler noted that there are other legal initiatives that can be taken to hold Beijing to account, such as those pursued by some American lawmakers. In one case, a lawmaker is asking the State Department to bring China in front of the International Court of Justice, and in another case a congressman has introduced a bill that would make it easier for Americans to bring legal action against the Chinese regime for its role in the pandemic. This week, the state of Missouri launched a lawsuit against the regime for its handling of the crisis.

“The main thing is that we stand in support with the Chinese people,” Cotler said.

With reporting by Danielle Zhu and Limin Zhou