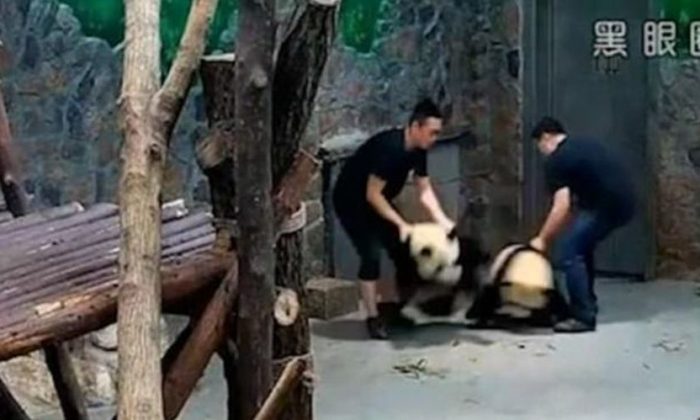 Pandas are allegedly being abused at a Chinese breeding center, according to new video footage that shows keepers throwing pandas to the ground.

Surveillance footage sourced from the Chengdu Research Base in China, among the largest Panda breeding sites, showed giant panda cubs being thrown to the ground by their caretakers. Another staff member can be seen dragging the cubs.

“When we saw the video, we thought the staff members had overreacted, even though they meant no harm to the pandas,” Wu Kongju, who is a research assistant at the base, told Chinese Communist Party mouthpiece Xinhua. “But we hope people can show more understanding toward the panda keepers, because although giant pandas look cute, they are quite strong and can be violent.”

“The cub bit my hand really hard. Its teeth cut into my flesh and my hand started bleeding,” panda keeper Guo Jinpeng said. Worker Xie Huhai, said staff “often get hurt by the pandas,” as reported by the Telegraph. “Scratches and bites are daily occurrences,” he said.

But some users on Chinese social media websites didn’t believe the explanation.

“I don’t care what he has to say, they were just babies,” wrote Sina Weibo user Loo Jiaying, according to the BBC. “It made me so angry to watch him throw a defenseless cub around. If he was so worried about his safety, why wasn’t he wearing protective equipment like gloves?”

And Chinese state-run media said that officials spoke to staff members and have “taken measures.”

In China, even though the panda are seen as the national animal, pandas routinely face cruelty in captive breeding programs. According to The Dodo:

Though the giant panda is seen as a national treasure in China and is closely protected by the government, this is far from the first instance of cruelty that pandas face in captive breeding programs. In recent years, giant panda conservation efforts have turned into a multimillion-dollar industry, with breeding programs giving little thought to successfully returning pandas to the wild. In facilities such as Chengdu, cubs are regularly taken from their mothers right after birth and raised separately until they are ready to be displayed in a nursery or lent to a foreign zoo at a considerable cost. Adult female pandas are continuously drugged and inseminated, with births seen as a numbers game by the programs.

There are an estimated 2,060 giant pandas left in the world, according to the International Union for Conservation of Nature.