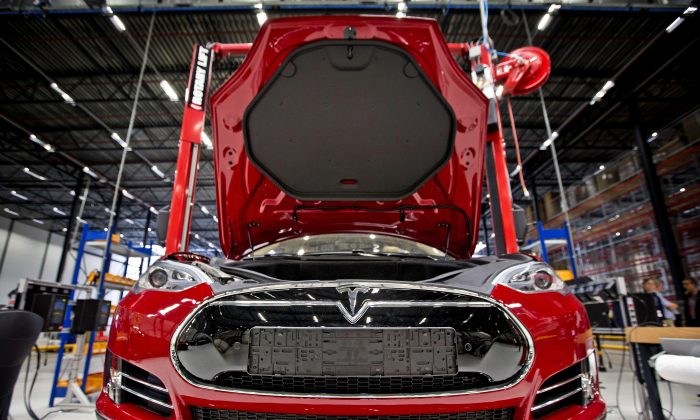 A Tesla electric car on an assembly line in the Netherlands, Aug. 22. (Guus Schoonewille/AFP/Getty Images)
Business

Panasonic will supply Tesla with close to two billion batteries over the next four years, powering the Model S sedan and soon-to-come Model X SUV with higher energy density.

“We are extremely proud to be a strategic partner of Tesla,” stated Yoshihiko Yamada, president of the Panasonic’s subsidiary, Automotive & Industrial Systems Company on Wednesday. “Panasonic will increase its production capacity of lithium-ion battery cells to supply Tesla’s growing needs as it expands its production of EVs.”

According to calculations by Business Insider, the new batteries will allow Tesla to manufacture around 285,000 cars. At this moment, Tesla is building around 21,000 cars per year and the new arrangement would allow it to quadruple production rates.

Tesla Motors Inc. and Panasonic Corp. amended a 2011 contract, which originally promised about 560,000 cells designed specifically for electric vehicles. The 2011 contract would have supplied cells for 80,000 vehicles in total and had an expiry date of 2015.

“This expanded agreement with Panasonic is important to Tesla as we continue to increase the pace of production,” stated Elon Musk, Tesla Co-Founder and CEO. “We look forward to strengthening our relationship with Panasonic, and I’m confident that this partnership will continue to be an integral part of Tesla’s success for years to come.”

Tesla expects to deliver 21,000 Model S sedans this year worldwide, and double that next year as the Model S starts selling in Europe and Asia.

The Model X SUV will go into production by the end of 2014.