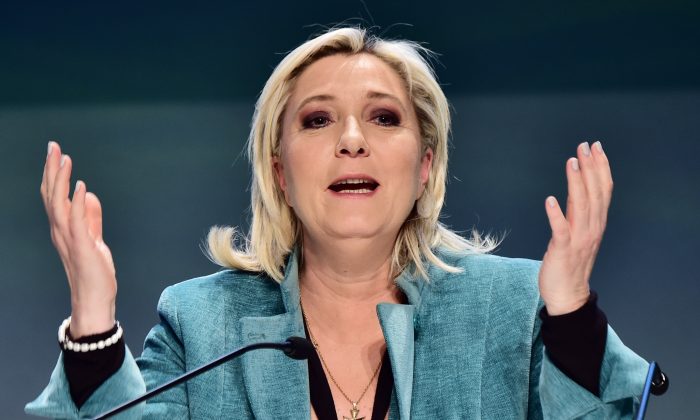 Marine Le Pen is among the latest prominent figures to be swept up in the Panama Papers scandal. But anyone hoping that this scandal can halt the rise of her far-right Front National movement has seriously underestimated her—and overestimated France’s political mainstream.

The allegation—made by Le Monde—is that close aides of Marine Le Pen created a series of offshore accounts based variously in Panama, Singapore, Hong Kong, and the British Virgin Islands. Le Monde claims this complex offshore system was centered around Frédéric Chatillon, a former media adviser to the Front National. Chatillon has already been charged with electoral fraud relating to the 2012 presidential and legislative elections.

The Front National (FN) has strongly denied any suggestion that it has avoided paying tax. It has argued that the party should not be held to account for the actions of former employees and even dismissed the practices of Panamanian law firm Mossack Fonseca as an obvious symptom of unchecked globalization.

Le Pen has long sought to cleanse the Front National’s image, moving it away from the divisive rhetoric espoused by her father Jean-Marie Le Pen during his time as leader. It would therefore stand to reason that these financial allegations would somewhat detract from the “woman of the people” image Marine Le Pen has set out to create.

Her attempts to define herself as a down-to-earth and approachable politician were particularly in evidence when she stood as a candidate for the leadership of the regional council in the Nord-pas-de-Calais region in November 2015. And it seemed to have some impact. She ultimately lost the contest to mainstream-right candidate Xavier Bertrand, but it was a very close call.

Has France Really Seen the Back of the National Front?

She had even beaten Bertrand in the first round of voting, positioning herself as the polar opposite of his aloof Parisian elitism. Le Pen was seen to empathize with the issues faced by local voters, not least the perceived threat posed by migrants in the Calais region and the economic difficulties of young people.

Indeed, one of the Front National’s central policies is to reaffirm the importance of the state in public affairs—particularly welfare and public services such as transport. That means that more tax needs to be paid by the French public.

But the party also proposes scrapping the current income tax regime in favor of a more progressive system which would mean a fairer distribution of taxes. Multinational companies would be subject to a 15 percent levy on all profits to help support small businesses. Earnings over 1 million euros would be subject to an unspecified level of centralized taxation (although apparently this level would apparently be lower than that imposed on higher earners at the moment).

The image of political outsider and woman of the people has its limits for Le Pen. Neither Marine nor Jean-Marie can claim to be truly on a level with the vast majority of the electorate. The Le Pens owns a mansion in the affluent Parisian suburb of Saint-Cloud and they both studied law at prestigious institutions.

The fact remains, though, that Le Pen is different from her political adversaries. Mainstream politicians on the left and right appear to have reached a vague, though unacknowledged, consensus around the need for economic reforms but Le Pen is arguing for something much more radical. She wants the state to be much more involved and for the French model of work, with its 35 hour week and stable, privileged public sector, to be reinforced.

Young people, students, and workers have been protesting across the country about the dramatic reforms the socialist government is making to employment laws. They are vehemently opposed to plans to make it easier for firms to hire and fire workers to make life easier for them in tough economic times.

With no real opposition coming from other political parties on this issue, Le Pen can continue to claim that hers is the only party to really stand up for the interests of the ordinary person, even if in reality she has little in common with them.

Nor has the mainstream made a particular effort to challenge the FN’s anti-immigration rhetoric (which has seen it argue for limiting the number of immigrants allowed into France to 10,000 per year.

Employment, not tax avoidance, is the big issue of the day, so any policy on that necessarily speaks much more loudly to voters than any of the revelations from the Panama Papers.

And with Le Pen’s niece Marion Maréchal Le Pen on board as a young, charismatic figure, the party appears to have less of a generational divide with young people than the mainstream parties. Despite the widespread press coverage in France and overseas, these claims will do little to dent the electoral hopes of the FN or indeed Le Pen.

David Lees is a teaching fellow in French studies at the University of Warwick in the U.K. This article was originally published on The Conversation.