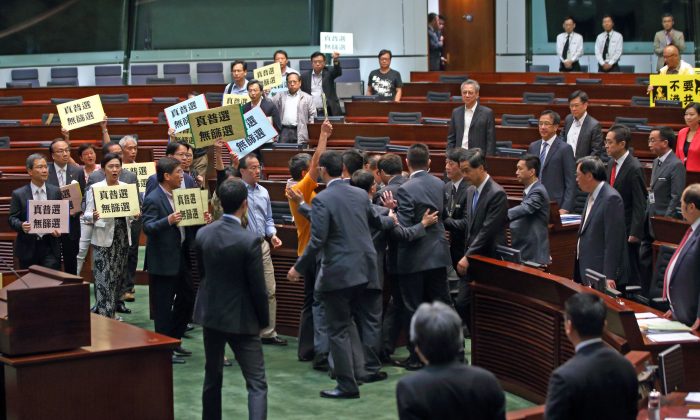 Over 20 pan-democratic LegCo members collectively walk out to protest against Chief Executive Leung Chun-ying during Question and Answer Session in LegCo chamber on July 3, 2014. They are holding banners demanding for “Genuine Universal Suffrage, No Screening.” (C.S. Poon/Epoch Times)
China

HONG KONG—As soon as Hong Kong Chief Executive Leung Chun-ying arrived at a question-and-answer session at the Legislative Council (LegCo), more than 20 pan-democratic councilors got up and walked out.

This planned protest on July 3 was the first such incident since the 1997 handover of Hong Kong’s sovereignty to China.

The pan-democrats left their seats holding protest signs and chanting, “Genuine universal suffrage, no screening!” as Leung walked to the podium. After half a minute, chairman Jasper Tsang put the meeting on hold.

One of the protesters, Raymond Wong Yuk-man, threw a glass cup at Leung. He and two others were promptly carried out by security guards, and the other pan-democrats were forced out of the chamber step by step.

Except for the cup-throwing incident, the pan-democrats protested in a peaceful and restrained manner.

After they left the room, Leung said their violence would affect the behavior of youngsters. He also criticized the Occupy Central movement, a nonviolent protest for universal suffrage planned for this month by the Hong Kong Federation of Students, saying it would waste police resources and create social instability.

The pan-democrats said they would continue to politely and rationally protest inside and outside the LegCo chamber.

After the question-and-answer session, the pan-democrats said they would not endorse Wong’s violent cup-throwing behavior, but they warned that Leung should not use the cup incident to avoid discussing the hundreds of thousands of people who have recently protested for change in Hong Kong.

About 790 thousand people voted for democracy in the Occupy Central referendum, and 510 thousand people took to the streets in Hong Kong’s annual July 1 march to demand universal suffrage, ask Leung to resign, and protest the white paper that asserted the Chinese Communist Party’s (CCP) control over Hong Kong. In addition, thousands of college students rehearsed Occupy Central by peacefully holding a sit in the night of July 1 on Chater Road but were forcibly removed by police.

CCP mouthpieces Global Times and People’s Daily criticized the July 1 parade, but Leung gave no response to any of these incidents, which seemed to make Hong Kongers even angrier.

“With 510 thousand people on the street asking Leung to step down, the Chief Executive could still keep silent for a day and a half,” said Civic Party leader Alan Leong Kah-kit.

Leong said Leung irritated the public by welcoming the CCP’s white paper and implementing a development plan in the Northeastern New Territories that would force citizens from their homes. He added that the LegCo has always been a place to narrow down differences and seek consensus, and if it has lost this function, the pro-Beijing camp and Leung should take the blame.

“The central [Chinese] government, with the Global Times and People’s Daily, is cursing hundreds of thousands of Hong Kong people,” said Leong. “What type of government is this, completely ignoring the public opinion? We must be prepared for a future peaceful fight,” said Leong.

Democratic Party chairperson Emily Lau Wai-hing said that such a large number of pan-democrats leaving their seats together was unprecedented in the history of the LegCo. She criticized Leung Chun-ying for acting as if nothing happened.

With Leung’s unpopularity and the current political turmoil in Hong Kong, many are wondering whether Leung will step down.

During the question-and-answer session, members of the pro-Beijing camp criticized the pan-democrats’ behavior. The only exception was Liberal Party leader James Tien Pei-chun, who questioned how the government was going to win the pro-democracy camp’s 5 votes on the constitutional reform for universal suffrage by 2017.

Tien asked if Leung would consider stepping down early.

“By next March, if the reform package is not passed, you have two years left,” Tien said to Leung. “It will be even more intractable by 2017. Have you considered resigning and getting someone else to be Chief Executive so we do not need to waste two more years?”

Leung answered, “I will not resign and will continue to do the work that the Chief Executive should do.”

“Leung’s own opinion [on his resignation] does not matter,” said Hong Kong senior political and economic commentator Liao Shiming. “The key is the attitude of Beijing.”

“Leung Chun-ying has almost lost the trust of Hong Kong people, and it will be very hard for him to sit on the Hong Kong Chief Executive position,” Liao added.

Liao said Beijing authorities certainly do not want Leung to stay in his position with all the social uprising in Hong Kong. Other news sources are in agreement with Liao’s opinion.

However, Liao said, Beijing worries that if this precedent is allowed, the CCP’s governance will take a hit.

“Especially within the mainland, it will light up some other events. This is what they are afraid of,” he said.

Liao said Tung Chee-hwa was an example. When 500 thousand people marched in 2003 to protest Article 23, which would have silenced all anti-CCP voices in Hong Kong, Beijing did not change the Chief Executive immediately, but waited for a period of time.

“Beijing is likely to allow a cooling-down period, a few months or half a year, and then they might consider letting Leung resign or step down. Obviously this is not something Leung can decide,” Liao said.

Liao believes that Leung will not be able to complete his full term. If he did, Hong Kong society would continue to divide and social conflict would accelerate, which is not what Beijing wants.

The intensification of street democratic movements is due to the lack of normal communication channels between the public and the government, and the Leung administration has to be held responsible for that, Liao said. He added that Leung’s toughness and aggressiveness are bolstered by his close affiliation with CCP insiders such as former CCP vice chair Zeng Qinghong, who was in charge of Hong Kong affairs for the past ten years.

The CCP’s usual practice is that the vice chair acts as the head of Hong Kong and Macao affairs. During Jiang Zemin’s administration, Zeng Qinghong played this role.

Liao said that when Xi Jinping became vice chair, he seemed to be responsible for Hong Kong affairs, but a further look indicated that he had no real power to intervene in Hong Kong.

“So the people in charge of Hong Kong and Macao are basically Zeng Qinghong’s original team and are still under his influence,” said Liao. “Many of the central government’s policies in Hong Kong, including some speeches and decisions within Hong Kong and Macao, are directly related to Zeng.”

Liao said that the Jiang Zemin faction of the CCP wants to create turbulence in Hong Kong because the Jiang faction members, especially Zeng, are being investigated.

“The message to Beijing is, ‘If you investigate us, then you won’t be able to cope with the unrest situation, and many things could go wrong. You’d better stop the investigation, and then we can have a private agreement and let go all these things,'” said Liao. “In such a context, the situation in Hong Kong will get worse and will see more intense social conflict.”