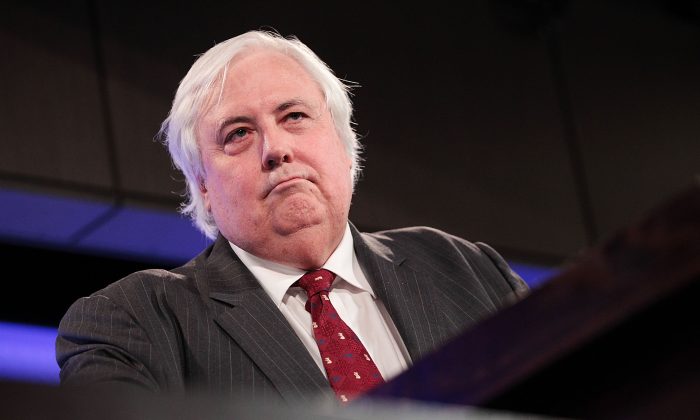 SYDNEY—Federal MP and businessman Clive Palmer has used an appearance on ABC’s Q&A program to warn about the Chinese government’s attempts to destroy Australia’s wage system and to steal the nation’s natural resources by taking over Australian ports.

The Palmer United Party (PUP) leader has come under fire for his comments on Aug 18 that described the Chinese government as “bastards” and “mongrels”.

“I don’t mind standing up against the Chinese bastards and stopping them from doing it,” Mr Palmer said on the ABC programme.

“I’m saying that because they’re communist, because they shoot their own people, they haven’t got a justice system and they want to take over this country.”

However, Mr Palmer has refused to apologise for his comments.

In a tweet on Aug 19, he stated that his comments were not intended to refer to the Chinese people but rather to the Chinese state-owned enterprise CITIC Pacific, which operates mines in Western Australia.

Mr Palmer has been involved in a legal row with CITIC Pacific, which has accused the Federal MP of misusing $12 million.

In a radio interview with Fairfax radio station 3AW on Aug 19, Mr Palmer claimed that the term “mongrels” accurately described the Chinese government.

“They’re a government-owned body that executed people in China, doesn’t give them the right of free speech, doesn’t allow them to talk on the radio like I am now … they have one day trials, they don’t have any democracy,” he said in the interview.

“I feel for the Chinese people that live under such tyranny.”

Federal politicians have been distancing themselves from Mr Palmer’s remarks in fear of jeopardising Australia’s relationship with China.

“Peripheral issues will not distract the government in its work to broaden and deepen this most important relationship,” Trade Minister Andrew Robb said.

“I think it is hugely damaging for Mr Palmer to make those sort of comments,” Mr Hockey told reporters on Aug 19.

Labor leader Bill Shorten said the comments did not reflect the views of most Australians.

“I think a lot of Chinese-Australians would understandably feel hurt by these comments,” Mr Shorten said.

Despite the furore, two of Mr Palmer’s senators have defended their leader.

“If anybody thinks that we should have a national security and defence policy which ignores the threat of a Chinese communist invasion—you’re delusional and have got rocks in your head,” she said in a statement.

“There has never been the slightest suggestion on his part of a prejudicial view of members of the Chinese community,” he said in a statement.