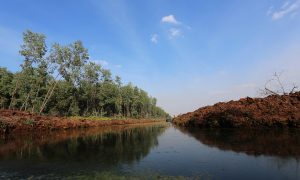 Wilmar, the world’s largest palm oil company, has unveiled a tool it says will help eliminate deforestation from its global supply chain.

The tool is an online dashboard that maps the company’s supply chain, including the names of locations of its refineries and supplier mills. The system greatly increases transparency around Wilmar’s palm oil sourcing, a key component to the zero deforestation policy it signed in December 2013.

Public disclosure of its supply chain is a major departure from business-as-usual practices in the palm oil industry, where ownership of plantations and relationships between companies have often been shrouded by complex corporate structure and a web of affiliated entities. That has made it difficult for environmental groups, government officials, and even companies themselves to determine whether palm oil in a given supply chain is being produced at the expense of rainforests or peatlands.

Therefore traceability has been a key demand from environmentalists in their campaigns to clean up the sector. And traceability is what the system delivers, says Scott Poyton of The Forest Trust, which brokered Wilmar’s zero deforestation policy and built the dashboard.

“Wilmar is the first agro-industrial giant to offer a way to follow palm oil all the way back to the mills where the oil is processed,” said Poynton, in a statement.

Wilmar says the system will also help its third party suppliers comply with the policy.

“Our main focus is to support our suppliers to tackle the challenges they’re facing, so that they can start down a more sustainable path,” said Jeremy Goon, Wilmar’s Chief Sustainability Officer.

The dashboard also provides information on two other pillars of Wilmar’s policy: sourcing from smallholders and engaging with stakeholders, including NGOs like Greenpeace whose fierce criticism over the years drove it to commit to zero deforestation. Accordingly, the platform includes a mechanism for reporting breaches of the policy and tracking how Wilmar addresses those grievance.

Because Wilmar had a stake in Kencana Agri, the clearing breached the palm oil giant’s commitment, according to Elfian Effendi, Executive Director of Greenomics

“The cleared areas were classified as high carbon stock (HCS) forests according to Wilmar’s Zero Deforestation Policy,” he told mongabay.com. “This clearance was clearly not in line with Wilmar’s zero deforestation policy.”

Greenomics filed a grievance with Wilmar, noting that Kencana Agri was continuing to clear forests without completing high conservation value (HCV) and HCS assessments. That issue is now documented in the system and is in the process of being addressed.

“It’s lodged as a grievance in the new transparency tool,” TFT’s Poynton told mongabay.com. “With respect to how it’s being handled, Wilmar and TFT have engaged with the company, which has resulted in this policy which is in effect as of 19 Jan 2015. Clearance has been halted and this report is the outcome of the discussion.”

“Wilmar and TFT are both grateful for Greenomics for identifying this issue. It’s this sort of information that can help accelerate the transformation process so we see reports like those from Greenomics and other NGOs as being a critical partnership in the policy implementation process.”

Greenomics said it will continue to monitor the situation as well as concessions belonging to other companies that have made zero deforestation pledges.

“We believe that intensive spatial monitoring by civil society groups will help monitor the implementation of the zero deforestation policy at concession level,” said Effendi. “The presence of USGS’s Landsat imagery provides a very powerful data on landcover situation in every two weeks.”

The new platform was also welcomed by another long-time critic of Wilmar, Glenn Hurowitz, Chairman of Forest Heroes, a campaign that pushes companies to adopt zero deforestation policies.

“No one has ever aimed for this level of transparency in agriculture commodities. Wilmar has more than 800 palm oil suppliers, so the company covers the bulk of the industry,” Hurowitz said in a statement. “If the on-line tool released today does lead to real engagement between industry, local civil society, and all stakeholders, it will dramatically accelerate the transformation of the palm oil industry.”

Wilmar is now one of several palm oil majors that has committed to excluding palm oil linked to deforestation, peatlands conversion, exploitive labor conditions, and social conflict from its supply chain. But given the scale of its operations and supplier network, its implementation process will likely be the most complex in the industry. So in other words, if Wilmar can successfully implement zero deforestation, there are no excuses for other companies not to do the same.

“The palm oil industry has been on a journey of transformation over the last few years,” Poynton said. “And Wilmar is taking the lead in this process. Not only is the company being transparent, it is giving stakeholders the opportunity to engage with the company, especially through its supply chain map and grievance procedure. This helps breed a culture of collaboration that will drive rapid change. It’s a model that can be followed by any commodity sector that wants to change practices that are having devastating environmental and social consequences.”

This article was written by Rhett A. Butler, the head administrator for news.mongabay.com. This article is republished with permission, original here.