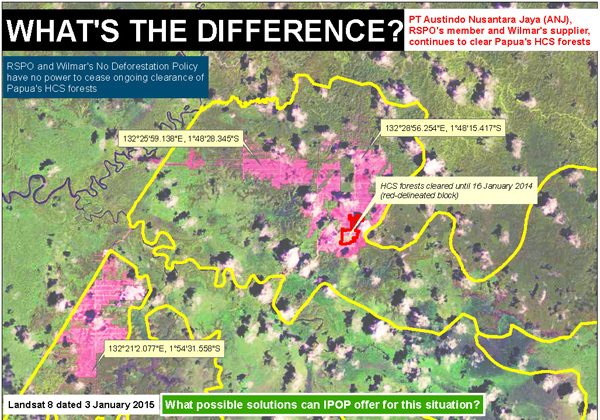 Landsat imagery acquired and analyzed by Greenomics shows that Austindo Nusantara Jaya Agri (ANJ) is clearing high carbon stock forests in the southern part of West Papua’s Bird’s Head Peninsula in Indonesian New Guinea. According to data from Global Forest Watch, clearance is occurring within an “Intact Forest Landscape”, which is defined as “an unbroken expanse of natural ecosystems within the zone of current forest extent, showing no signs of significant human activity, and large enough that all native biodiversity, including viable populations of wide-ranging species, could be maintained.”

The activity is occurring despite zero deforestation policies established by Musim Mas and Wilmar, palm oil giants that buy from ANJ, which itself is a member of the Roundtable on Sustainable Palm Oil, a body that sets eco-certification standards.

Reached by mongabay.com, Wilmar said it was unaware of the clearing by ANJ but promised to investigate the matter. The company noted that no one had filed a grievance via its online complaints system to report on the activity.

Musim Mas did not respond to request for comment. But the company’s sustainability policy suggests that ANJ’s clearing would not represent a breach of its zero deforestation pledge, since it only applies to mill-level operations in 2015. Musim Mas doesn’t plan to extend the policy to the plantation level until 2017.

“ANJ is one of the crude palm oil (CPO) suppliers to companies that are currently in the process of cleaning up their supply chain from deforestation,” Greenomics told mongabay.com. “ANJ has to stop clearing Papua’s forest if they still want to continue to be a CPO supplier to the zero deforestation policy-adopted companies. Given that no guarantee that ANJ will stop its role in destroying Papua’s forests, Wilmar and Musim Mas should take measurable actions — that are in line with their no deforestation policy — to respond to the unstoppable Papua’s forest clearing by ANJ.”

Wilmar has taken early steps to address this issue by launching an online dashboard that maps its supply chain, including companies it buys from. However the dashboard doesn’t presently include entries for ANJ. Musim Mas discloses its relationship with ANJ on its web site.

ANJ has itself admitted to breaching RSPO rules for new planting. Last July, the company told Mongabay that “an infringement has occurred” and it would suspend “all activities…. on site.” However Greenomics’ analysis shows that clearing has continued in nearby concessions despite that statement.

ANJ didn’t respond to request for comment on the evidence of new clearing.