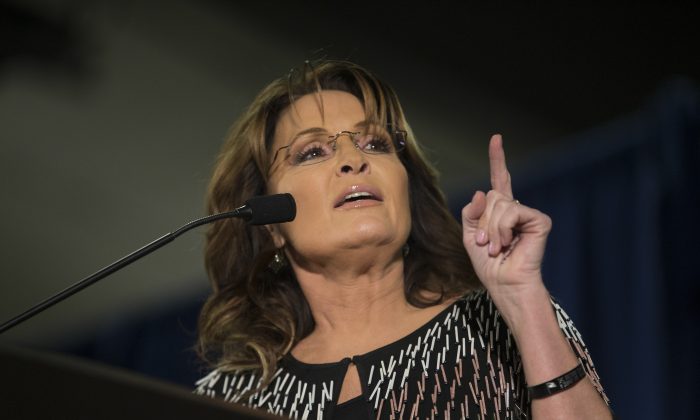 DES MOINES, Iowa—If the Republican Party is on the verge of an implosion, Sarah Palin may have been the one who lit the fuse.

Palin’s complicated relationship with GOP leaders over the past eight years is a microcosm of the party’s broader struggles with its most restive members. What started with an embrace by party leaders evolved into wary tolerance, followed by a potentially irreparable split.

So it’s perhaps little surprise that Palin is re-emerging on the national political scene at this moment of reckoning for Republicans. While she’s hardly the conservative kingmaker she once was, Palin remains a favorite of the tea party insurgency, and her endorsement of Donald Trump for the 2016 GOP nomination gives him an added boost of conservative, anti-establishment credibility.

“He’s been going rogue left and right,” Palin said Tuesday, with a beaming Trump standing by her side. “He’s been able to tear the veil off this idea of the system.”

Mainstream Republicans have tried for the past several years to keep their system together by bringing lawmakers elected as disrupters into the fold rather than pushing them aside. It’s a strategy that succeeded in winning the party the House in 2010 and the Senate in 2014, but it did little to achieve such conservative goals as overturning President Barack Obama’s health care law or blocking increases in the nation’s debt ceiling.

Now, the GOP system is cracking, leaving some in the establishment feeling they would be the outsiders in a party helmed by Trump—or by Texas Sen. Ted Cruz, a frequent tormentor of Republican leaders who is a strong contender for the nomination.

“I thought I was a traditional Republican conservative,” says Bob Dole, the 1996 Republican presidential nominee who represented deep red Kansas in Congress for decades.

Sarah Palin: Trump ‘Would Let Our Warriors Do Their Job’

Dole has been an especially vocal critic of Cruz, who has blamed Republican failures in presidential contests on the party’s tendency to elect mainstream candidates like the longtime Kansas senator. However, Dole suggested in an interview Wednesday that he might be able to make peace with a Trump presidency, saying the businessman’s reputation as a “dealmaker” could mean he’s able to work with Congress.

Palin’s endorsement of Trump is seen as a knock against Cruz, who has been on the rise in Iowa for several weeks. She campaigned for Cruz when he ran for the Senate in 2012, and he’s said her support was instrumental in his victory.

For all of her firebrand conservatism, Palin owes her place on the national stage to the mainstream Republican Party. She was a little-known Alaska governor when Sen. John McCain—seen by some Republicans as an embodiment of the party establishment—tapped her as his running mate for the 2008 election.

Palin was an awkward fit as No. 2 on the ticket, but she built an enthusiastic following with conservatives. She blended more neatly into the tea party movement that blossomed during the first years of Obama’s presidency and flirted with a White House run of her own in 2012 before concentrating on political punditry and reality television.

Now it’s Trump and Cruz who are pushing the anti-establishment movement further than she ever managed. With less than two weeks before the Iowa caucuses kick off the nominating process, strong showings by the billionaire and the senator could turn the Republican race into a two-man contest.

To be sure, a slew of politically experienced rivals are still hoping to blunt Trump’s and Cruz’s momentum once voting begins. But for now, more mainstream voters are dividing their support among Florida Sen. Marco Rubio, former Florida Gov. Jeb Bush, New Jersey Gov. Chris Christie and Ohio Gov. John Kasich, making it difficult for any one of them to mount a strong challenge.

In most recent elections, Republicans have tended to nominate center-right candidates who were seen as having the best prospects in the general election. Even after the 2010 tea party takeover in the House, the GOP nominated Mitt Romney—the former governor of moderate Massachusetts—in the 2012 presidential race.

Four years later, many Republican voters not only believe that nominating a centrist would cost them another shot at the White House, but they also are deeply skeptical that an establishment GOP president would follow through on their priorities.

“I’m so sick of the Republicans,” said Scott Doremus, a retired commercial airplane pilot from Wolfeboro, New Hampshire, who is supporting Cruz. “Republicans have become just like Democrats.”

“You can’t be a wuss, and I’m tired of wusses in this country,” said Marmon, who attended a rally with Trump in her hometown Wednesday. “They need to stand for something or we’ll fall for anything.”