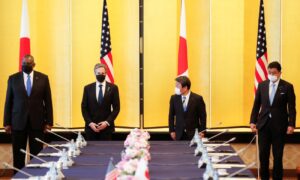 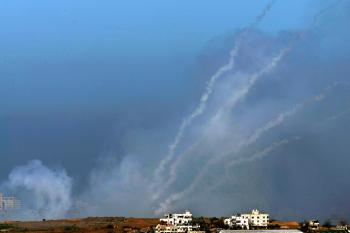 A barrage of four Palestinian Qassam rockets leave smoke trails in the sky as they are fired by Hamas militants on January 6, 2009 inside the Gaza Strip towards the Israeli town of Sderot, as seen from Israel's border with the Palestinian territory (David Silverman/Getty Images)
Opinion

David Tompkins
biggersmaller
Print
Many obstacles to peace exist in the Middle East, but none weighs more heavily than the political instability in the Gaza Strip that prevents the Palestinians from being a reliable partner in peace. This is the problem facing U.S. President Barack Obama and his special envoy George Mitchell as they pursue a two-state solution to the Israeli-Palestinian conflict. Whether peace between Israel and the Palestinians can be achieved at this moment or not, restarting the peace process may help pull the Palestinians back from the calamities of civil war and increasing radicalization.

This week, Fatah and Hamas will meet in Egypt for the third time to try to hammer out an agreement on a transitional government that would lead to presidential and legislative elections. The meeting is unlikely to result in an agreement that can be tolerated by the international community though. The international Quartet (the UN, the United States, the EU
and Russia) insists that any Palestinian government has to recognize agreements that have already been signed, recognize Israel, and condemn violence. Hamas rejects all three points.

The Character of Hamas

Founded in 1987, Hamas a year later published a Charter called the “Covenant of the Islamic Resistance Movement.” According to the Charter, Jews and Christians can only exist in Palestine when they fall under the “wing of Islam,” meaning Hamas will accept nothing short of the destruction of Israel and the imposition of an Islamic state. The Charter specifically denounces any negotiations or peaceful solutions as a contradiction of the principles of the Islamic Resistance Movement.  For Hamas, negotiating a truce appears to be only a tactical and temporary move employed so as to better reach its goal of eliminating Israel.

When the Palestinian Authority has negotiated with Israel, Hamas has attacked Israel with Quassam rockets and suicide bombs in order to create mistrust and undermine the dialogue. Yet since winning the Palestinian elections in January 2006, its political wing seems on the surface to have moderated somewhat. It even accepted a six month truce with Israel in 2008.

However, this moderation was not a genuine shift in its willingness to make concessions to Israel or its political rivals, but only a ploy for time. Hamas used the truce to import Chinese made rockets which are far superior and greatly enhanced their ability to strike Israel, making the security situation much more unstable.

After the truce ended on Dec. 19 Hamas began using the Chinese-made 122mm WS-1E rocket produced by the Sichuan Aerospace Industry Corporation that has a 25 mile (40 km) range instead of the 9.9 mile (16 km) range of the Quassam rocket—their handmade rocket. This allowed Hamas to suddenly target as many as 1 million Israelis. The increased risks of this more advanced weapon to Israel’s civilian population and the 300 rockets and mortars fired into Israel in the 8 days following the end of the truce precipitated an all-out Israeli military campaign in the Gaza Strip.

Human Rights Watch reports that during the Israeli invasion of Gaza Hamas made themselves busy by executing 32 political rivals and maiming dozens more by shooting them in the legs. They targeted Fatah members, especially those who worked in the Fatah-run security services of the Palestinian Authority.

Hamas’ popularity grows among ordinary Palestinians as confidence in the peace process wanes. When there is no hope for peace, Hamas is seen as the most lethal weapon the Palestinians have.

The term for Palestinian President Mahmoud Abbas expired in January 2009. A March poll by the Palestinian Center for Policy and Survey Research indicates that the recent incursion into Gaza by the Israelis weakened his popularity by 2 percent to 40 percent since early December and strengthened the support for Hamas by 5 percent to 33 percent.

If Hamas wins the upcoming elections expected in 2010, then the prospects for peace will be gone in the near future.  This is a distinct and growing threat.

Palestinians thirst for their own state almost as much as Israelis are nervous about giving in and agreeing to it. The international community must consider whether it can help keep the Palestinians from swinging to the extremist and uncompromising political camp of Hamas that is committed to violence and its own narrow ideology—and what to do if they fail.