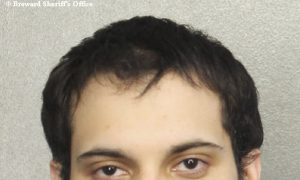 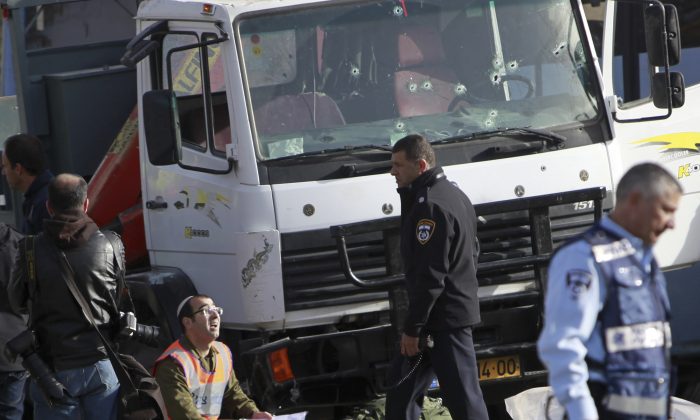 Israeli police investigates the scene of an attack in Jerusalem on Jan. 8, 2017. (AP Photo/Mahmoud Illean)
International

JERUSALEM—A Palestinian rammed his truck into a group of Israeli soldiers in Jerusalem on Sunday, killing four soldiers and wounding 17 others in one of the deadliest attacks of a more than yearlong campaign of violence.

Prime Minister Benjamin Netanyahu said the driver was a supporter of the ISIS terrorist group, and suggested the attack was inspired by similar assaults in Europe. Palestinians with no known links to ISIS have carried out vehicular assaults in the past.

“We know the identity of the attacker. According to all the signs, he was a supporter of the Islamic State,” Netanyahu said in a statement delivered at the attack site. “We know that there is a sequence of terror attacks. There definitely could be a connection between them, from France to Berlin and now Jerusalem.”

Security camera footage shown on Israeli TV channels showed the truck barreling at a high speed off the road and into the crowd of people in the Armon Hanatziv neighborhood. The truck can be seen backing up quickly before the driver is shot dead.

“There was no sense in that reverse,” Leah Schreiber, a witness, told reporters. “He drove backward to crush more people. That was really clear.”

While Israel has arrested several Palestinians accused of traveling to Syria to fight with ISIS, the group is not known to have a presence in Israel or the Palestinian areas. Israel has said two gunmen who carried out a deadly shooting in Tel Aviv last June were inspired by ISIS, but were not members.

The attacker came from the east Jerusalem Palestinian neighborhood of Jabel Mukaber, near the attack site. Police barred publication of his name.

Neighbors said he espoused an ultra-conservative version of Islam, known as Salafism, but that he did not have a known affiliation with any Palestinian political faction. Salafism is split into peaceful and violent streams, with the latter promoting ideas that are close to those of ISIS.

Neither ISIS nor any other group claimed responsibility for Sunday’s attack.

Netanyahu said Israel had blockaded Jabel Mukaber and was planning other steps, but did not elaborate. He said the dead were all soldiers—three women and a man. The Israeli military said three were cadets and one was an officer.

Israel’s national rescue service said one of the wounded was in serious condition.

The attack matched the deadliest in a more than a yearlong wave of Palestinian shooting, stabbing and vehicular attacks against Israelis. The two gunmen in last June’s attack in Tel Aviv also killed four people, who were eating dinner at a popular tourist spot.

Since September 2015, Palestinian attackers have killed 40 Israelis and two visiting Americans. During that time, 230 Palestinians have been killed by Israeli fire.

During the past year and half of violence, Israel has said most of the Palestinians killed were attackers while the rest died in clashes. The Palestinians and rights groups have accused Israel of using excessive force in some confrontations.

The violence has slowed of late, but tensions have been rising since President-elect Donald Trump promised to move the U.S. Embassy from Tel Aviv to Jerusalem. The Palestinians claim Israeli-annexed east Jerusalem as their capital, and have warned that moving the embassy would cross a “red line” and undermine negotiations over one of the most sensitive issues in the Israeli-Palestinian conflict.

The atmosphere in Israel has also been charged following the manslaughter conviction last week of an Israeli soldier who fatally shot a Palestinian attacker who had stabbed two Israelis, had been badly wounded and was lying on the ground.

Eytan Rund, a tour guide who said he shot the attacker Sunday, said the many soldiers in the area were slow to respond. He said he believed the “hesitation” was connected to last week’s verdict.

Israel says the violence is driven by a Palestinian campaign of incitement, while Palestinians say it’s the result of nearly 50 years of Israeli occupation and dwindling hopes for an independent state.

The Palestinian Hamas movement, an Islamic militant group that controls Gaza and has killed hundreds of Israelis in attacks over the years, praised the assault but stopped short of taking responsibility.

Hamas spokesman Abdul-Latif Qanou called it a “heroic” act and encouraged other Palestinians to do the same and “escalate the resistance.”

He said the attack proves the wave of Palestinian violence has not ended, despite a recent lull. “It may be quiet, it may linger, but it will never end,” he said.

Jerusalem Mayor Nir Barkat called on residents to be wary but carry on with their everyday life.

“Unfortunately, there is no limit to the cruelty of terrorists who spare no means in killing Jews and disrupting their way of life,” he said. “Those who incite and support terror must pay a heavy price.”