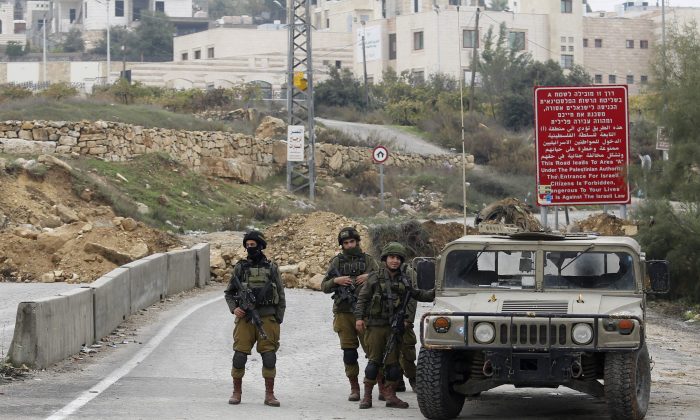 Israeli soldiers stand guard after the military blocked the road with an earth berm at one of the exits of the West Bank city of Hebron, on Nov. 7, 2015. Three incidents took place Friday in Hebron, the West Bank's largest city, which has been the main area of friction in recent weeks. Hundreds of combat troops guard about 850 Jewish settlers in the center of Hebron where they live amid tens of thousands of Palestinians. (AP Photo/Nasser Shiyoukhi)
Middle East

JERUSALEM—A Palestinian attacker rammed his vehicle into a group of Israelis standing at a hitchhiking station in the West Bank Sunday, wounding four of them before he was shot dead by paramilitary officers, Israeli police said.

Police spokeswoman Luba Samri said two of the Israelis were moderately wounded in the attack, the latest in nearly two months of violence across the region.

Later, the Israeli military said a Palestinian woman stabbed a security guard at the entrance to a West Bank settlement. The guard was lightly wounded and shot the woman, wounding her.

Security camera footage showed the woman wearing a black, full-length robe and a veil over her hair chatting with the guard and handing over documentation. As he looks down to inspect her papers, she reaches into her purse to pull out a long-bladed knife and swings it in his direction as they both fall out of the frame.

Hours later, the military said an Israeli man showed up at a West Bank checkpoint with a wound to his stomach. He said he was stabbed while shopping in a Palestinian village.

In addition to stabbings, Palestinians have also carried out shooting attacks and used vehicles to attack Israelis.

The bloodshed was triggered by unrest at a major Jerusalem shrine revered by both Muslims and Jews, and quickly spread to Israel, the West Bank and the Gaza border.

Israel has blamed the violence on incitement by Palestinian political and religious leaders. Palestinians say the violence is rooted in a lack of hope for gaining independence after years of failed peace efforts.

Also Sunday, Israeli police said officers arrested an Israeli youth who attacked a human rights activist last month. Footage of the attack showed a masked youth attack Rabbi Arik Ascherman and threaten him with a knife as he and other Israeli peace activists helped Palestinians harvest their olive trees.

Police also said that an officer wounded in a Palestinian attack earlier this month had died of his wounds.

Later, militants in the Gaza Strip fired a rocket at Israeli that exploded in the south of the country causing no injuries or damage, the military said. Gaza militants inspired by the Islamic State group have taken responsibility for recent rocket attacks. Israel holds the Islamic militant group Hamas that rules Gaza accountable for all attacks emanating from the territory.