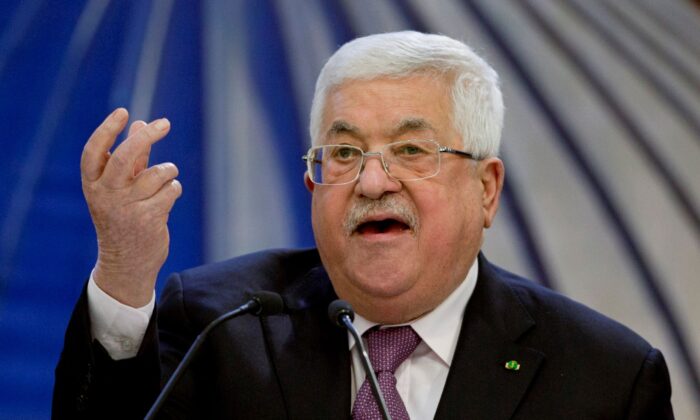 Palestinian President Mahmoud Abbas speaks after a meeting of the Palestinian leadership in the West Bank city of Ramallah on Jan. 22, 2020. (Majdi Mohammed/AP Photo)
Middle East

The pair met at Gantz’s home in Israel, marking the second meeting between the pair since Abbas hosted Gantz in August in the occupied West Bank city of Ramallah, Israel’s public broadcaster Kan reported.

Gantz told Abbas that he intended to “continue to promote actions to strengthen confidence in the economic and civilian fields, as agreed during their last meeting,” a statement from the Israeli Defense Ministry said.

“The two men discussed security and civil matters,” the statement added, noting that the meeting lasted for roughly two and a half hours.

Gantz confirmed the meeting in a statement on Twitter, saying that he and Abbas “discussed the implementation of economic and civilian measures.”

They also “emphasized the importance of deepening security coordination and preventing terror and violence – for the well-being of both Israelis and Palestinians,” Gantz said.

His office said in a statement that the defense minister “emphasized the shared interest in strengthening security cooperation, preserving security stability, and preventing terrorism and violence.”

Al-Sheikh said the pair discussed the “importance of creating a political horizon,” for the solution of the decades-old Israeli-Palestinian conflict. The last round of peace talks collapsed in 2014.

“The meeting dealt with the importance of creating a political horizon that leads to a political solution … as well as the tense conditions in the field due to the practices of settlers,” al-Sheikh said on Twitter.

Their talks mark the highest-level public meetings between Abbas and an Israeli minister since Israel’s new government was formed in June.

The Palestinians seek an independent state in the West Bank and Gaza with a capital in east Jerusalem. Israel captured those territories in the 1967 Middle East war.

The Palestinians have limited self-rule in the West Bank. Israel annexed east Jerusalem in a move unrecognized internationally and in 2005 pulled out of Gaza, which is now controlled by the Islamist terrorist group Hamas.

Former President Donald Trump recognized Jerusalem as the capital of Israel on Dec. 7, 2017, saying, “We are not taking a position of any final status issues, including the specific boundaries of the Israeli sovereignty in Jerusalem, or the resolution of contested borders.”

The status of Jerusalem—home to sites holy to the Muslim, Jewish and Christian religions—is one of the thorniest obstacles to forging a peace deal between Israel and the Palestinians, who want East Jerusalem as their capital.

Hamas, which has fought several wars with Israel, condemned the Abbas-Gantz talks.