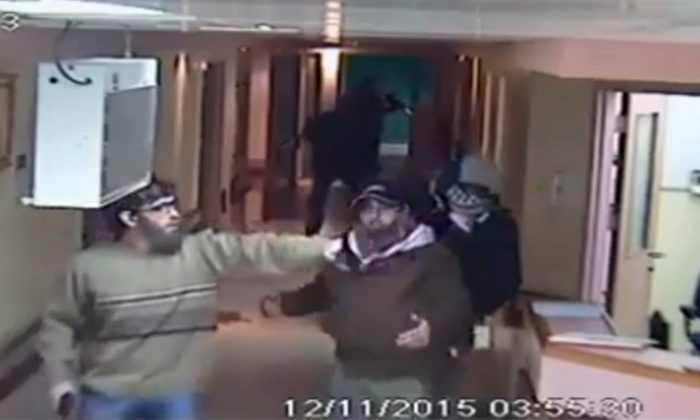 This image made from CCTV video released by Al-Ahli Hospital shows an arrest raid seeking a stabbing suspect by Israeli forces disguised in fake beards in Hebron on Thursday, Nov. 12, 2015. (Al-Ahli Hospital via AP)
Middle East

RAMALLAH, West Bank—Israeli forces disguised in traditional Arab outfits, including one impersonating a pregnant woman and others appearing to have fake beards, burst into a hospital overnight Thursday, killing one man during a daring arrest raid caught on video that outraged Palestinians.

The raid occurred in Hebron, a volatile city in the southern West Bank that has been a frequent flashpoint of violence during weeks of Israel-Palestinian unrest.

Jihad Shawar, director of Al-Ahli hospital, said more than 20 undercover Israeli forces entered the hospital overnight. They went to the surgical unit, where they pulled out their guns and stormed a room where Azzam Shalaldeh was being treated for gunshot wounds, he said.

The forces handcuffed Shalaldeh and a brother who was in the room, then shot and killed another brother, 27-year-old Abdallah, as he emerged from a bathroom, Shawar said.

“This is an outright crime,” Shawar said. “No one should violate hospitals, but Israel did.” Osama Najjar, the spokesman for the Palestinian Health Ministry, called the incident an “assassination,” saying he believed Israel intended to kill Abdallah Shalalbeh.

The Israeli military said troops shot a man at the hospital while they were there to arrest a suspect in a stabbing attack. It claimed the man had tried to attack the troops, but gave no further details and would not say whether undercover troops had participated.

The hospital, however, provided security camera video to The Associated Press showing about a dozen men walking down a hospital corridor, pushing someone covered in a blanket in a wheelchair. The person in the wheelchair flings the blanket off, stands up and, with the other men, draws a gun and continues walking.

The men are joined by what appear to be two women, one wearing a niqab, a garment covering the face and body, and the other appears to be pregnant, and has her hand on her lower back as she walks with the group of men.

Minutes later, the men, some wearing traditional Palestinian scarves and others donning what appear to be fake beards and moustaches, push a man in a wheelchair, apparently the suspect, back down the hall, as perplexed nurses look on.

Azzam Shalaldeh was being treated at the hospital for gunshot wounds, which the military said were sustained when the Israeli he stabbed last month shot him. It said he was about 20 years old and comes from a family of “known Hamas operatives.”

The incident is not the first time Israel’s undercover forces have been caught on camera since a current wave of Israeli-Palestinian violence began two months ago. Last month, a group of men posing as Palestinian protesters and mingling with rock-throwers in the West Bank were filmed suddenly drawing their weapons and arresting a protester.

The Israeli army and police both maintain undercover units that are used primarily in arrest raids. The operations are meant to take place quickly, and Israeli troops are typically stationed nearby to provide backup. The antics of these units have even spawned a primetime drama in Israel called “Fouda,” which tells the story of fictional undercover agents.

Other security capers have also been filmed. Perhaps most infamously, Israeli Mossad agents are widely believed to have been behind the 2010 assassination in Dubai of a Hamas weapons smuggler, in a well-coordinated hit in a five-star hotel that caught the agents, in tennis outfits and blonde wigs, on camera.

Undercover forces also entered a hospital in the West Bank city of Nablus last month to arrest a Palestinian who was wounded after he and others were suspected of shooting to death two Jewish settlers. Police have entered a hospital in Jerusalem to extract files about patients involved in rock-throwing.

The violence erupted in Jerusalem over tensions surrounding a holy site sacred to both Jews and Muslims and quickly spread throughout Israel, the West Bank and the Gaza Strip.

Hebron, the largest West Bank city, has been a particular flashpoint. Several hundred Jewish settlers live in fortified enclaves in the city, amid tens of thousands of Palestinians.